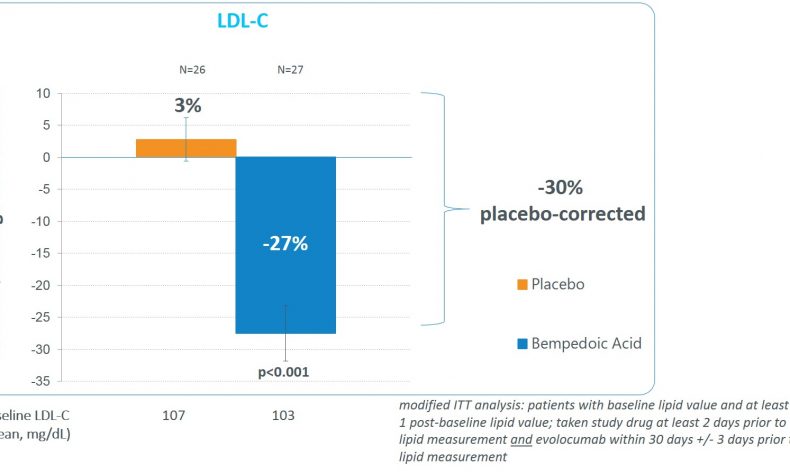 Investors cheered the news, sending Esperion stock up $6.45 a share, up 9 percent, to $78.24 a share in early trading Tuesday.

The test evaluated bempedoic acid added on to another drug called a BPSK9 inhibitor. The test group included 58 patients with high cholesterol.

The eight-week study met its primary endpoint with additional LDL-C lowering totaling 30 percent. The LDL-C lowering for the bempedoic acid group was 27 percent from baseline, as compared to an increase of three percent for the placebo group. Patients treated with bempedoic acid also achieved a significantly greater reduction of 34 percent in high-sensitivity C-reactive protein (hsCRP), an important marker of the underlying inflammation associated with cardiovascular disease, compared to the placebo group which had a reduction of 2 percent.

The total number of patients now treated with bempedoic acid in completed Phase 2 and Phase 3 clinical trials is 947. Of these, six patients (0.63 percent) had elevations in liver function tests. This rate of elevations in liver function tests is consistent with the rate observed in previous clinical trials and with all other previously approved oral LDL-C-lowering therapies, including statins and ezetimibe.

To listen to a replay of a conference call discussing these results, visit http://investor.esperion.com.

Esperion initiated its global, pivotal, Phase 3 clinical development program in January 2016 to evaluate the safety, tolerability and consistent, complementary LDL-C-lowering efficacy of bempedoic acid and the bempedoic acid / ezetimibe combination pill in patients with atherosclerotic cardiovascular disease (ASCVD), or who are at a high risk for ASCVD, with hypercholesterolemia who continue to have elevated levels of LDL-C despite the use of maximally-tolerated statins and ezetimibe, leaving them at high risk for cardiovascular events. The program includes five studies in approximately 4,000 patients, four for bempedoic acid and one for the bempedoic acid / ezetimibe combination pill.

Esperion plans to submit New Drug Applications (NDAs) to the U.S. Food and Drug Administration (FDA) for bempedoic acid and the bempedoic acid / ezetimibe combination pill for LDL-C-lowering indications by the first quarter of 2019. Additionally, Esperion plans to submit Marketing Authorization Applications (MAAs) to the European Medicines Agency (EMA) by the second quarter of 2019.

High levels of LDL-C can lead to a build-up of fat and cholesterol in and on artery walls (known as atherosclerosis), potentially leading to cardiovascular events, including heart attack or stroke. In the U.S., 78 million people, or more than 20 percent of the population, have elevated LDL-C; an additional 73 million people in Europe and 30 million people in Japan also live with elevated LDL-C. There are approximately 13 million people in the U.S. with atherosclerotic cardiovascular disease (ASCVD) who live with elevated levels of LDL-C despite taking maximally-tolerated lipid-modifying therapy — including individuals considered statin intolerant — leaving them at high risk for cardiovascular events. The vast majority of these patients, 9.5 million, require less than 30 percent additional LDL-C lowering to achieve treatment goals.

Esperion’s mission is to deliver once-daily, oral therapies that complement existing oral drugs to provide the additional LDL-C lowering that these patients need.