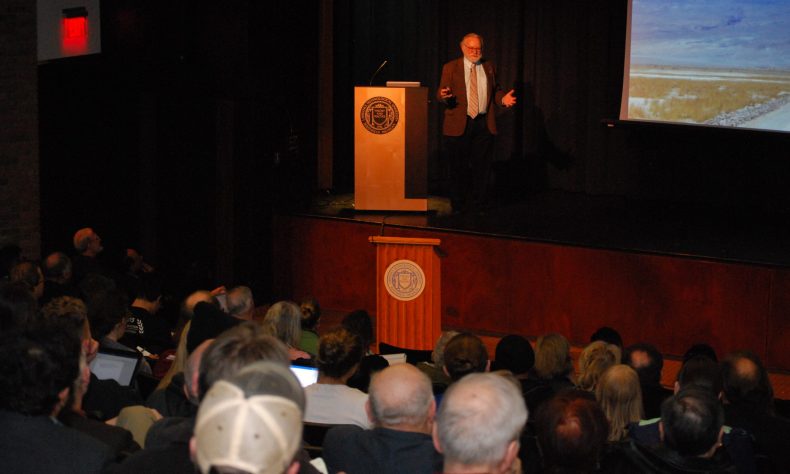 SOUTHFIELD – A molecular biology researcher whose discoveries are on the cusp of providing new treatments for some of humanity’s most dreaded diseases provided a fascinating lecture at Lawrence Technological University Tuesday night.

Peter Walter is a distinguished professor of biochemistry and biophysics at the University of California at San Francisco and an investigator for the Howard Hughes Medical Institute. He delivered LTU’s annual Walker L. Cisler lecture, one of the highlights of the university’s academic calendar.

Walter said some of the most remarkable findings of his research – molecules that cure cancer in mice and even make them smarter – were completely unexpected, underlining the importance of basic research, where scientists often have no idea what they might discover.

Walker first took the audience through a basic understanding of the importance of proteins, “the molecular machines of life.” In cells, various proteins function to convert metabolites to useful energy, create mechanical forces, provide rigidity, send and receive signals, and switch genes on and off. The average human cell – of which everyone has 10 trillion, over 1,000 times more than there are people on Earth – makes 1.5 million new proteins an hour.

Those proteins are created in a part of the cell called the endoplasmic reticulum, where they are both made and folded into proper shapes. The folded shape of proteins is crucial to their function –misfolded proteins are implicated in a wide variety of diseases.

Walter called the unfolded protein response “a finely tuned governor of protein health.” When it goes haywire by killing too many cells that aren’t producing badly folded proteins, diseases like retinitis pigmentosa and diabetes result.

When it goes haywire the other way, protecting cells that should die, diseases ranging from viral infections to cancer result.

Walter’s lab has developed molecules that affect protein folding, and provided several examples of molecules developed in his lab that stopped cancer growth in its tracks in early stage animal studies,  curing mice of multiple myeloma and metastatic prostate cancer.

Then there was an entirely unexpected effect of a molecule called ISRIB. “It is a cognitive enhancer,” he said. “It allows mice to have better long term memory.”

Mice treated with ISRIB were far better at learning how to navigate mazes than their untreated brethren. Incredibly, ISRIB even restored full brain function to mice with traumatic brain injury.

This effect, Walter said, could mean new treatments for Alzheimer’s and Parkinson’s diseases, not to mention treatment for the normal loss of brain power caused by aging.

According to media reports, this discovery has touched off a scientific storm – labs are seeking to duplicate the results, ISRIB has been licensed to a subsidiary of Google for commercial development, and some “brain hackers” have even attempted to make the molecule themselves and ingest it, against all advice. Walter is confident but realistic about the prospects.

“Mouse brains are very different from human brains, so we have no idea what will happen in human brains, but we have licensed ISRIB to a company that is developing preclinical studies,” Walter said. 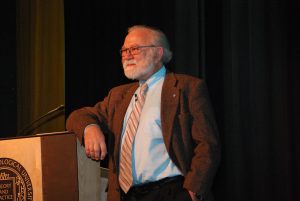 Ultimately, Walter said, his goal is to “understand the precise molecular mechanisms that control the fate of cell proteins, modulate those mechanisms in disease models, translate from animal models to humans, and assess safety and utility for therapeutic intervention in clinical trials.”

What he called his “10-year dream” was: “Develop novel cures for cancers, cognitive disorders, and other diseases by targeting the Achilles’ heels of entire disease classes. And develop preventive measures that will keep cell proteins healthy and nudge society further from ‘sick care’ to ‘health care.’”

He noted that his research was “initially disease agnostic – we just wanted to understand how these molecules function and how we can modulate them.” He also said the research was “not predictably translational,” meaning it initially showed little commercial potential. Walter noted that agencies that fund research want to see that potential, “which in my view is completely misguided and completely wrong.”

In introducing Walter, Lawrence Tech Professor Hsiao-Ping Moore noted that he has won virtually every major scientific prize except the Nobel. Included are the $3 million Breakthrough Prize in Life Sciences, the Vicek Prize, given to immigrants who make a major mark on American science – Walter was born in Germany and came to the United States as a student – and half a dozen other major awards.

He told students in the audience to continue pursuing their scientific curiosity, whether or not there was an immediate payoff. As Moore said, “When your parents or friends or anyone else asks, ‘Why are you studying that?,’ show them this work.”

More information about Walter’s lab is available at http://walterlab.ucsf.edu/.

The Walker L. Cisler lecture series was founded at LTU with a generous gift from the Holley Foundation. It began in 1995.

Well known for his leadership of the Detroit Edison Co. from 1954 to 1971, Walker L. Cisler enjoyed a career that spanned a lifetime of personal, professional, civic, and business accomplishments. As an international ambassador for the American electric utility industry, he worked closely with heads of state both here and abroad. As a tireless, dedicated humanitarian, he strived to improve the quality of life for people everywhere.

Lawrence Technological University, www.ltu.edu, is a private university founded in 1932 that offers more than 100 programs through the doctoral level in its Colleges of Architecture and Design, Arts and Sciences, Engineering, and Management. PayScale lists Lawrence Tech among the nation’s top 100 universities for the salaries of its graduates, and U.S. News and World Report lists it in the top tier of best Midwestern universities. Students benefit from small class sizes and a real-world, hands-on, “theory and practice” education with an emphasis on leadership. Activities on  Lawrence Tech’s 107-acre campus include more than 60 student organizations and NAIA varsity sports.