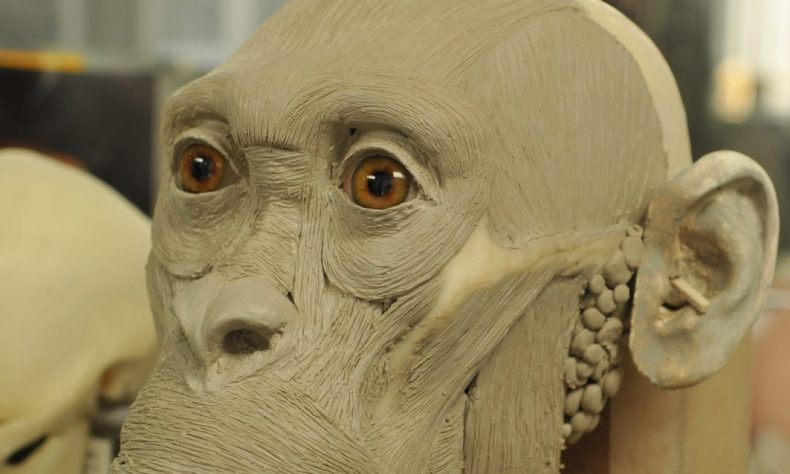 ANN ARBOR—When the University of Michigan Museum of Natural History reopens in its new home about a year from now, visitors to the evolution gallery will come face to face with a life-size, hyperrealistic sculptural reconstruction of an extinct human relative that roamed southern Africa 2 million years ago.

The Australopithecus sediba sculpture is expected to be a real crowd pleaser, but for now it remains in its shipping crate, awaiting installation later this year. The museum commissioned the sculpture—which is believed to be the only full-body, fleshed reconstruction of A. sediba anywhere—from the renowned Daynès Studio in Paris and took delivery last month.

“We had to open the crate to confirm that it wasn’t damaged during shipping, and everyone in the room was just floored by its lifelike appearance,” said U-M paleontologist Michael Cherney, who is overseeing the selection of fossil- and evolution-related exhibits for the new museum.

“There’s definitely a shock factor, because she’s gazing right into your eyes and looks like a living creature that has paused mid-step,” Cherney said.

The adult female stands fully upright and is just 45 inches tall. The hairy body is recognizably human, but the head is chimp-like. The reconstruction is based on fossil bones recovered from a South African cave in 2008.

A panel of U-M experts advised the museum on the acquisition.

“What the bones tell us is that they would have been fully erect, not crouched at the hip and knee like chimps and gorillas, and that’s something we really wanted to get right in this model,” said U-M paleoanthropologist Laura MacLatchy, a member of the faculty advisory group, which also included Holly Smith of the Museum of Anthropological Archaeology, William Sanders of the Museum of Paleontology and John Speth, emeritus professor of anthropology.

“Mike opened the crate for me, and I was spellbound,” MacLatchy said. “There’s a lot of humanity in the face, and I was really struck by that. And as a scientist, I was very pleased with the proportions of the limbs, the posture and the stance. It’s very representative of how scientists have interpreted the bones.”

The Daynès Studio in Paris is the most well-known and prominent studio creating life-size reconstructions of extinct hominids, Cherney said. The studio produced several models for the Field Museum in Chicago, including a Neanderthal and one of “Lucy,” the famous Australopithecus afarensis specimen from Ethiopia.

The Lucy reconstruction reportedly holds visitors’ attention longer than any other exhibit in the Field Museum’s Evolving Planet display. U-M museum officials were eager to acquire something similar, but they wanted an extinct hominid species that no other museum possessed.

After some discussion, they settled on Australopithecus sediba.

“One of our goals in creating the new museum is to capture the imagination of our visitors with unique and memorable exhibits and what we call wow experiences,” said Amy Harris, director of the U-M Museum of Natural History. “I’m certain our visitors will be fascinated by this one-of-a-kind reconstruction of Australopithecus sediba.”

In a 2010 Science paper describing their find in South Africa’s Malapa Cave, members of the discovery team suggested that A. sediba represents a new species transitional between australopithecines and our own genus, Homo.

But some other scientists say that’s probably not the case and that A. sediba is likely not a direct ancestor of modern humans. Even so, A. sediba demonstrates that a variety of human-like creatures once roamed Africa, Cherney said.

“If you go back several million years, there were multiple species of humanlike hominids moving along different evolutionary trajectories, and one of them eventually led to humans,” Cherney said. “This reconstruction of Australopithecus sediba helps make the point that our evolutionary tree is actually very diverse.”

Displayed alongside the sculpture in the new museum will be a cast A. sediba skeleton made from the bones of two specimens recovered in Malapa Cave. The composite skeleton was made from the nearly complete skull of a juvenile male and the mostly complete postcranial skeleton (meaning all the bones behind, or posterior to, the cranium) of an adult female.

To make the heads of her sculptural reconstructions, paleoartist Elisabeth Daynès starts with a cast of the skull and uses clay to mold facial muscles directly onto it. The result is an écorché, an anatomical model with the skin removed to display the underlying musculature.

The écorché is then covered with a layer of clay that simulates facial skin. Small features such as wrinkles and scars are sculpted into the facial clay. A cast is then made, and details such as veins and spots are painstakingly hand painted onto the surface.

Glass eyeballs are added, and hairs are implanted on the head and the rest of the body, one at a time. The A. sediba sculpture contains a mix of human and yak hair, according to the studio.

“A. sediba was one of the most fascinating reconstructions I have ever had a chance to make because of the rich postcranial information and an almost complete skeleton, including a complete hand,” Daynès said.

“As the reconstruction was taking shape, I was more and more moved by this little, delicate and elegant being that was forming in front of me. Sediba’s rich bone material and extreme grace made that reconstruction the true result of the combination of emotion, art and science.”

U-M’s new Museum of Natural History will be inside the Biological Sciences Building, which is under construction next to the museum’s former home, the Ruthven Museums Building. The Ruthven museum closed at the end of last year.

Funding for the A. sediba reconstruction was included in the museum project budget.