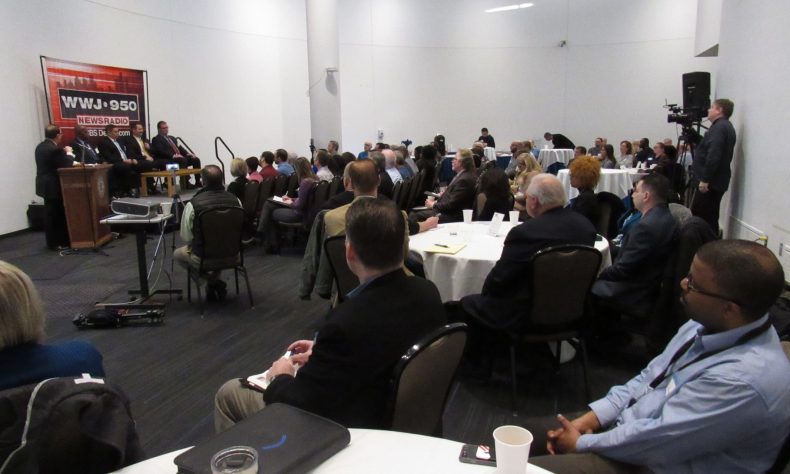 Those are the strategies to use against today’s universal need for workplace security, according to a panel discussion held Thursday morning at Lawrence Technological University. The event was part of the “Leaders and Innovators” business discussion series presented by LTU and WWJ Newsradio 950.

The phrase “active shooter” and recent tragedies at schools, workplaces and entertainment venues across the country makes the need for workplace security plans obvious, panelists said.

That generally begins with a meeting with senior management and a decision to bring in a consultant to study a workplace’s security profile. That includes studying the nature of crime in the area of the employer, the physical layout of the office or plant, and the presence or absence of security technology like cameras or access control. Measures like a panic button or automatic door lock button in reception areas were advised.

Human resources must also be involved. “Let’s say I know ‘Kevin,’ he’s worked here for years, and I’m always going to let him in,” said Jason Tague, director of strategic accounts at Guardian Alarm in Southfield. “But maybe he got terminated yesterday and I don’t know that. So HR has to be involved.”

Panelist Kevin Heidisch, director of security at the Detroit Athletic Club, advised background checks, not just on employees, but also the employees of vendors, to look for signs of violent tendencies.

Panelists also advised paying extra attention to anyone wearing a uniform, like those of utility workers or package delivery couriers. They’ve been able to gain access to backroom operations areas in banks and other supposedly secure workplaces.

“Some of these things may seem inconvenient, but we have to realize that we have to change our approach (to security), for our own safety and the safety of our coworkers,” Tague said.

All panelists advised training in the three measures of responding to an active shooter – run, hide, and fight. First, run if you can. Second, hide if you can’t run. And as a last resort, use whatever weapon you can to fight.

Steven Bogdalek, executive director of campus safety at Lawrence Tech, advised attendees to plan for a backup location for their business after an active shooter incident, just as they would after a natural disaster. After a shooting, an office becomes a crime scene, and authorities may not let workers back in for days or weeks while they collect evidence.

The need for such plans is a necessity these days, Edwards said. “I go downtown and all I see is the barricades around the McNamara Federal Building,” he said. “It makes me want to throw up, but that’s the world we live in.”

Bottom line, Edwards said, “Awareness is first and foremost … Be aware of your surroundings. And share your knowledge. You see anything suspicious, share it with someone you trust.”

The next Leaders and Innovators event will be “A Crash Course in Networking.” It will take place Thursday, April 19 at the LTU University and Technology Center Gallery, with networking at 7:30 a.m. and the program from 8 to 9 a.m. To register, visit this link.