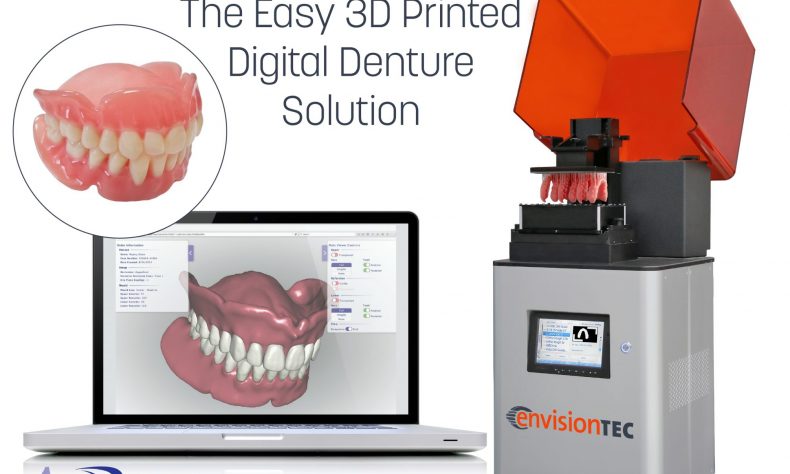 LMT Lab Day Chicago 2018 is a gathering of dental laboratory owners, managers, technicians and clinicians from more than 40 countries to look at the latest technology for dental manufacturing.

The company said E-Ortholign meets the biocompatibility, stability, flexion and strength requirements for a first aligner, is progressing through regulatory approval processes.

EnvisionTEC now offers more than a dozen resins that can now be used for dental models, castables, appliances and restorations. Seven of EnvisionTEC’s dental material offerings are also FDA approved.

All of EnvisionTEC’s dental materials can be processed on the company’s powerful and flexible DLP machines, such as the Vida and Micro desktop 3D printers.

Priced at $175 per kilogram, E-OrthoShape is a grey ABS-like material that prints in 100 micron layers. It is recommended for the affordable volume production of models on which to produce clear thermoformed aligners. E-OrthoShape can be printed on any of EnvisionTEC’s DLP machines.

E-Ortholign, meanwhile, meets the needs of a first aligner — a device that is used after an orthodontist removes a patient’s brackets to hold teeth in place, before the treatment is completed with a series of thermoformed aligners.

With an EnvisionTEC 3D printer, a first aligner can easily be created in an office or lab after an impression or scan is taken of a patient’s teeth following the bracket removal. The tray can be created while a patient waits and before standard thermoformed aligners are manufactured, a process that takes design and manufacturing time.

EnvisionTEC also launched its largest printer ever based on its patented continuous 3D printing technology. With a print speed of about 20-50 mm per hour, depending on material, the Vida cDLM prints models in about half the time as the company’s best-selling Vida desktop 3D printer.