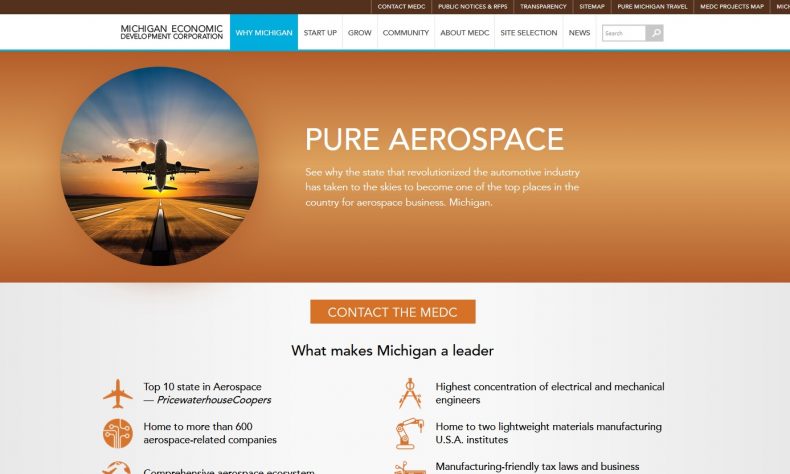 Michigan Gov. Rick Snyder and a state delegation thought an event could highlight its place in the global aerospace market, and the Pure Michigan Business connect Aerospace Summit was born.

The event will be held Wednesday, Feb. 21 at Little Caesars Arena in Detroit. It will be the largest aerospace business gathering ever hosted by the state.

More than 20 global purchasers will be on hand to connect with more than 430 Michigan suppliers to the international aerospace industry. The summit will provide the opportunity for Michigan companies to conduct one-on-one mpitches with aerospace industry purchasers from the West Coast and around the world.

“PMBC brings multiple buyers and suppliers together in one place for one day, saving business development teams time and resources,” said Jeff Mason, CEO of the Michigan Economic Development Corp.

Since 2011, PMBC summits have brought together purchasers and suppliers in diverse industries, including agriculture, automotive, aerospace, manufacturing and energy. The matchmaking gatherings have facilitated $5.73 billion in revenue for Michigan companies, while creating or retaining 27,941 jobs.

“Michigan is the ideal location for aerospace supply chain and engineering companies, and many of the most innovative and proven suppliers in the industry,” said Trevor Pawl, vice president, international trade and procurement programs for the MEDC. He noted nine of the 10 largest U.S.-based aerospace and defense R&D firms are located in the state.

“The aerospace industry supply chain has many similarities to the automotive industry supply chain with tiers of suppliers, original equipment manufacturers, and maintenance and repair operations,” Pawl said. “The summit is a timely and strategic gathering that is considered a catalyst for economic growth in one of the state’s top growing industries.”

Caravan Facilities Management, a minority-owned company based in Saginaw, will be among the more than 400 participants at the Aerospace Summit. The company received a $300,000 contract from Kuka, a Chinese-owned German manufacturer of industrial robots, based on participating at the 2016 PMBC Flint Matchmaking Summit.

At the summit, purchasing companies submit a list of procurement needs. In turn, suppliers respond either immediately or through PMBC’s online application.

Michigan’s aerospace and defense companies maintain contracts with Boeing, Lockheed Martin, Pratt & Whitney and NASA. Defense-related procurement contracts and grants increased by 7.5 percent from $2.81 billion in 2014 to $3.03 billion in 2016, according to the Michigan Defense Center. A major attraction for purchasers and companies looking to locate in Michigan is the state’s diverse landscape of research-and-development facilities, and nation-leading concentration of engineers.

According to PricewaterhouseCoopers survey conducted in 2017, Michigan ranks second as most attractive state for aerospace manufacturing and R&D facilities based on operating costs, taxes, industry size, talent, and education attainment.

Michigan ranks only behind California and Texas in occupations in primary demand by aerospace industry, and aerospace-related employment in the state grew by 36 percent from 2010-17, the fastest in the nation during that period.

In addition to organizing the aerospace summit, PMBC arranges tours for suppliers (such as Boeing Research and Technology) to meet Michigan companies. PMBC’s involvement with Boeing has resulted in more than 500 contracts and purchase orders worth over $15 million awarded to Michigan companies since 2013.