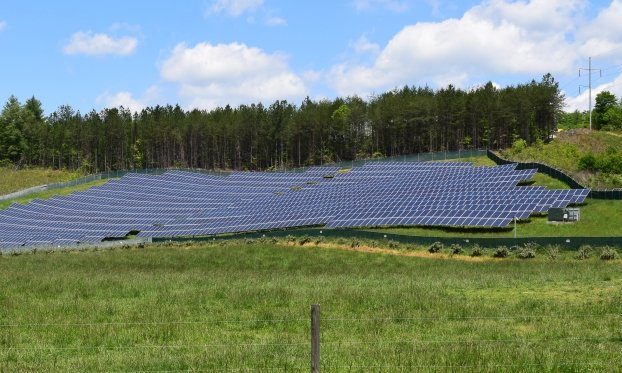 HOUGHTON — Although tobacco use is the leading cause of avoidable death globally, farming tobacco continues to provide the primary source of income to many farmers. But two Michigan Technological University researchers contend that converting tobacco fields to solar farms could profitably serve two purposes: Reduce preventable deaths and meet the growing need for solar energy to combat climate change.

As demand for solar energy grows, so does the demand for land for solar farms. “To completely eliminate the need for burning fossil fuels, solar technology requires large surface areas,” Pearce said.

However, as demonstrated by the conversion of cropland to energy for ethanol production, removing arable land from food production can cause a rise in global food prices and food shortages. Targeting land that grows crops with known health hazards for solar energy production removes a detrimental consequence from the equation, the researchers say, and the potential to convert tobacco fields to solar arrays could provide an opportunity for farmers to increase their profits thousands of dollars per acre per year by moving from tobacco to solar.

Krishnan and Pearce selected North Carolina for their case study because it is a major tobacco-producing state with large swaths of land and high solar potential.

Tobacco crop lands provided an interesting opportunity because tobacco use in America is declining and has well-documented bad impacts on human health. Pearce notes that tobacco continues to be farmed in the U.S. today because farmers can make money doing it.

“We were interested in what conditions were needed to enable tobacco farmers to begin installing solar energy systems on the same land,” he says. “We looked at likely trends in all of the major economic factors, but were surprised to find that because the cost of solar has dropped so dramatically it is already economically advantageous for tobacco farmers to replace tobacco with solar in many situations.”

Energy of the Future

Krishnan and Pearce conducted a sensitivity analysis on the economic factors of the installed solar farms and their effects on profit. They compared solar profit and the profit available for simply farming tobacco per acre per year.

They used conservative positive assumptions on tobacco crop yield and price, noting there could also be a decrease in demand for tobacco as fewer people take up smoking and existing smokers die. They then looked at how much the price of electricity could increase each year based on a range of past increases (called the escalation rate, which ranged from 0.3 percent in 2010 value to 5.7 percent in 2008 value). As electricity becomes more valuable because of a higher escalation rate, solar energy produced in the future becomes more valuable. Even with relatively modest escalation rates, solar electricity provides tremendous profits of thousands of dollars to tens of thousands of dollars more per acre per year for land owners.

Escalation rates and the associated value of electricity in the future are presented in the paper over a wide range. Similarly, calculations for the costs of the solar installation varied from $2 per watt (expensive in today’s market in which solar farms have come in at $1 per watt) to realistic potential reduced costs in the future of 80 cents per watt. The sensitivity analysis presented in the paper allows farmers to make their own educated guesses on inputs based on what their local utility’s electric rates and what price the farmers are quoted for a photovoltaic farm on their land, then make the decision that makes the most sense for them. To determine whether a solar photovoltaic farm would work on their land, tobacco farmers should calculate the LCOE (levelized cost of electricity) for their solar farm and compare it to the price of electricity in their particular location, rate structure, and load, as well as economic factors. More details are provided in the paper on these calculations.

If every tobacco farm in North Carolina converted to solar energy production, there is the potential to generate 30 gigawatts, which is equivalent to the state’s peak summer load. In the long run, tobacco farmers stand to make more money farming solar rays for energy instead of growing a component of cigarettes.

The primary reason holding back tobacco farmers is the capital cost of the solar system. Currently, a 10-megawatt solar farm priced at $1 per watt to install – $10 million.  To help farmers make such a conversion, Pearce argues, governments in tobacco states should begin exploring policies to ease the transition. Many tobacco farmers would need to rely on investors to deploy solar. Local governments could also aid the transition by making policies to help provide access to the needed capital to help land owners transition.

In addition to the economic and environmental benefits, the researchers estimate conversion of North Carolina’s tobacco fields would save 2,000 American lives per year from pollution reduction alone by offsetting coal-powered electricity.

Based on numbers from the Centers for Disease Control, if all tobacco use is eliminated by replacing tobacco farms in the U.S. with solar farms, more than 480,000 American deaths per year from cigarette smoking are directly saved. In addition, 42,000 deaths resulting from Americans suffering the effects secondhand smoke would also be saved per year.

All together this represents a total of over half a million premature deaths prevented in the U.S. directly every year.

“The economic benefits for ex-tobacco farmers going into solar is nice, but the real payoff is in American lives saved from both pollution prevention and smoking cessation,” Pearce said.