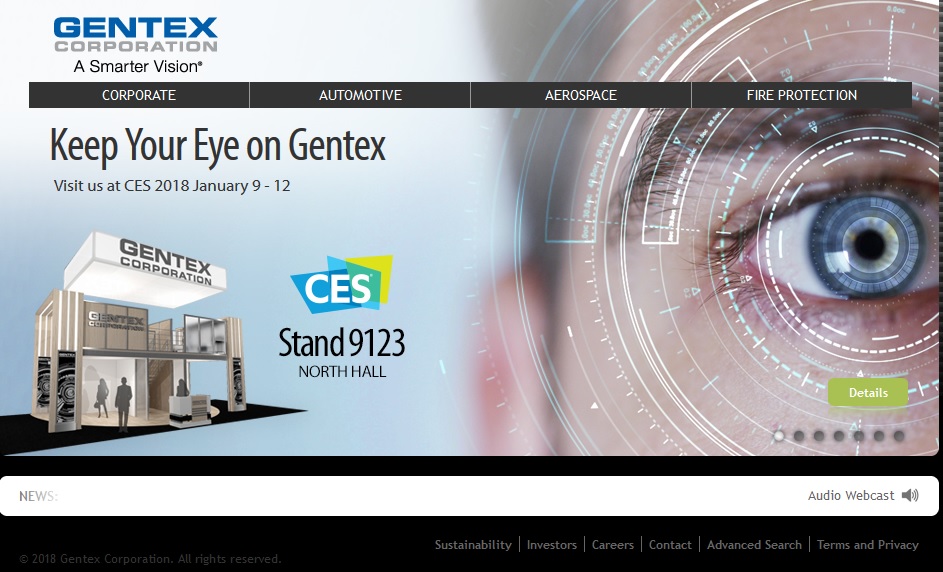 ZEELAND — Gentex Corp. (Nasdaq:GNTX), the Zeeland-based manufacturer, reported net income of $130.5 million or 46 cents a share for the fourth quarter, up from $88.8 million or 31 cents a share in the same quarter a year earlier.

The increase in profits came from a much smaller provision for income taxes in the fourth quarter — $7.7 million, vs. $40.3 million a year earlier — that the company credited to passage of the Tax Cuts and Jobs Act.

The company said the fourth quarter sales increase was mostly due to a 13 percent increase in auto-dimming interior and exterior rearview mirror shipments on a quarter over quarter basis.

“We were pleased to see a solid rebound in revenue and unit growth during the fourth quarter of 2017 and to see continued gross margin improvement during the second half of the year, despite the fact that we have been battling against difficult comparisons in product mix and our typical annual price reductions,” said Gentex President and CEO Steve Downing.

“The next two years present many challenges due to a flat-to-down light vehicle production environment, but we are currently forecasting solid revenue growth for both 2018 and 2019,” Downing said. “The company recently showcased its expanding efforts to develop, market and sell, uniquely designed and engineered future-focused products at CES. We have received very positive feedback from our customers who visited us at CES where we were able to demonstrate Gentex technology in mirrors, digital displays, camera monitoring systems, large area dimmable devices and connected car technologies which we believe will deliver profitable growth and shareholder value for years to come.”

To listen to a replay of a conference call discussing these results, visit http://ir.gentex.com/WebcastArchives.

Founded in 1974, Gentex is a supplier of automatic-dimming rearview mirrors and electronics to the automotive industry, dimmable aircraft windows for aviation markets, and fire protection products to the fire protection market. More at www.gentex.com.