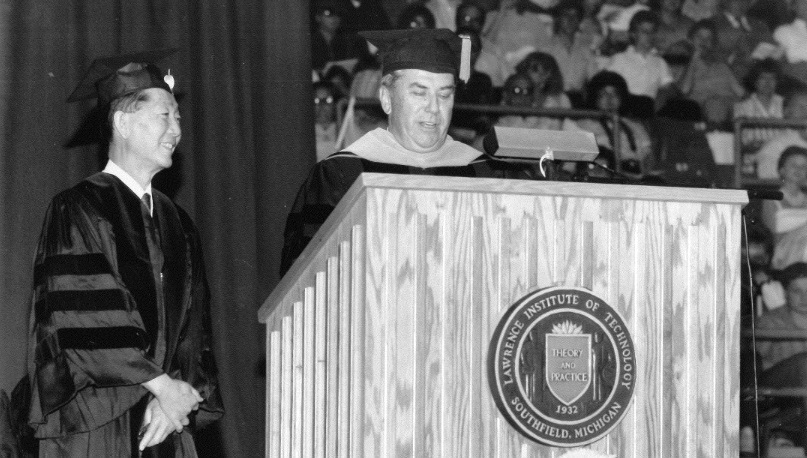 SOUTHFIELD – Minoru Yamasaki spoke of designing buildings that would prompt serenity, surprise and delight in those who viewed and used them. He spoke openly of “humanism” in architecture. But what does that really mean in a world of steel and concrete?

Trying to answer that question was Dale Allen Gyure, Lawrence Technological University associate chair of architecture, in a lecture Thursday night, “Minoru Yamasaki and the Search for a Humanist Architecture.”The great architect, whose career peaked with New York City’s World Trade Center and who died in 1986, was born in Seattle in 1912 to Japanese immigrant parents. He studied architecture at the University of Washington and moved to New York City in the 1930s, working part time as an architectural designer while paying the bills working in a factory that packed fine china for shipment.

His big break came in 1945, when he was recruited to come to Detroit to work for the firm Smith, Hinchman & Grylls, today SmithGroupJJR. His first major design was the Federal Reserve Bank annex, the first glass curtain-walled skyscraper in Detroit. He founded his own firm with two partners a few years later, and traveled between its offices in Detroit and St. Louis, Mo.

The German-born architect Ludwig Mies van der Rohe was his idol, and Yamasaki’s early work reflects Miesian spare simplicity and the use of the latest high-tech materials and construction methods. He worked mostly designing schools in and around Detroit in the early days. A signature work of his early career was the Lambert-St. Louis airport building, designed and built 1951-56, a series of soaring, flowing vaults made of thin-shell concrete.

It was after those visits that Yamasaki designed his masterpiece – the McGregor Memorial Conference Center at Wayne State University, designed and built in 1955-58. The building combines Miesian high tech and sharp angles with a soaring gothic cathedral-like atmosphere, screens borrowed from Islamic design, and a serene, Japanese-style garden and pond.

Other highlights of the period include the Reynolds Metals Regional Sales Office in Southfield, designed and built in 1955-59, and the Michigan Consolidated Gas Co. tower in Detroit, Yamasaki’s first true skyscraper, in 1958-63.

Projects after that included a Saudi Arabian airport that combined wild angles with Islamic arches, and a synagogue in suburban Chicago that looks like an abstract sculpture. Praise for his design of the U.S. Science Pavilion at the 1962 Seattle World’s Fair led to his submitting the winning bid for the World Trade Center.

Critics hailed the first design, submitted in 1962, but the second version that came out two years later – which Gyure said was not a major alteration – drew criticism.

Much of the change, Gyure said, was in the outdoor plaza between the twin towers, which in the original version was a lush green place to escape the modern world, but in the final version was a barren, windswept concrete plain broken only by a few sculptures. The change may have been driven by budget concerns, Gyure said, along with the fact that the plaza wouldn’t get much use, since most people entered and exited the building through an underground warren of subway stations and parking structures.

Gyure sounded like no big fan of the design either, though, saying that “what worked for him on a smaller scale like McGregor didn’t work on a large scale.”

Despite the criticism, Yamasaki continued to work as a skyscraper architect through the 1960s and ‘70s. Gyure said after the World Trade Center, Yamasaki was no longer cited in influential architectural publications. But he did continue to receive honors, including induction into the American Academy of Arts and Letters in 1982, and numerous honorary doctoral degrees, including an honorary Doctor of Architecture from Lawrence Tech in 1984. (He’s pictured receiving the degree at the top of this article.)

Gyure said Yamasaki repeatedly referred to himself as a humanist architect, a concept that first emerged in the Italian Renaissance in designs inspired by the measurements and symmetries of the human body, and which continued in 19th Century German architecture as an emotional connection to a building.

Yamasaki wrote and spoke about architecture that inspires “beauty and delight,” is “uplifting,” inspires “serenity,” and which is “truthful,” Gyure said. Of all the types of architectural humanism, Gyure said Yamasaki fit best into “psychological humanism … rejecting the cold, sterile International Style and its emphasis on functionalism,” and instead working toward “architecture that fulfills human psychological needs and desires.”

Touches like surprise skylights and screens, not to mention Japanese-style gardens, create buildings that provide a “refuge against the chaos of modern life,” Gyure said. He called it a “postwar architectural therapy session that attempted to assuage people’s anxiety about technology,” including the threat of nuclear war.

By the 1970s, architecture had moved on to new styles, but Gyure said he’d like to start a new conversation about the importance of Yamasaki’s work.

Gyure will continue the conversation about Yamasaki Thursday, Dec. 7 at Wayne State University, in Yamasaki’s McGregor Center, after a meeting of Wayne State’s Yamasaki Advisory Board. The lecture, focusing on Yamasaki’s World Trade Center, begins at 7:30 p.m. and will be followed by a book signing of Gyure’s new book, “Minoru Yamasaki: Humanist Architecture for a Modernist World.”