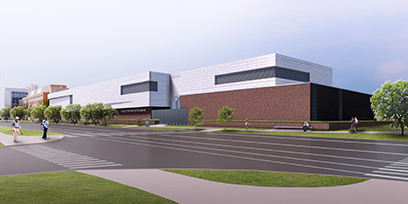 The AS&E program will bring together MSU’s strengths to formulate a graduate student curriculum that will be implemented by physics and astronomy faculty in the College of Natural Science, the College of Engineering and the Facility for Rare Isotope Beams, MSU’s new $730 million atom-smasher, now under construction on campus.

University officials said the program will address four major areas where there are critical workforce needs:

The U.S. Department of Energy Office of Science Office of High Energy Physics has awarded MSU a $990,000 grant to develop the program, which will train master’s degree and PhD students in accelerator science and engineering..

Peter Ostroumov, accelerator physics development manager at the Facility for Rare Isotope Beams, noted that it was the nation’s sole grant under the program for the federal government’s 2017 fiscal year, which ended Sept. 30. He called the grant “a great honor and responsibility.”

Students who complete the curriculum will be certified, well-trained and ready for productive careers in DOE laboratories and industry. Fulfilling these needs is critical to maintaining U.S. leadership in accelerator technology and enhancing economic growth.

“Development of this program is an outstanding example of the connection between the world-leading research being done at Michigan State and the education of the young people needed to maintain the scientific and technological leadership of the United States in areas of critical need,” said R. James Kirkpatrick, dean of MSU’s College of Natural Science.

MSU is currently building the Facility for Rare Isotope Beams, a $730 million national user facility supporting the mission of the Office of Nuclear Physics in the DOE-SC, funded by the DOE-SC, MSU and the state of Michigan. The heart of FRIB is a 400-kilowatt superconducting linear accelerator that will accelerate atomic nuclei to a significant fraction of the speed of light within a few hundred feet. The resulting atomic collisions provide scientists with clues about the early universe – and important advances in nuclear medicine and other fields.

“The collocation of a world-class accelerator and strong academic programs provides particular educational opportunities and value to the nation,” said Thomas Glasmacher, FRIB laboratory director. “Collaborating with MSU faculty to solve a national issue underscores the uniqueness and significant positive impact of establishing FRIB at MSU for the Office of Nuclear Physics in the U.S. Department of Energy Office of Science.”

Engineering Dean Leo Kempel said the College of Engineering will contribute its growing capabilities in radio frequency, cryogenics, accelerator and plasma technologies to the project.

The MSU traineeship program will be augmented with two adjunct faculty appointments at other DOE-SC national laboratories, Stanford National Accelerator Laboratory in Menlo Park, Calif., and Argonne National Laboratory in Lemont, Ill. Additionally, a national advisory committee has been established to help guide the program and its outcomes.

John Verboncoeur, associate dean for research in the MSU College of Engineering and grant co-principal investigator, said the trainee program is a crucial science and technology driver.

“The Department of Energy Accelerator Science and Engineering Traineeship program at MSU is an important component in maintaining the U.S. strength in accelerators, with broad economic and health impact beyond accessing extreme parameter regimes,” he said. “It will expand our knowledge of the universe, including medical imaging and therapy, materials modification and isotope creation.

In addition to fulfilling a national workforce need, the traineeship program opens doors to exciting careers that students may not even know exist.

“AS&E is a critical area of science and technology that is relatively unfamiliar to both undergraduate and graduate students,” said Philip Duxbury, chairperson of the physics and astronomy department and grant co-PI. “This DOE training program enables the department to build a highly visible program in this interdisciplinary area and to develop advertising and recruiting pipelines to ensure a strong pool of qualified graduates. The MSU cohort in AS&E will work in engineering, FRIB and/or the physics department, providing an excellent environment for students interested in all related career paths.”