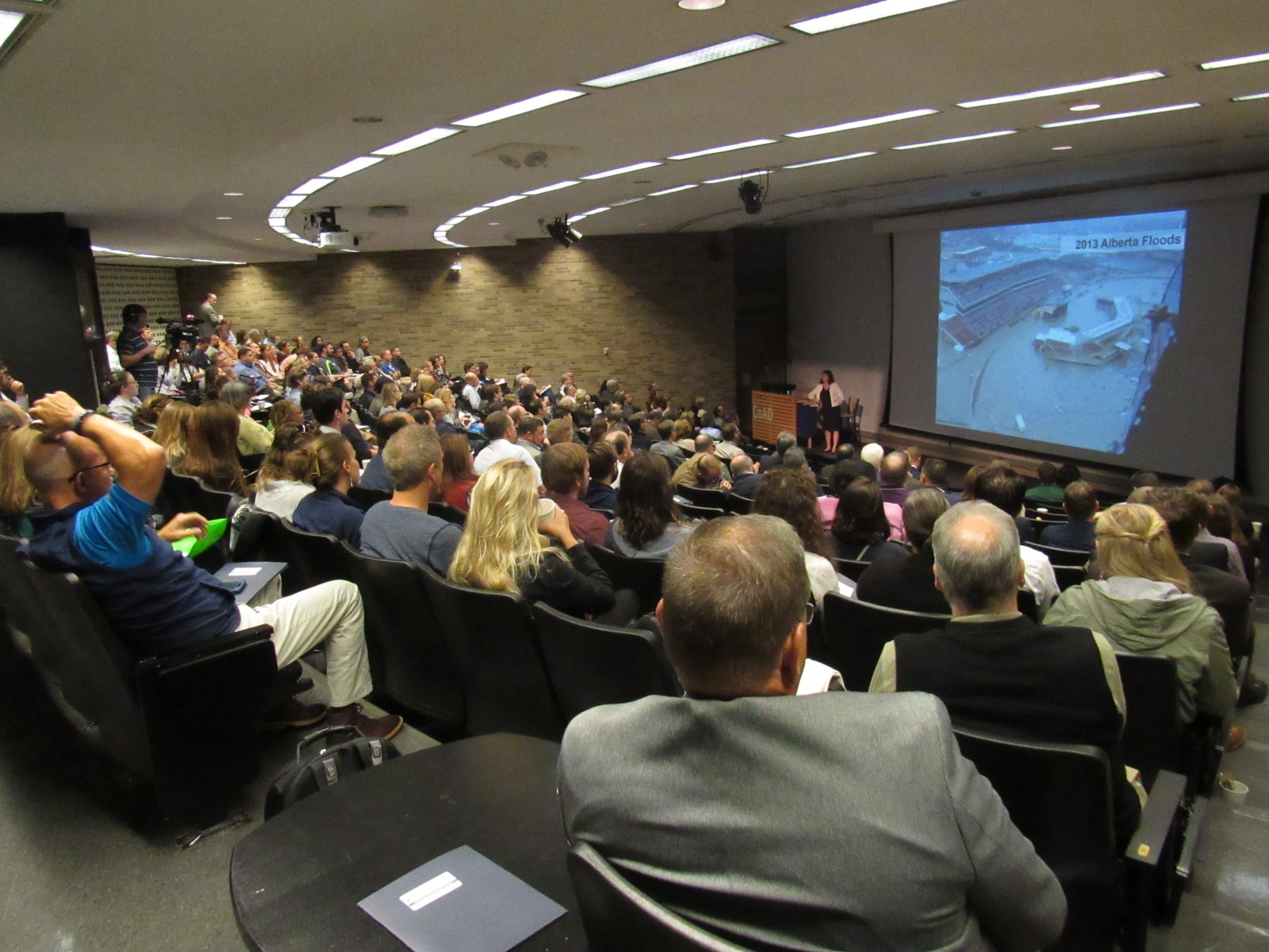 More than 250 of them gathered Friday at Lawrence Technological University for the fifth annual Regional Stormwater Summit to continue working on the answers. The event was sponsored by the Oakland County Water Resources Commissioner’s Office and the nonprofit Pure Oakland Water.

Keynote speaker Helen C. Noehammer spoke on how her employer, the city of Mississauga, Ontario, became the largest municipality in Canada to impose a stormwater runoff management fee on city water and sewer bills. Noehammer is director of transportation and infrastructure planning for the city’s Transportation and Works Department.

The “stormwater charge,” as it’s called, raised $41 million in its first year of existence, 2016 – money badly needed to maintain the city’s 1,200 miles of storm sewers, 51,000 catchbasins, and 150 miles of stormwater ditches and swales along roadways and developed areas.

Before the stormwater charge, Noehammer said, the city paid for stormwater management out of property taxes. That wasn’t very fair, she said, because commercial buildings – factories, offices, multi-family housing – create most stormwater runoff because of their large expanses of “hard surface area,” meaning parking lots and roofs.

Before the imposition of the charge, commercial land paid 31 percent of the property taxes in the city. Those properties now pay 60 percent of the stormwater charge under the city’s formula, which is based on the amount of hard surface area on a property. (That amount was determined using existing aerial surveys of buildings in Mississauga, a city of 800,000 on Lake Ontario just west of Toronto.)

There are various credit programs for commercial properties that install green technology to minimize runoff, and subsidies for places of worship, veterans’ organizations, working farms, low-income seniors and low-income persons with disabilities. Properties that drain directly into Lake Ontario are exempt, since management of the big lake is a provincial responsibility, not a city one.

Noehammer said a massive public information campaign before the charge was imposed included social media, post cards, bus shelter ads, and booths at community events. “Still, we surprised some people,” she said. The owner of an average Mississauga home pays $100 a year under the charge.

Organizers of the conference say stormwater management is a growing problem, given the increasing frequency of extreme rain events. Mississauga, for instance, has had six so-called 100-year floods in the past 13 years, Noehammer said. Overwhelmed, aging stormwater systems can turn those rain events into flooded basements and streets.

“We can’t build our way out of the problem underground, because there isn’t room, and the cost would be staggering,” Jim Nash, Oakland County Water Resources Commissioner, said at the event’s conclusion. “Green infrastructure is the way to keep that water from ever hitting the system.”

That includes green building technologies such as water-permeable pavement, and plant-based systems like green roofs and bioswales, using the earth’s natural processes to minimize runoff.

Projects discussed at the conference included ReRoot, an urban farm planned for Pontiac that will include fruit trees and berry bushes, and a wide variety of runoff mitigation techniques in the 10-year, multi-billion-dollar rebuilding of Ford Motor Co.’s engineering complex in Dearborn.