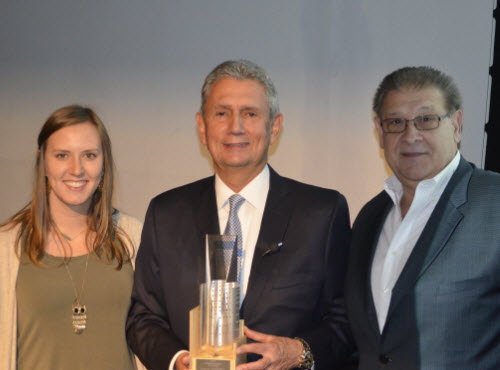 SOUTHFIELD – Technology has forever altered the practice of architecture, but architects will always need a deep human connection with their clients to make projects successful.

That was the word Thursday night from John A. Vitale, president of Royal Oak-based Stucky Vitale Architects, as he received the 2017 Distinguished Alumni Award from Lawrence Technological University’s College of Architecture and Design.

“The digital revolution has transformed architecture,” he said – noting that the ability of computers and software to create completely accurate three-dimensional models of designs, spin them around, and “fly” through them has made it far easier to communicate design concepts to clients.

However, he said, architects still should “always listen to the client. I can’t stress that enough.” And that goes beyond merely being attentive, he said – it involves a deep understanding of the ideas the client is trying to convey.

Vitale joined the firm he now leads in 1986 after working at Giffels Associates Inc. in Southfield. He became president of the firm in 1997.

Stucky Vitale has 20 employees and has been involved in numerous high-profile projects in the Great Lakes area, including the conversion of an industrial building into the headquarters of now-defunct Borders Inc., the Palladium in downtown Birmingham, the headquarters of Asset Acceptance Corp., the Pontiac domestic violence shelter HAVEN, and others. A current major project is the design of a 70-story mixed-use skyscraper in downtown Columbus, Ohio.