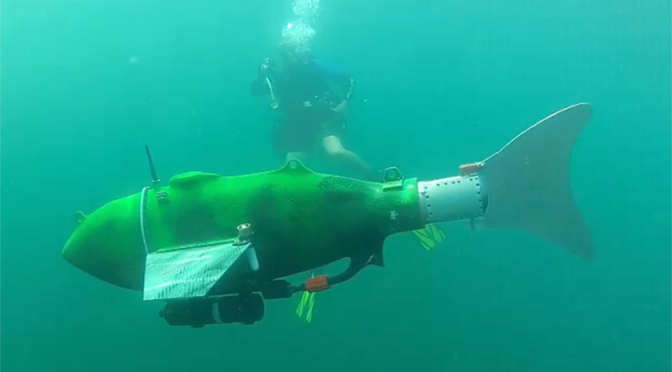 EAST LANSING — Equipped with a $750,000 grant, Michigan State University researchers hope to save more lives with more efficient underwater search-and-rescue missions through the joint efforts of humans and robots.

“There is something in the human training that we cannot yet mimic in robots,” Srivastava said. “We could send in a team of robots that can perform a search-and-rescue mission, but a human team may perform better on parts of the mission.”

“Underwater environments are vast, dangerous and often with poor visibility, so robots are ideally suited for this task,” Tan said. “On the other hand, determining and rescuing a victim require sophisticated decision-making and agile maneuvers, for which humans have a competitive edge.”

Creating more effective human-robot collaborations will also be useful in other applications, such as hazard responses, environmental monitoring, mobility of goods and humans, healthcare and manufacturing, Srivastava said.

A human operator’s accuracy and speed depends on a variety of factors that researchers call “cognitive load.” This is a measure of the efforts applied to process information for decision-making such as attention or other factors such as fatigue and boredom.

In responding to such hazard as a shipwreck, the appropriate workload or task assignment for humans can be determined after speedily evaluating data and the humans’ cognitive load, as shown in electroencephalogram, or EEG, measurements.

“When you have time-critical information, it may not be possible for robots to make an accurate decision,” said Srivastava. “So what we envision is that they collect all different kinds of information, pre-process it and send that to human operators who supervise the robots. Then, the human team looks at the evidence that the robots collected and the decisions that the robots made.”

The human team will subsequently approve the robots’ decision, or command the robots to gather more information.

Along with advances to algorithms for human-robot collaborations, the project will further develop three types of technology.
* Robotic fish will be used to collect imagery for finding victims.
* Remotely operated underwater vehicles, or ROVs, will be improved to perform human diver-assisted rescue operations.
* Overwater robotic boats will be used to help coordination between human teams and underwater robots.

While Srivastava recognizes that some people believe that “robots are out there to replace human operators and to take over jobs,” he does not believe this is the case.

“I don’t think that robots will replace humans,” he said. “I believe that robots will assist humans, they will collaborate with humans and will contribute towards increasing human efficiency.”