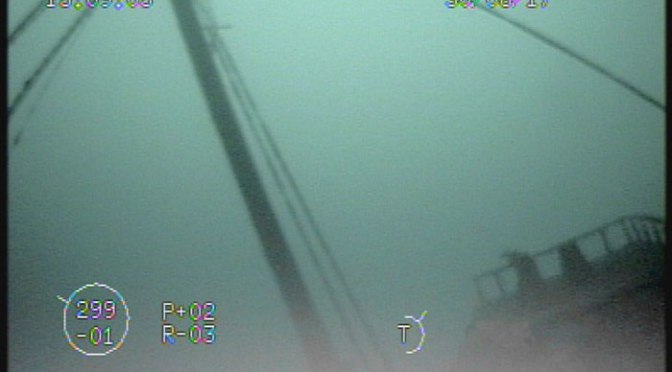 ALPENA — On May 23, researchers from NOAA’s Thunder Bay National Marine Sanctuary, NOAA’s Great Lakes Environmental Research Lab and the University of Delaware discovered two previously unknown shipwrecks nearly 300 feet below the surface of Lake Huron. Approximately 15 miles northeast of Presque Isle, these discoveries were made during an exploratory research project funded by NOAA’s Office of Ocean Exploration and Research.

Follow-up investigations carried out between June and August of 2017 included the use of an autonomous underwater vehicle (AUV) from Michigan Technological University’s Great Lakes Research Center and a remotely operated vehicle (ROV) provided and piloted by Northwestern Michigan College.

Guy Meadows, the director of the Great Lakes Research Center, joined MTU research scientists Jamey Anderson and Chris Pinnow aboard the R/V Storm to operate the IVER3 AUV, which uses an advanced sonar system, the EdgeTech 2205.

“Our portion of the mission was to use Michigan Tech’s fully AUV to fly close to these very deep shipwrecks and obtain sonar images of the precise dimensions and details to aid archaeologists in identifying the lost ships,” Meadows said. “Our IVER3 performed beyond our expectations and acquired spectacular sonar images of each wreck.”

Based on the preliminary results from these investigations, researchers believe the two sites are those of wooden bulk carrier Ohio and steel-hulled straight back steamer Choctaw. Both are historically significant archaeological sites. An early version of what later became the most iconic Great Lakes vessel, the wooden bulk carrier Ohio represented some of the earliest design attempts emerging in the Great Lakes following the introduction of steam propulsion as an alternative to sail power. Choctaw was also an innovation in ship construction, derivative of the famous ‘whaleback’ Great Lakes vessel type.

Though the preliminary results from this survey were informative regarding the potential identity of each vessel, research at both sites will continue. Ongoing review of historical records and future archaeological investigations will undoubtedly bring to light details that generate more questions and opportunities for inquiry, research, and understanding of these historic shipwrecks. Likewise, continued gathering of information will assist archaeologists in future management of these archaeological sites as part of the system of submerged cultural resources encompassed within the Thunder Bay National Marine Sanctuary.

Loss of the Ohio

In September, 1894, the wooden bulk carrier Ohio departed Duluth, Minn. for Ogdensburg, N.Y., loaded with a cargo of grain — a transit requiring it to cross Lake Superior, pass through the Soo Locks, then traverse Lake Huron, past Presque Isle and Thunder Bay. Along this route, Ohio encountered heavy weather and busy shipping lanes, a dangerous, yet all too common, combination. Meanwhile, two schooners, Ironton and Moonlight, were being towed by steamer Kershaw in a system known as “consort” where a tug or steamer pulled one or more schooners to increase the cargo carrying capacity of a small fleet. The three ships were heading north when they encountered the Ohio in rough weather, 10 miles north of Presque Isle. It was during this critical moment, with the vessels about to pass in the shipping lane, that Ironton’s towline parted. The schooner veered off course and collided with the Ohio. Both vessels sank in half an hour. Sixteen crew members of the Ohio got into lifeboats and were later picked up by schooner Moonlight. The first mate was picked up by Kershaw after clinging to a floating ladder for nearly two hours. The steamer Hepard picked up two of Ironton’s crew while five of them, including Captain Peter Girard, perished in the accident on Sept. 26, 1894.

A starboard-side profile of wooden bulk carrier Ohio. Here, early bulk carrier design is show via the small, forward pilot house, cargo holds midships with masts in place, followed by stern cabins and steam propulsion machinery. Many of these features were observed during AUV and ROV investigations, including the three masts, the pilot house along the bow, and a very similar shaped rudder and stern. Image courtesy of the Great Lakes Maritime Collection, Alpena County George N. Fletcher Public Library.

The Ohio was an early version of the wooden bulk freighter, built in 1873 by J. F. Squires of Huron, Ohio. It measured 202 feet in length, 35 feet in beam, and registered 1,101 gross tons. By this part of the 19th Century, bulk freighters represented industrialization of the maritime trades where large ships carried bulk commodities at lower cost. Owned by C. W. Elphicke of Chicago, the Ohio carried 1,000 tons of flour, equal to 10,000 barrels, when lost. The wooden schooner barge Ironton was built by George Notter at Buffalo in 1873. The Ironton was 191 feet in length with a 35-foot beam, and registered 785 gross tons. The Ironton has not yet been found and was not located during the 2017 exploratory survey efforts.

Search for the Choctaw

At the close of the Civil War, iron and steel ships began to dominate the shipbuilding trade, ultimately replacing the traditional wooden hulls of America’s merchant fleets. The ship building city of Cleveland, Ohio, with abundant coal, iron, and capital, naturally turned to steel and the innovative vessel designs it made possible. Soon, shipyards were producing larger and more efficient cargo carriers. The straight back or “monitor” design, a direct descendent of the iconic whaleback design, appeared in 1892. This design,  produced by the Cleveland Ship Building Co., had a conventional bow, but the ship’s metal sides slanted outward from the main deck to the waterline at almost a 45-degree angle. The hull resembled later submarines. All cabins were located at the stern, and the smoke stack was straight up and down. The “monitor” never fully developed as a ship class and only three were built: the Andaste, the Choctaw and the Yuma. The Choctaw was 267 feet in length, with a beam of 38 feet and an 18-foot depth of hold. The ship registered 1,573 gross tons, with a capacity of 3,050 tons. It was powered by a 900-horsepower triple expansion engine and two Scotch boilers.

A port-side view of Choctaw traveling light with much of its hull out of the water. Here, several features observed during the ROV missions in August, 2017, were corroborated. These include the stern cabin layout; locations of windows and doors; locations of bits, capstans, and davit arms; the location of the funnel and funnel cape; and the hatches moving forward of the stern cabin. Image courtesy of the Great Lakes Maritime Collection, Alpena County George N. Fletcher Public Library.

Like many Great Lakes ships, the Choctaw was not immune to mishaps. In April 1893, an engine explosion killed two crew  members. The vessel sank at Sault Ste. Marie in a collision with the steamer Waldo in May, 1896. A few years later, in May, 1900, Choctaw grounded near Point au Pins, and in April, 1902 Choctaw struck a rock at Marquette and partly sank after getting inside the harbor.

The ship’s fatal blow came on July 12, 1915 off Presque Isle. Up-bound in a dense fog with a cargo of coal, Choctaw was hit between No. 1 and No. 2 hatches by the Canadian Steamship Co. freighter Wahcondah. The ship sank in seven minutes in 300 feet of water. Captain Charles A. Fox and his crew of 21 men were rescued and taken aboard the Wahcondah.

The Choctaw remained elusive for many years; the search for the rare Great Lakes vessel type started in 2008.

As part of a NOAA grant awarded to the Friends of the Thunder Bay National Marine Sanctuary, researchers from the University of Delaware, NOAA’s Great Lakes Environmental Research Lab, and NOAA’s Thunder Bay National Marine Sanctuary conducted a large-scale exploratory survey project near Presque Isle. Expanding upon sanctuary-led surveys that occurred in 2008 and 2011, the team covered 94 square miles of unexplored lake bottom using an EdgeTech 6205 phase measuring echosounder with combined bathymetry and side-scan sonar imagery. During the course of this field campaign, the team located two acoustic anomalies which appeared to be undiscovered shipwrecks; at the time they were designated “Target 1” and “Target 2.”

Art Trembanis’s team from the University of Delaware cataloged each site with their sonar instrumentation and in June the NOAA-led team returned with Meadows, Anderson and Pinnow from Michigan Tech. Using the IVER3 AUV, the team surveyed each target in much greater detail. At “Target 1,” the apparent remains of a wooden bulk carrier, which historical records indicated was most likely Ohio, were visualized to show its pilot house, cargo hatches, stern structure, masts and rigging, and a debris field.

Despite the abundance of details revealed at “Target 1,” the other shipwreck target proved difficult to characterize. As continued AUV surveys revealed, the vessel was upside down and partially buried in the lake floor. As a result, additional underwater data was needed. To this end, the sanctuary partnered with Northwestern Michigan College to use their ROV for further site investigation. In particular, information was needed from underneath “Target 2” where the sonar could not scan. This was the area where diagnostic features would be observed.

On the same day that the remains of Ohio were discovered, researchers also located the remains of what appeared to be straight back steamer Choctaw. Follow-up investigations of both sites took place from June to August, 2017. Image courtesy of the University of Delaware.

Visiting “Target 2” first, the video recordings from the ROV mission were stunning. The vessel’s telltale straight back, or modified whaleback, design was evident. Dozens of features indicated in the builder’s plans were visible. The stern deck cabins, machinery, and tackle identically matched the historical records — engineering plans and photographs included. For the first time in over a century, the remains of the Choctaw were finally seen by human eyes.

Although these new shipwrecks are tentatively identified as the Ohio and the Choctaw, additional research is needed to complete their stories. At least one major question looms: where are the remains of schooner barge Ironton that tragically collided with Ohio? Historical accounts recorded them sinking quickly, which implies their remains would be close to one another. Yet, the survey conducted this summer revealed no such associated remains within the vicinity of Ohio’s final resting place. Only continued exploration will tell.