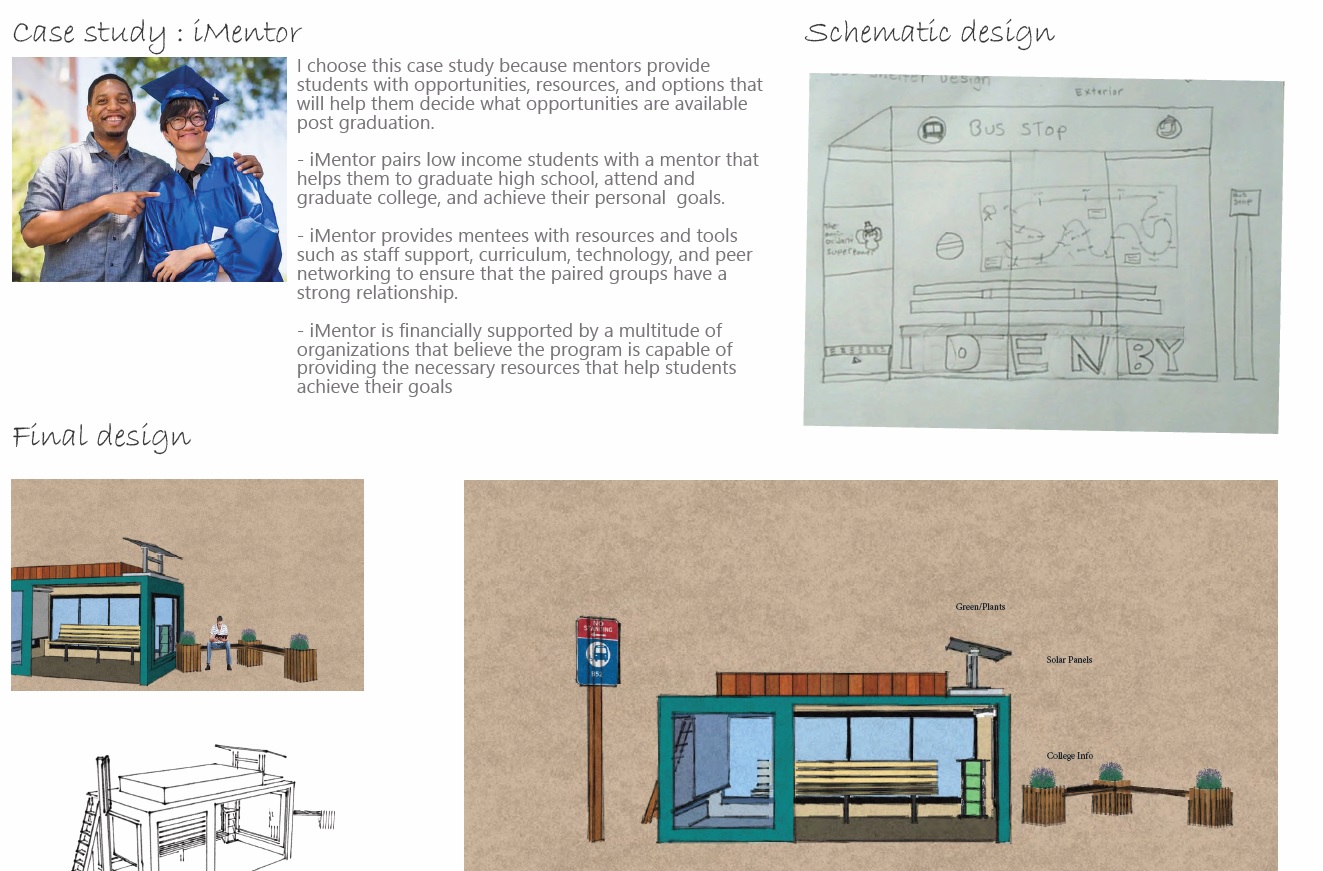 DETROIT – A high school class in architecture, taught in the spring 2016 semester by Lawrence Technological University staff, has produced at least one budding architect, as well as a whole bunch of good ideas on building a better bus shelter.

The class was taught by Meaghan Markiewicz, MAr’17, MoUD’17, who is now working as STEM program associate at LTU’s Marburger STEM Center, the clearinghouse for the university’s K-12 science, technology, engineering, mathematics and design education outreach efforts. The class was housed at LTU’s Detroit Center for Design + Technology (DCDT), 4219 Woodward Ave. in Midtown.

In the class, students from Denby High School were asked to choose a vexing social issue in their neighborhood on Detroit’s east side. Students chose everything from homelessness to lack of educational achievement to gang violence to teen pregnancy. Then, the students researched the social issue, including digging up national and local data on the problem. Finally, they were asked to design a bus shelter that would contribute to solving the problem.

Along the way, the students also learned about the basics of architecture – how to calculate scales and square footage, how to prepare floor plans and elevations, and the basics of construction materials.

The students then created posters about the problem they chose to tackle, using their research on the issue and their architectural design, learning architectural and graphic design software along the way.

Finally, they each gave a presentation on their poster to industry experts.

LTU also brought in guest speakers to talk about architecture and design, including Andrea Rosefield, founder and CEO of Embrace Creatives, a website designed to connect artists and creative professionals; Rebecca Marshburn, MoUD’16, who is a content manager for the Petify and Airbnb websites; and Christopher Stefani, associate director of the DCDT, who developed the curriculum for the course. Stefani said the course “was created to engage the students in an architectural context to employ skills of critical thinking and address issues of blight and vacant land present in the Denby neighborhood from a local youth perspective.”

The effort produced at least one future architect, Eric Smith, who graduated in June and will attend LTU this fall, majoring in architecture. He said he had never considered architecture as a career, but after a few classes, “I began to see the value of architecture, because you get to design structures that people really need in their everyday lives, and if I’m an architect or an urban planner I can help my community and make it better.”

Smith added: “My favorite part about the class was being able to design something myself, having the freedom to design a bus shelter that would benefit people.” Smith said he’s “extremely excited” to begin classes at LTU this fall. “I’m ready to increase my knowledge and be around like-minded individuals,” he said.

Markiewicz, for her part, said that “the progress of the students throughout the semester was incredible. Many students did not believe they would be able to complete a final project but pushed through coming early, staying late, and even staying after school to make sure they presented a design they were proud of. These students tackled issues that some designers are not even talking about. In combination with their research and personal experiences, they produced impressive final presentations.”

An LTU adjunct professor who was also involved in the effort, Tiffany D. Brown, added: “Working with this group of kids was tough at first. But over time, Meaghan and I were able to form relationships with many of them and teach them about being a voice in their community, and to think about how architecture and design shapes their lives. I remember being a student at what was considered a failing Detroit Public School, and someone from LTU came to an assembly to talk about architecture. If I can reach at least one person in the room like that recruiter was able to do for me, I consider my mission accomplished. I truly enjoyed being part of this program.”