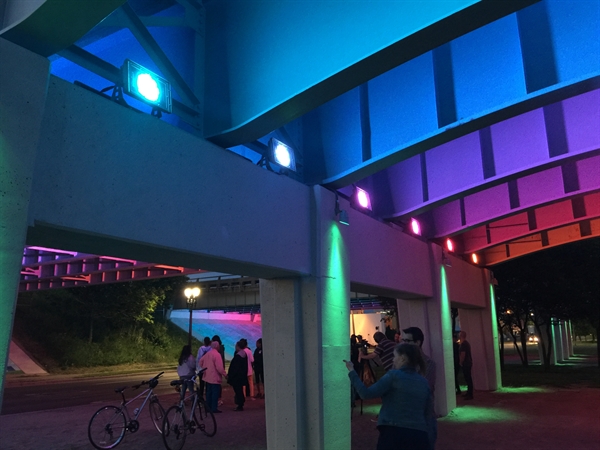 LANSING – The Lansing community gathered Tuesday evening for the official unveiling of the decorative LED lighting underneath the US-127 bridge overpass along the Michigan Avenue corridor.

The lights, which illuminate the bridge in dozens of optional color variations, brings another phase of the crowd-funded Under the Bridge Project to life.

Dick Peffley, general manager of the Lansing Board of Water and Light, said BWL officials “know the community has been eagerly awaiting the lighting of the Michigan Avenue underpass. With the new lights and murals, the corridor will become more welcoming to pedestrians, bicyclists, and motorists.”

In addition, Lansing-based artist Brian Whitfield and his team are fully immersed in the final phase of the project, the creation of four murals on the paved slopes underneath the bridge.

“We’ve been hard at work on the murals under the bridge and they are really coming together nicely,” Whitefield said. “There has been a lot of interest from passing motorists, bicyclists, and people on foot. People seem genuinely excited about what they are seeing.”

Added Bob Tresize, president and CEO of the Lansing Economic Area Partnership: “Under the Bridge is moving forward rapidly and is a visually striking example of placemaking at its best. The Michigan Avenue corridor is pulsing with economic development projects, and the space under the bridge is becoming vibrant and active as part of this. The atmosphere is changing, and the transformation is becoming palpable.”

Video and photos of the illuminated bridge can be found on the LEAP website.