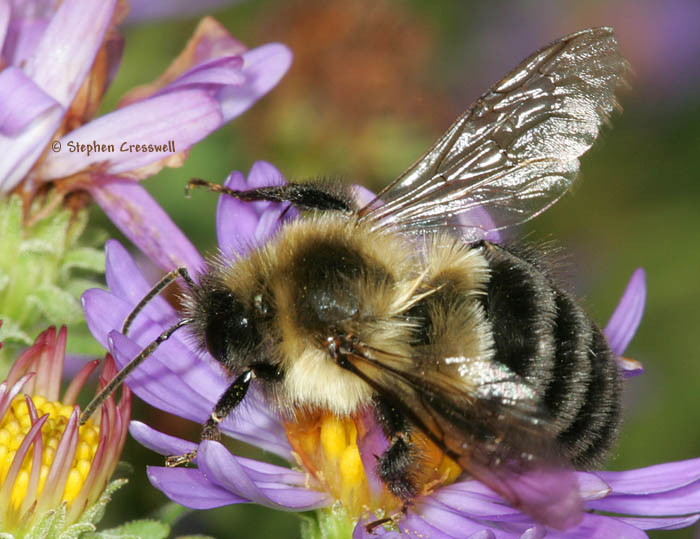 ANN ARBOR — A new study of native bumblebee populations in southeastern Michigan cities found, surprisingly, that Detroit has more of the large-bodied bees than some surrounding, less urbanized locations.

The University of Michigan students who conducted the study suspect that the large amount of vacant or idle land in Detroit may boost the bumblebee population by providing nesting sites and flowers for food.

Bumbleebees belong to the bee genus Bombus. In the study, more than 500 individuals from 10 species were identified at 30 sites in southeast Michigan.

“Sites within Detroit had higher Bombus abundance and diversity, despite their location in the densest urban landscape,” according to the authors — four UM graduate students and one undergraduate — of a study published online May 17 in the journal Royal Society Open Science. “Overall, these results have important implications for conservation of native bee populations and pollination services.”

To help clarify the role of urbanization, the UM researchers sampled bumblebees at nature reserves and urban farms and gardens in several southeast Michigan cities — Dexter, Ann Arbor, Ypsilanti, Dearborn and Detroit — with varying degrees of urban development. Each city has a dense urban core surrounded by suburban development.

Bumblebees need to nest in less-disturbed areas with bare ground, tall grass or abandoned tree stumps, making them a good candidate for testing the effects of urban land development. Handheld nets and insect traps were used to capture the bees.

The researchers used geographical information systems data to develop profiles of the land cover types surrounding each of the 30 study sites. As a proxy for urban development, they used the amount of impervious surfaces — buildings, concrete parking structures, asphalt roads —  blanketing the ground.

They found that increased urbanization, as measured by the proportion of impervious surface area, was tied to decreases in both the abundance and diversity of bumblebees sampled at sites outside Detroit.

But that pattern did not hold in Detroit. There, high urbanization seemed to be correlated with increased bumblebee abundance when compared to less urbanized sites, a finding the authors describe as “an initially unintuitive trend.”

One possible explanation is that the thousands of vacant residential properties in Detroit help sustain bumblebee colonies, according to the authors. Vacant lots are often less frequently mowed and less likely to be treated with pesticides and herbicides. Therefore, these lots can provide various flowering plants and nesting sites for bees.

The most abundant bumblebee species sampled during the study was the common eastern bumblebee (72.1 percent), followed by the brown-belted bumblebee (11.4 percent) and the two-spotted bumblebee (9.6 percent).

Another unexpected study finding was that urbanization seems to affect female and male bumblebees differently. Those distinct and previously unidentified effects seem to stem from behavioral differences between sexes.

Bumblebee colonies consist of one reproductive female, many female workers that forage for nectar and pollen and bring it back to the colony, and reproductive male drones whose only role is to mate. These different roles lead to distinct movement patterns and nesting needs between the sexes.

The student researchers said their results highlight the importance of heterogeneity in urban areas and suggest that urban landscapes can be managed to support native bee conservation.

They thanked the farmers and gardeners who offered their plots for the study. “We are very grateful to everyone who participated. We could not have done this research without their support,” said first author Paul Glaum.