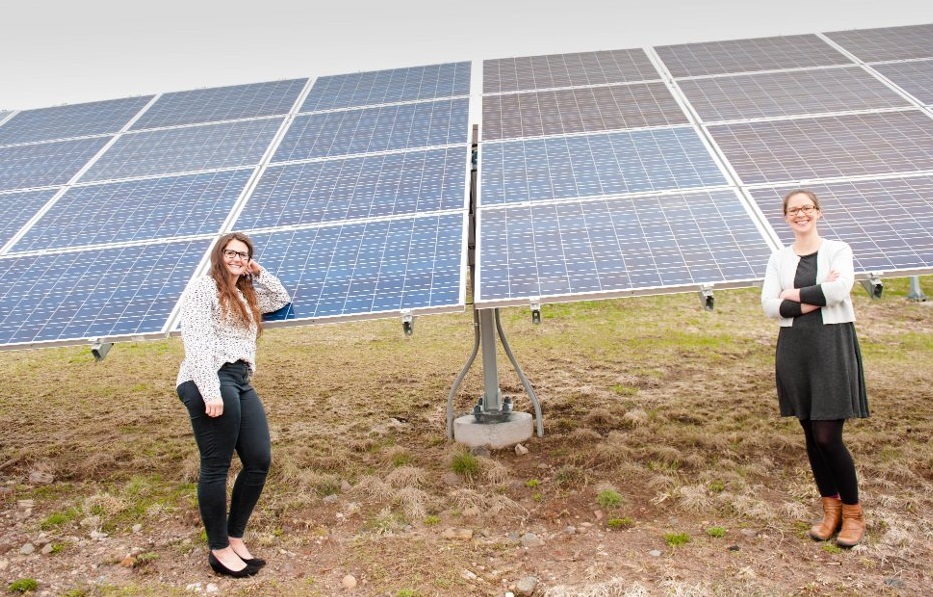 HOUGHTON — Vulnerabilities in the power grid are one of the most prevalent national security threats. The technical community has called for building up the resiliency of the grid using distributed energy and microgrids for stabilization. Power production from multiple sources increases the difficulty of triggering cascading blackouts, and following an attack or natural disaster, microgrids can provide localized energy security.

In a new paper published in the academic journal Renewable and Sustainable Energy Reviews (DOI: 10.1016/j.rser.2017.04.094), an interdisciplinary team of engineering and energy policy experts from Michigan Technological University says the first step is to outfit military infrastructure with solar photovoltaic-powered microgrid systems. Their results found that the military needs 17 gigawatts of PV to fortify domestic bases — and that the systems are technically feasible, within current contractors’ skill sets, and economically favorable.

“I come from a military-oriented family, so for me the military is important to bridge the technical capacities and policies to trickle down to other critical infrastructure and services,” said Prehoda, pictured at left above, with sociologist Chelsea Schelly. “This is such a huge issue, not only for the military but for other organizations, and it hits from all different sides, from the technical, economic and social — and it leads back to the idea of security.”

The United States military already has a renewable energy plan in place — 25 percent of energy production from renewable sources by 2025. But only 27 of the more than 400 domestic military sites either have fortified PV microgrids running now or have plans to do so, which makes the majority vulnerable to long-term power disruptions. Co-author Joshua Pearce says this is a great start but more is needed as most military backup systems rely on generators, which are also vulnerable to fuel supply disruption.

“The US military is extremely dependent on electricity now; it’s not people fighting with bayonets,” said Pearce, a professor of electrical and computer engineering as well as materials science and engineering. “If we put the money into PV-powered microgrids, it would be making us objectively more secure and we get a return on our investment as after the initial investment in PV the military would enjoy free solar electricity for the next 25 years.”

The main historical threats to the electrical grid come from natural disasters like tornados, hurricanes and winter storms, which cost between $18 billion and $33 billion every year in power outages and US infrastructure damage. The threats that keep grid security experts up at night are deliberate attacks on the grid. These can either be physical attacks — like the 2013 sniper attack on a Silicon Valley substation, which cost $100 million and lasted 27 days — or computer hacking that causes cascading disruptions like in the Ukraine blackouts in 2016. In 2012, the US Department of Defense reported about 200 cyber incidents across critical infrastructure systems and nearly half targeted the electrical grid.

During any event, energy generation and distribution unhitch like a lost caboose on a runaway train. Microgrids provide flexibility and enable generation to persist even if distribution fails, maintaining performance for critical infrastructure while decreasing the chance of cascading failures. Solar, because of its decreasing costs and geographically distributed access to long-term solar “fuel”, makes the most sense for powering microgrids.

To quantify the technical impacts of distributed energy systems, the team looked at domestic military bases and their current electric loads. Then they reviewed where the military’s existing and planned PV-powered microgrids lined up with past grid failures as well as every state’s potential for solar power.

The team found that it would take 2,140 gigawatts to supply all critical infrastructure in the US with 100 percent solar power and a hybrid microgrid system with storage provide protection against grid failure. The military alone would need 17 gigawatts. To put that in perspective, the US has installed a total capacity of 22.7 gigawatts of solar to date.

The team then looked at the technical and economic feasibility of employing the top 20 contractors already working with the US Department of Defense to install more microgrids and performed a detailed case study of three companies, Lockheed Martin, Bechtel and General Electric, to gauge the extent of the technical skills and resources available.

Given the results, the challenge to meet grid resiliency with microgrid deployment is feasible because the resources to install these systems already exist domestically.

Prehoda also worked with her PhD adviser Chelsea Schelly, an associate professor of sociology at Michigan Tech, to assess policy needs. Despite the substantial national security risk, policy that addresses electrical grid failures has been minimal. Schelly explains that support for PV makes sense in terms of national security.
Engineer Joshua Pearce says solar, because of its decreasing costs, geographic accessibility and versatility, makes the most sense for powering microgrids.

Engineer Joshua Pearce said solar, because of its decreasing costs, geographic accessibility and versatility, makes the most sense for powering microgrids.

“There is some policy recognition that energy can be a security priority,” Schelly said, adding that while the US does not have a national renewable energy policy, the military does, and it has the capacity for implementation through existing contractors. “If we recognize that this capacity already exists, then we can start thinking about PV as a security measure by integrating microgrids — and then creating local resilience based on military technologies.”

In the paper, the team examined how securing top-priority military microgrids could trickle down into different levels of critical infrastructure. Technology designed and implemented at military bases could lead to similar microgrids for other government facilities, critical infrastructure like hospitals, industry and commercial systems as well as homes and neighborhoods.

“For me, starting with the military is important for national security and grid vulnerabilities,” Prehoda said. “But it also jumpstarts technology.”

The first step is recognizing what it takes to outfit domestic military bases — and eventually military sites abroad — to combat power grid failure from natural disasters and terrorist attacks.