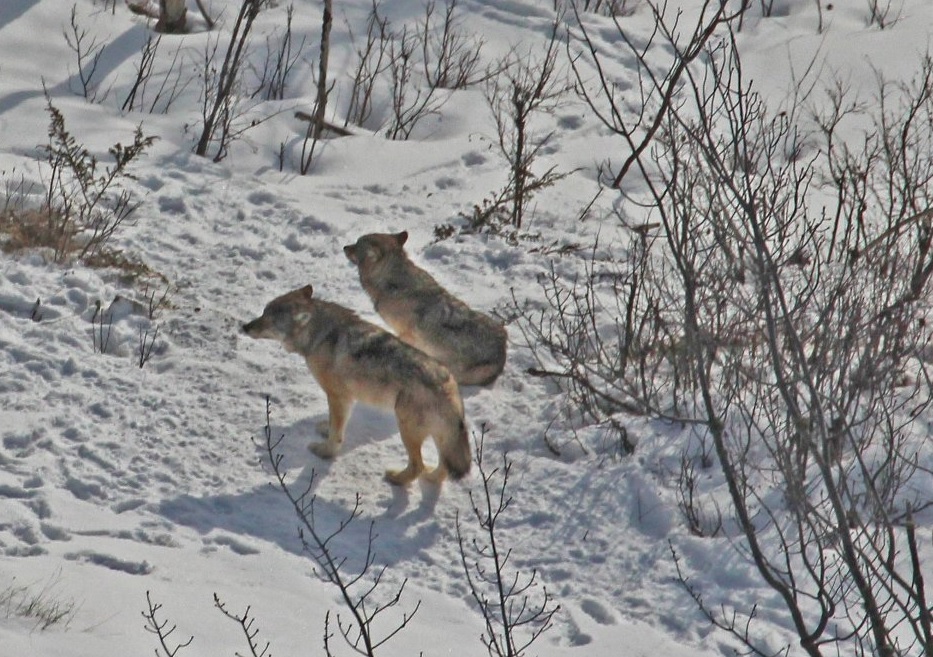 For the second year in a row, the Isle Royale wolf population remains a mere two. Researchers from Michigan Tech say that as the wolf population stays stagnant, the moose population will continue to grow at a rapid pace. And this could have a significant impact on the island’s famed forests.

According to Rolf Peterson, a research professor at Michigan Tech and co-author of the report, the Isle Royale wolves are no longer serving their ecological function as the island’s apex predator — the creature at the top of the food chain. With only two wolves left on the island, the moose population has grown to an estimated 1,600.

Without wolf predation, says John Vucetich, a professor of ecology at Michigan Tech and report co-author, the moose population could double over the next three to four years. And more moose means more vegetation is eaten. The observations were reported in this year’s Winter Study, which marks the 59th year of monitoring wolves and moose on Isle Royale, the longest running predator-prey study in the world.

Where have all the island wolves gone? The answer lies in genetics. The population crash on Isle Royale is the result of inbreeding — the remaining wolves are not only father and daughter, they are also half siblings who share the same mother.

Researchers believe the two have probably mated at least once in the past: in 2015, an approximately nine-month-old pup was spotted with the two adults. That pup, however, did not appear healthy. Researchers noted a visibly deformed tail, small stature and possibly abnormal posture. Peterson and Vucetich were not surprised when the pup failed to appear with the adults in 2016.

The remaining wolves are not expected to successfully reproduce in the future, either. Both animals are approaching old age — the female is seven years old and the male is nine — and no one can predict how much longer either wolf will live. Further complicating matters, the female wolf has been observed aggressively rejecting the male as a mate.

But even if the pair were to produce a healthy pup, it would likely have little impact on the Isle Royale ecosystem. In the case of these wolves, extreme inbreeding makes the population’s natural recovery unlikely. The wolves’ numbers started plummeting in 2009, declining by 88 percent from 24 to 2 wolves. Vucetich and Peterson believe this is a result of inbreeding, and all geneticists who have studied the situation agree that recovery is unlikely without new genetic material.

At the end of 2016, the National Park Service published a Draft Environmental Impact Statement (DEIS) to determine how best to manage the wolves on Isle Royale. The DEIS discussed four potential courses of action. According to the document, NPS would prefer a time-limited introduction of new wolves — up to 20 to 30 wolves selected to maximize both genetic diversity and restore predation to the ecosystem. NPS estimates that the process to introduce the number of wolves identified in the plan would take between three to five years. Public review of the document concluded in mid-March, and the NPS is reviewing all comments. A final decision is expected in the fall.

The 2017 moose census puts the Isle Royale herd at approximately 1,600 members. According to the report, the multiyear trend shows the moose population has been growing at a six-year average rate of 21.6 percent. Peterson and Vucetich credit this rapid growth to several factors: high reproduction rates, low rates of mortality from wolf predation, mild winters, and an abundance of forage.

But this abundance of forage may not last. According to recent findings, under the island’s current conditions, the moose population could double over the next three to four years. If this happens, the number of Isle Royale moose would reach an unprecedented high for the project’s six-decade history. And this could result in high levels of browsing on the island’s vegetation.

“Everything we’re seeing on Isle Royale is consistent with our past understanding of the ecosystem’s dynamics,” Vucetich said. “We have every reason to expect the moose population will continue to grow and increasingly impact the forest.”

Moose aren’t the only Isle Royale residents experiencing a population boom with a dwindling number of wolves. The report notes that the number of beaver colonies has increased dramatically over the past six years, from approximately 100 to nearly 300.

“Wolves are the only significant predator of beaver on Isle Royale,”  Peterson said. “Beaver were nearly extinct across North America 200 years ago. At Isle Royale, they’re now at unprecedented levels.”

Read the NPS Draft Environmental Impact Statement at this link.