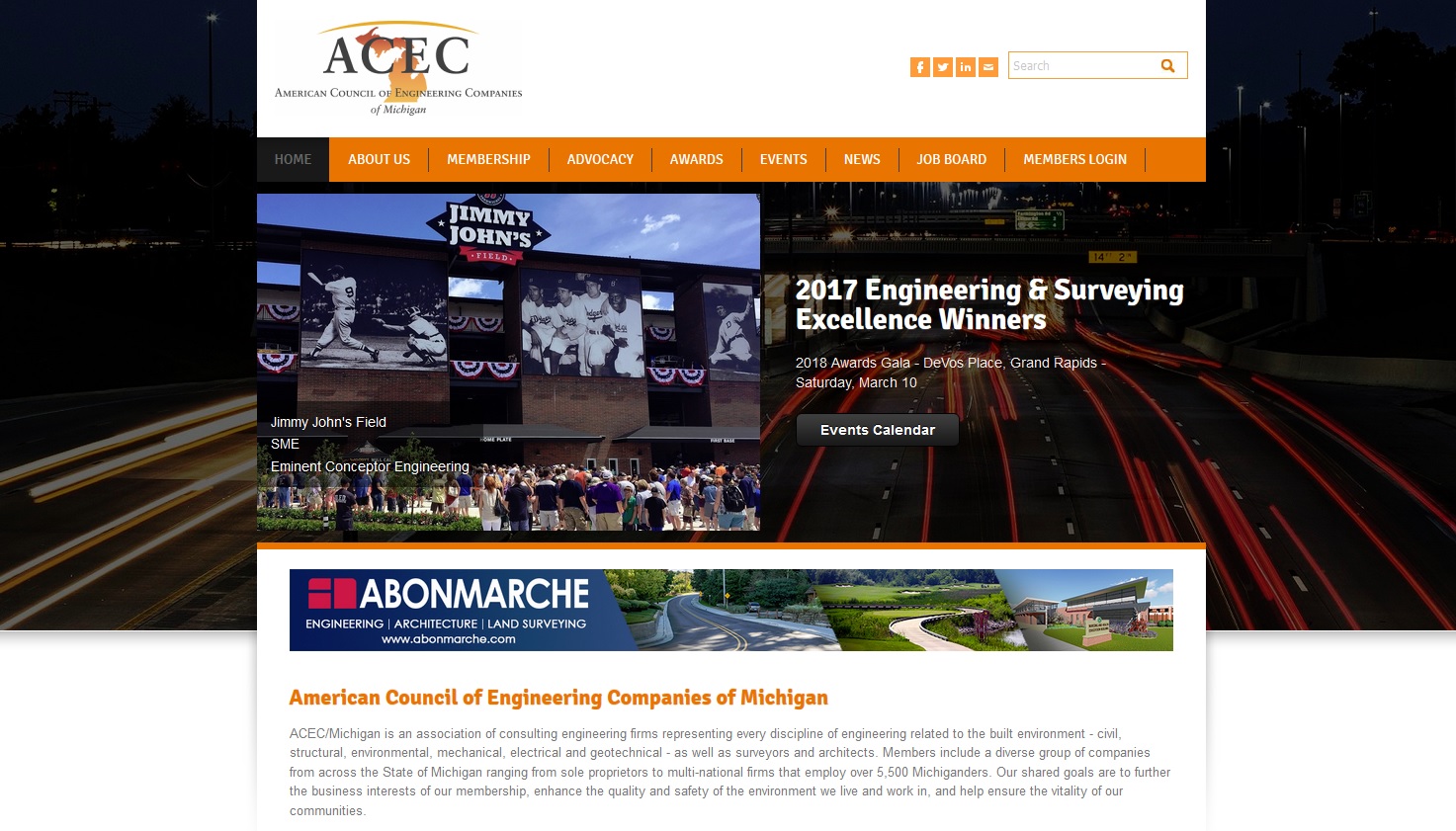 On March 11, design professionals and guests gathered at The Fillmore Detroit to recognize outstanding Michigan engineering and surveying projects from the past year, as well as engineering professionals who have significantly contributed to the profession.

“This program serves as the final celebration of Engineers Week,” said Ron Brenke, PE, ACEC/M executive director. “The projects engineered by private sector firms have a profound effect on the quality of life for all Michigan residents. Their efforts result in quality roads and bridges, safe drinking water, and a clean environment for people to live, work and play.”

This year’s most prestigious award – the Engineering Eminent Conceptor Award – went to SME (Plymouth) for the Jimmy John’s Field project in Utica. Built over a landfill, this project created numerous challenges. Working against a firm 12-month schedule to have a field ready for Opening Day 2016, SME and the entire project team worked tirelessly to secure funding, design plans that made the site suitable for development, and construct a ballpark that would not only serve as a home for the sport, but that would revitalize a community and serve families for generations to come.

Two firms were honored with a Surveying Honorable Conceptor Award:  • Fleis & VandenBrink of Grand Rapids for its work on the Muskegon River Mapping project for the West Michigan Shoreline Regional Development Commission in Muskegon.
• Surveying Solutions Inc. of Standish for its work on the Gordie Howe International Bridge Data Fusion project for the Windsor Detroit Bridge Authority in Detroit.

The Board Design Award was given to AECOM for the board designed to ‘tell the story’ of the M1-Rail project.

This year’s ACEC/M Vernon B. Spalding Leadership Award was presented to Robert C. Rabeler, PE, of SME to honor his outstanding leadership roles in ACEC and several community organizations.

The ACEC/M Felix A. Anderson Image Award was presented to Philip Sanzica, PE, the Oakland County Chief Deputy Water Resources Commissioner, for his actions and contributions to enhance the image of the profession.

The Eminent and Honorable Conceptor award winners are eligible to compete at the National ACEC engineering competition in Washington, D.C.

The American Council of Engineering Companies of Michigan has more than 100 member firms around the state, engaged in a wide range of engineering, architectural, and surveying works.