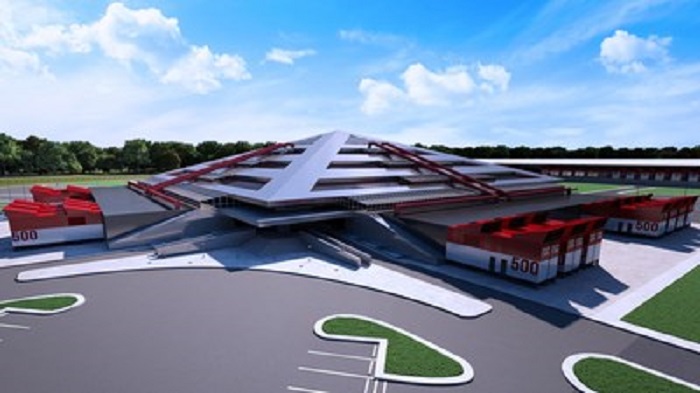 GAINES TWP. – The Las Vegas, Nev.-based data storage giant Switch said Thursday that it has opened its West Michigan campus in the iconic pyramid building that once housed the headquarters of Steelcase Inc.

The building is designed for up to 1.8 million square feet of data center space, with the first phase, now open, including 225,000 square feet. The company said the data center – which eventually may use 320 megawatts of power – will be run with 100 percent renewable energy.

Based on more than 260 patent and patent-pending claims developed by founder and CEO Rob Roy, Switch says its data centers exceed all industry standards.

During the construction over the past year, led by general contractor Christman Co., more than 700 people have been employed at the site in construction and other positions. The company said almost 99 percent of these workers are Michiganders. Switch expects that hundreds more people will be employed as the campus is built out.

With the support of officials in Gaines Township and Kent County, development and permitting has begun well ahead of schedule for the first 471,248-square-foot Switch Grand Rapids 1 data center on the property surrounding the Pyramid, the first of several data center facilities planned for construction there. The campus is expected to be in continuous expansion for at least 10 years, making it a constant source of construction work and growing employment.

The Right Place, the economic development agency for the Grand Rapids area, sees the establishment of the Switch Pyramid campus as a catalyst for the growth of the tech sector in the region.

“Switch’s investment, local employment, and community commitment have exceeded our expectations for what was possible when they first approached us about coming to West Michigan,” said Birgit Klohs, president and CEO of Right Place.

Switch said it would hold a grand opening ceremony at the pyramid later this year. Until Switch bought it last year, the building had been vacant since 2010. Steelcase built in in 1989.

Switch, founded in 2000, operates seven data centers in the Las Vegas area and seven more in the Reno, Nev. area. It is also building data centers in Italy and Thailand.