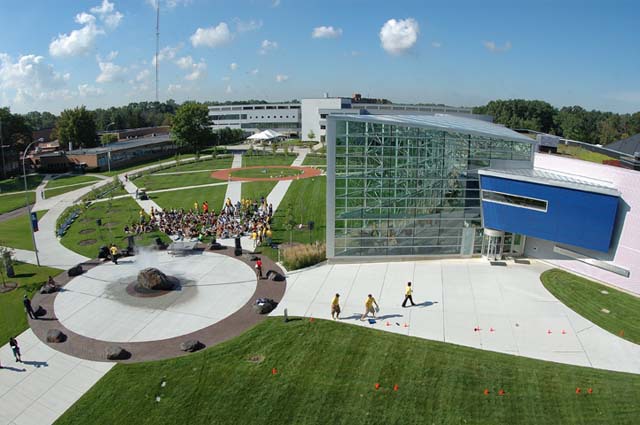 SOUTHFIELD – The Lawrence Technological University Board of Trustees approved construction of a new, 95,000-square-foot residence hall on its Southfield campus, to open in the fall of 2018.

The new residence hall will be four stories tall and include space for 300 students, along with 22 resident assistants and housing administration staff, according to Michael Guthrie, a partner at inForm Studio, the Northville architecture firm that is designing it.

“This project will continue the transformation of Lawrence Tech from a commuter-only school to a residential campus, and will offer our on-campus students the latest in amenities designed to enhance their total educational experience,” LTU President Virinder Moudgil said.

Guthrie said the project is designed to connect the two major areas of Lawrence Tech’s campus – the main academic Quadrangle to the south, where Donley Hall is located, and North Campus, home to LTU’s Ridler Field House, Reuss Hall, the Art and Design Center, the Applied Research Center, and several office buildings.

“We have two guiding principles for this project,” Guthrie said. “One is the unification of the entire campus to create a very walkable environment, and the other is to create a housing district within the campus.”

Added Joseph Veryser, LTU university architect: “It has been the university’s objective to aggregate or cluster undergrad housing in the heart of the campus to better enable entering freshmen to become part of a community and a part of campus life. The principle is one of closeness to one another and closeness to campus activity and core support areas such as food service, bookstore and library. The placement of the building is in line with LTU’s Campus Master Plan that is structured around that philosophy.”

Guthrie said the building would be designed with two four-story towers linked by a bridge on the second, third and fourth floors. The first floor of the west tower will feature “a lot of communal space,” including a fitness center, coffee shop, and a commons area. Common spaces will also be scattered throughout the building, he said, including study areas, lounges, and music practice rooms.

More about inForm and its work at www.in-formstudio.com.