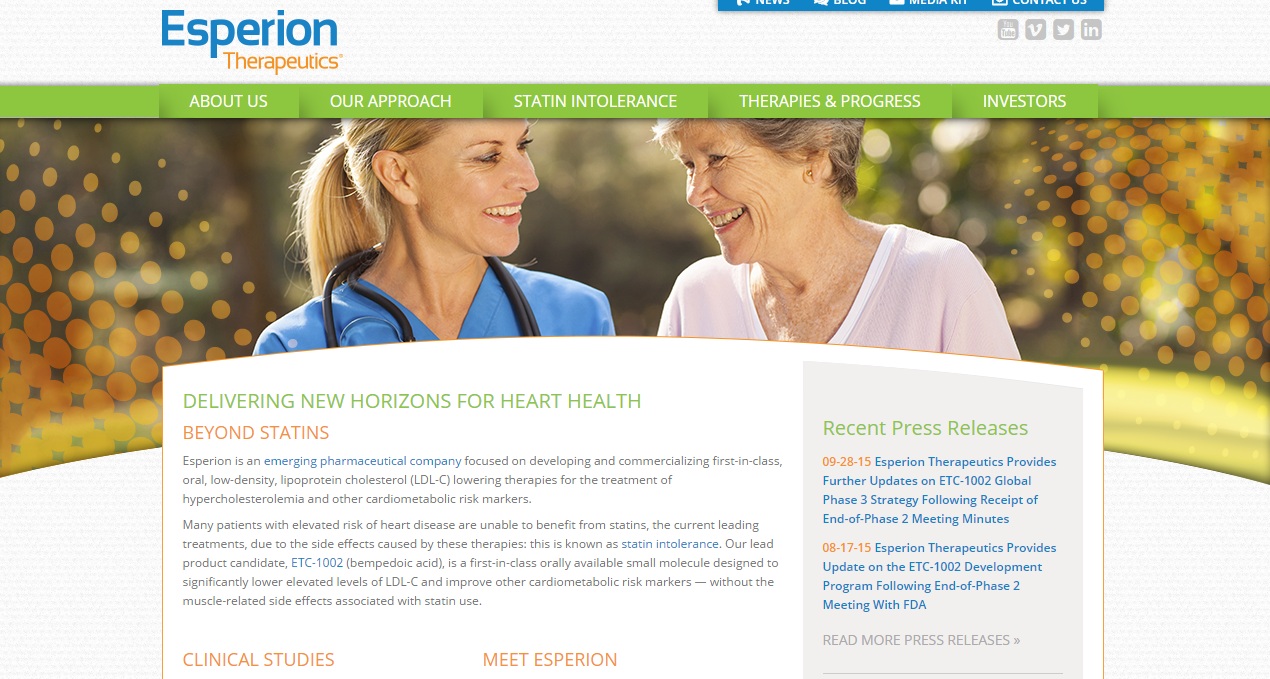 “Last year, Esperion was focused on building a strong foundation for the development and initiation of our global pivotal Phase 3 clinical development program for bempedoic acid, which the team successfully initiated,” President and CEO Tim M. Mayleben said. “Our focus in 2017 will be on the timely completion of patient enrollment of these LDL-C lowering efficacy studies to enable us to report top-line results by mid-2018. We are encouraged by the early completion of patient enrollment in our long-term safety and tolerability study in January, and remain focused on completing patient enrollment across the remaining global pivotal Phase 3 studies.”

Esperion published a paper on the mechanism of action of its drug candidate, bempedoic acid, in the journal Nature Communications in November. In December, the company started three Phase 3 clinical tudies on the drug. And in January, the company completed the patient enrollment in a global Phase 3 long-term safety and tolerability of bempedoic acid.

In March, the company is scheduled to start a Phase 2 study of combining bempedoic acid with two statin drugs, and will make a presentation at the American College of Cardiology 66th Annual Scientific Session.

Company officials said they expect to use $125 million to $135 million of its cash reserves in 2017.  The company estimated that current cash resources are sufficient to fund operations into early 2019 and through the announcement of top-line results from all global pivotal Phase 3 safety and efficacy studies.

Esperion said its drug candidate reduces cholesterol levels without some of the side effects of today’s statin drugs, including muscle weakness. The drug is also being studied in combination with statin drugs, allowing a lower dose of statins.

In the United States, 78 million people, or more than 20 percent of the population, have elevated levels of LDL, the so-called bad cholesterol. An additional 73 million people in Europe and 30 million people in Japan also live with elevated LDL. Esperion’s mission is to provide patients and physicians with convenient, cost-effective, once-daily, oral therapies to significantly reduce elevated levels of LDL-C in patients inadequately treated with current lipid-modifying therapies. It is estimated that 40 million patients in the U.S. are taking statins with approximately 5 to 20 percent of these patients only able to tolerate less than the lowest approved daily starting dose of their statin and considered “statin intolerant.”