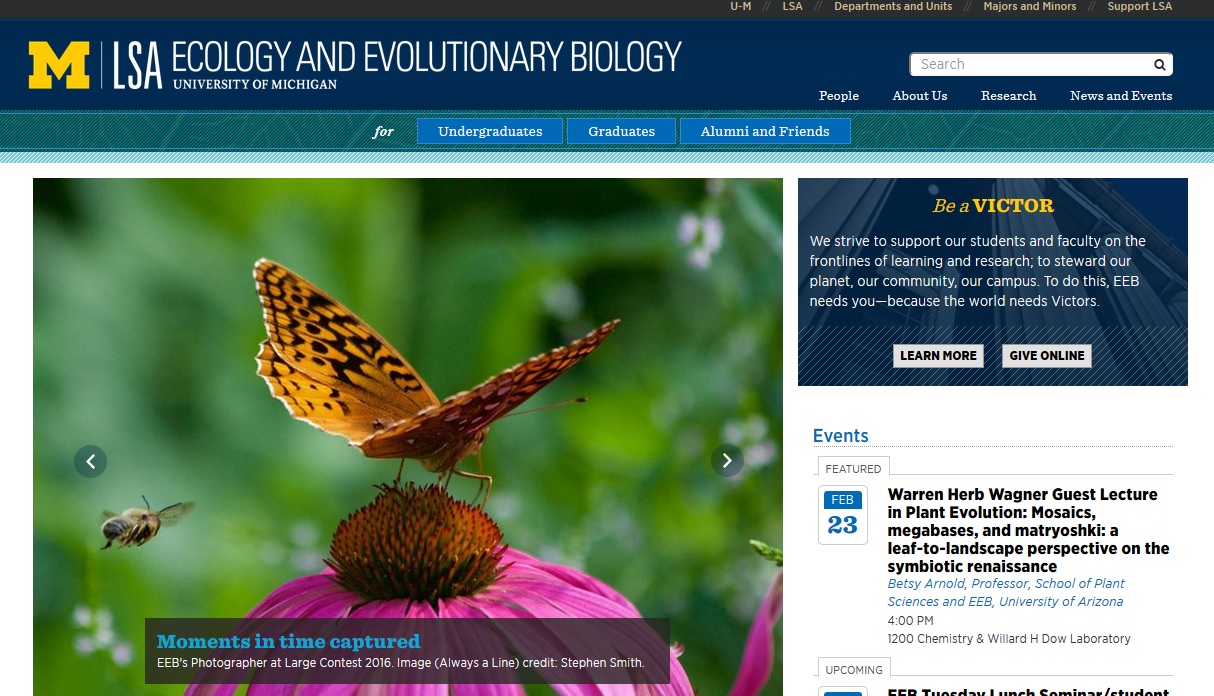 ANN ARBOR – University of Michigan ecologist Meghan Duffy is one of 15 infectious disease researchers named 2017-18 Public Engagement Fellows by the American Association for the Advancement of Science.

The fellows have demonstrated leadership and excellence in their research careers, as well as an interest in promoting meaningful dialogue between science and society, according to AAAS, the world’s largest general scientific society and publisher of the journal Science.

After the training, they will return to their institutions with resources and connections to develop and implement public engagement activities, opportunities for training other scientists in their communities, and increased capacity for public engagement leadership. AAAS staff will provide ongoing support and continuing professional development throughout their fellowship year.

“It’s an honor to be selected as a AAAS Public Engagement Fellow,” said Duffy, a disease ecologist and an associate professor in the UM Department of Ecology and Evolutionary Biology. “I’ve always thought that public engagement was important, but the current climate makes this work feel absolutely critical.”

Duffy’s research focuses on the ecology and evolution of infectious diseases, especially in aquatic ecosystems. She tries to understand how disease outbreaks start, why they end, and the factors that determine their severity.

“I’ve been wanting to do more science communication and public engagement work, but it’s been challenging to figure out how to do so effectively,” she said. “How does one write an engaging opinion piece? How does one go about getting it published? What are other ways to engage broad audiences? These are not topics that scientists typically receive training in, but it’s clear that we urgently need more scientists doing this sort of science communication.”

In her first faculty position, at Georgia Tech, Duffy received a faculty award for academic outreach, based in part on her work at Piedmont Park in Atlanta, where she gave presentations and led hands-on activities for elementary and middle school students.

At UM, she is involved in various diversity, equity and inclusion initiatives and is developing a unit in the Wolverine Pathways program for high school students from Detroit, Southfield and Ypsilanti. Duffy is active on various social media platforms and has written for the Dynamic Ecology blog since 2012.

“One of my goals as a public engagement fellow is to use the training I receive to develop a program here at the University of Michigan that trains academics in how to engage effectively with high school and college students from diverse backgrounds,” she said.

She received a doctorate in zoology and ecology, evolutionary biology and behavior from Michigan State University in 2006.

“The 15 fellows selected, and the many others who applied, demonstrate clear commitment from scientists and researchers within the infectious disease research community to engage the public on many critical issues,” according to AAAS.

The fellowship program, now in its second year, continues to build on the longstanding commitment of AAAS to science communication and public engagement. The first cohort of AAAS Public Engagement Fellows focused on climate change.

The American Association for the Advancement of Science publishes the journals Science, Science Translational Medicine, Science Signaling, and Science Advances, a digital, open-access journal. Science has the largest paid circulation of any peer-reviewed general-science journal in the world.

AAAS was founded in 1848 and includes nearly 250 affiliated societies and academies of science, serving 10 million individuals. The nonprofit organization is open to all and fulfills its mission to “advance science and serve society” through initiatives in science policy, international programs, science education, public engagement and more.