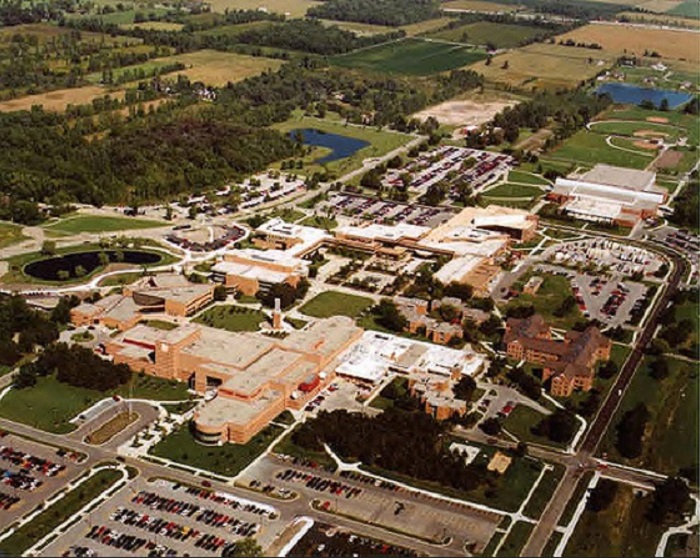 UNIVERSITY CENTER – Saginaw Valley State University will welcome nearly 5,000 high school students from across Michigan for the statewide FIRST Robotics competition Wednesday, April 12 through Saturday, April 15. Including professional mentors and family members, an estimated 7,500 people will descend on the Great Lakes Bay Region for the competition, which is designed to inspire students to pursue careers in the STEM fields: science, technology, engineering and mathematics.

“We are dedicated to growing the next generation of passionate STEM individuals,” said Gail Alpert, president of FIRST in Michigan. “The robot is the vehicle we use to help them understand fields from mechanical engineering to computer science to business.”

“We have highly determined students and faculty throughout our STEM disciplines, and they are winning national awards year after year,” he said. “This provides our students and faculty with an opportunity to volunteer for the event and support these high school students. It also allows us to introduce our academic programs to a motivated group of young people, including our specialized research and competitive opportunities that have received millions of dollars in private support over the past few years.”

The competition will feature 160 high school teams, which average 30 students and four professional mentors per team. Practice sessions and robot repairs will take place in SVSU’s field house, while competition events will be held in O’Neill Arena of the Ryder Center. Both facilities are part of SVSU’s athletic complex.

The Great Lakes Bay Regional Convention and Visitors Bureau, which provided assistance to allow SVSU to host the event, estimates the competition will result in direct spending of $1.2 million in the region. The event previously was held in Grand Rapids, but outgrew the facility as student participation has increased.

“SVSU presents us with more space and an absolutely beautiful facility,” Alpert said.

FIRST Robotics teams that qualify for the state finals will arrive Wednesday, April 12 for inspection. The qualifying rounds of competition will take place throughout the day Thursday, April 13 and Friday, April 14 with 40 teams in four separate divisions. A total of 32 teams will advance to the playoff rounds Saturday, April 15 with the champion crowned that afternoon.

In each round, three teams compete using autonomous and remote-controlled robots piloted by students, battling to earn points during a two-minute round.

“It’s almost like an internship, because students are partnering with industry mentors,” Alpert said. “Our students learn through hands-on experience and problem solving. You don’t get that in a lot of other high school competitions.”

Area employers such as Dow Chemical Co. and Nexteer Automotive are among the companies actively involved with FIRST Robotics, and a significant number of schools in the region field teams, including a first-year team from the Great Lakes Bay Early College at SVSU. For more information about FIRST in Michigan, visit www.firstinmichigan.org.

In the FIRST Robotics competition, remote-controlled robots, piloted by students and cheered on by thousands of screaming fans, go head-to-head in short games on the floor of a sports arena, battling it out to earn points during a two-minute round.

Saginaw Valley State University is a comprehensive university with more than 90 programs of study for its more than 9,000 students. SVSU partners with businesses, foundations and school districts in the region to improve students’ performance in math and science at the middle school, high school and university levels.