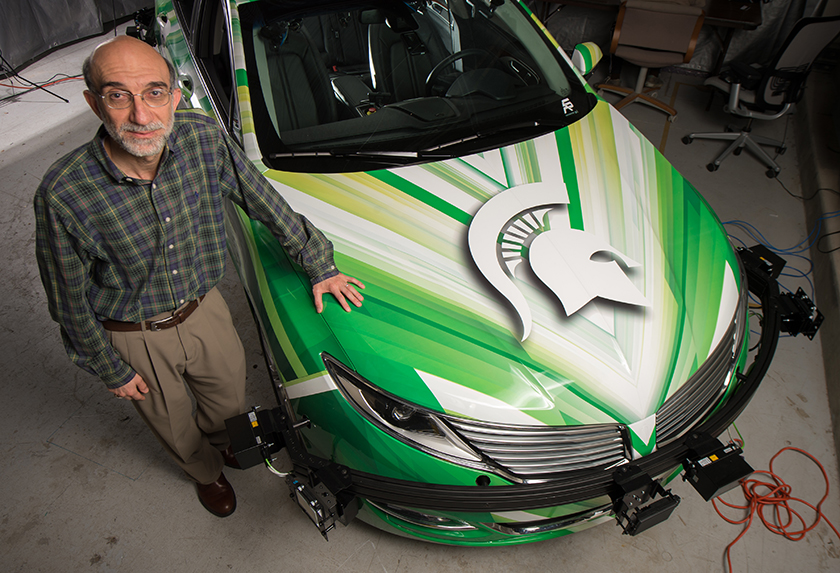 MSU’s green-and- white vehicle is equipped with a variety of intelligent devices and sensors, such as laser radars, or lidars, that create a 3D map of the driving area as well as advanced algorithms that allow a vehicle to maneuver in its environment.

“Much of our work focuses on technology that integrates the vehicle with its environment,” said Hayder Radha, pictured above. Radha is professor of electrical and computer engineering and director of MSU’s Connected and Autonomous Networked Vehicles for Active Safety (CANVAS). “In particular, MSU is a recognized leader in computer vision, radars and antenna design, high-assurance computing and related technologies, all areas that are at the core of self-driving vehicles.”

Among those who will be helping MSU display the car at AutoMobili-D in January will be Garrick Brazil, a PhD student in computer science and engineering, and Mohammed Al-Qizwini, a PhD student in electrical and computer engineering. The students, pictured below, work with Radha on the autonomous vehicle project. Brazil specializes in object detection outside the vehicle, and Al-Qizwini is an expert on the technical aspects of the vehicle.

Last year, MSU was one of only a few universities invited to participate in the World Mobility Leadership Forum, an international gathering devoted to promoting the development of autonomous or self-driving vehicles.

MSU again will be a player, displaying two vehicles including a vehicle MSU engineers have been using to test the latest in autonomous-vehicle technology. The other car is the current student-designed and built Formula SAE racecar.

MSU researchers are involved in the work that will someday make self-driving vehicles not just a reality, but commonplace. While some of this work isn’t of the glamorous variety, it is crucial to the development of self-driving cars. Scientists are focusing much of their attention on several key areas, including traditional radars; laser radars, also known as lidars; computer software; and development of artificial intelligence algorithms that allow a vehicle to maneuver in its environment.

One example: Making sure the autonomous vehicle has the ability to communicate with other vehicles and the infrastructure surrounding it. Such communications enable a car to detect other vehicles that are approaching an intersection and recognize whether the other vehicle is going to stop in time.

In addition, a connected vehicle can be used to synchronize traffic lights, so traffic can move more efficiently and reduce backups.

This is all made possible because MSU is a nationally recognized leader in much of the technology that can make this happen.

A connected vehicle, said John Verboncoeur, associate dean for research in MSU’s College of Engineering, also can be used to synchronize traffic lights, so traffic can move more efficiently and reduce backups.

“If the sensors in the car and in traffic lights are communicating,” he said, “much information can be gathered – information that can save lives and fuel and reduce greenhouse gas emissions.”

Biometrics and recognition technology research at MSU will also be an invaluable part of an autonomous vehicle. Specifically, said Verboncoeur, the technology will monitor not only the identity but also the health and well-being of a vehicle’s occupants.

“In the event of a problem, a human has to be ready to take over,” Verboncoeur said. “This technology will help understand a person’s status. Are they sleeping? Or perhaps visually impaired?”

If a vehicle occupant is unable to drive, the technology can detect that and pull the car over to the side of the road.

MSU acquired a car in 2016 that is equipped with a variety of intelligent devices and sensors including a series of radars and lidars, cameras and accompanying software that could someday be used in an autonomous vehicle.

For example, the LIDAR technology has the ability to develop a 3-D map of the area in which the car is driving for maneuverability improvement, as well as develop advanced algorithms that will assist in navigating a particular environment. On the other hand, radars can quickly detect a variety of objects that are moving or are stationary in the vicinity of the car or at longer distances under various weather conditions, including fog and snow, by using high frequency signals.

“We are testing and conducting performance analysis of state-of- the-art sensors,” Radha said. “We’re examining which ones perform the best. How good are they at detecting objects? And what are the best algorithms for recognizing these objects and for maneuvering a vehicle around them?”

Radha noted that the sensors generate huge amounts of data, so “big data analysis” is another important piece of CANVAS.

“We’re continuously collecting data and analyzing it as part of our focus. Furthermore, since MSU has a new Department of Computational Mathematics, Science and Engineering, we are well positioned to resort to leading experts to help with us advance that part of our research,” he added.

The other vehicle is student-designed and developed, and no stranger to the NAIAS.

This year’s car is also an award-winner. In September, it earned first place honors in the driver’s championship — by setting the fastest lap of the day — and second place overall during the 15th Annual University of Toronto Shootout at Mosport Kartways in Ontario.

In May, the racing team ranked No. 5 out of 120 international teams in the 2016 Formula SAE-Michigan competition at Michigan International Speedway. The Spartans were the second-highest ranked American team at MIS this year.