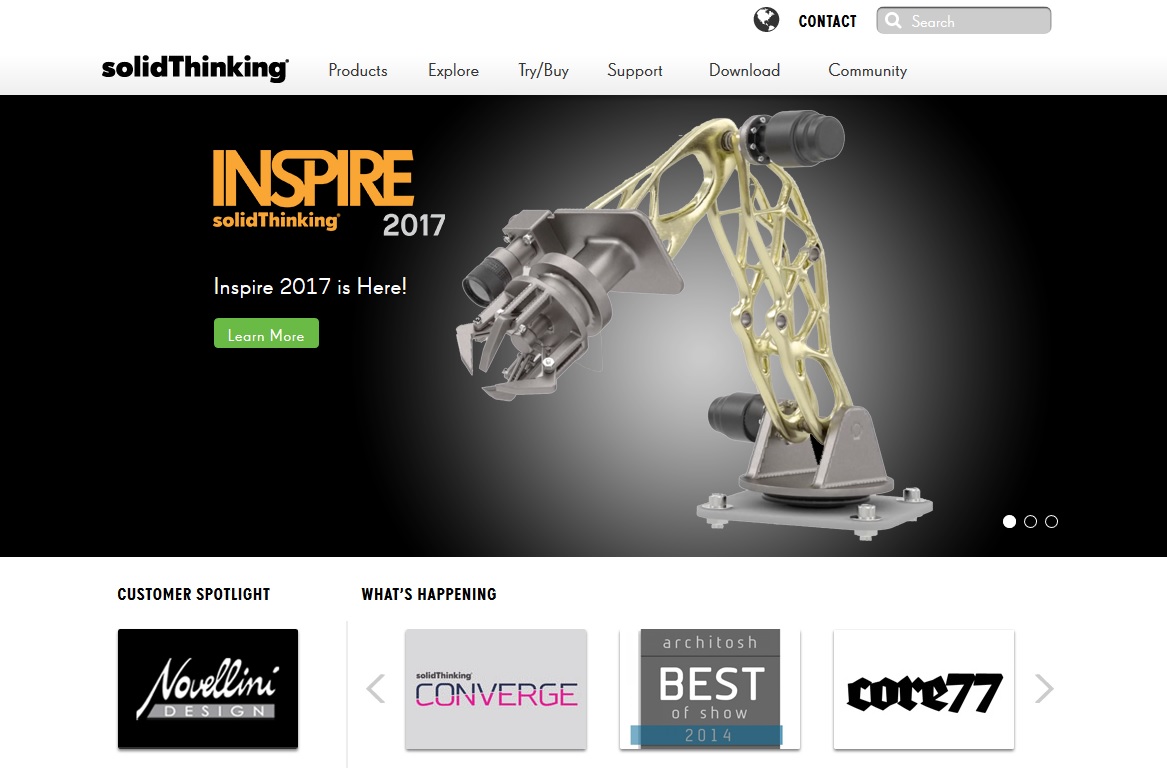 The company said the new product design software improves usability and adds  multiple new features that have been requested by customers.

“We are incredibly proud of the 2017 releases,” solidThinking president Jim Hassberger said. “Inspire was the first tool to market that focused on putting generative design in the hands of design engineers and it continues to be a world-class product. The latest release definitively positions it to be a leader for years to come. Evolve’s flexibility and combination of polygonal, solid parametric, and organic surface modeling, as well as built in rendering and construction history make it one of the fastest and most flexible design tools on the market today.”

Added solidThinking program manager Andy Bartels: “With Inspire 2017, we improved our already great generative design product Inspire, by adding motion tools that enable design engineers to investigate system motion to predict loads for moving parts. Never before has it been so easy to mechanize a model or perform a motion analysis.”

Key Updates to Inspire 2017 include:
* The new Motion tool allows users to easily mechanize their models and investigate system motion to predict loads for moving parts.
* The Topography Optimization tools can be used to change shapes of shell structures by introducing stamped bead patterns for better structural performance.
* Updated Partition Tools allow users to divide a part into design and non-design regions by selecting a hole, pocket, or face to offset.
* The Bolt Pretension tool allows users to achieve more accurate results when bolts are under pretension.

Evolve’s hybrid modeling system has been updated with a number of new enhancements and tools primarily based on customer requests. Key updates to Evolve 2017 include:
* New Planar Symmetry and Radial Symmetry tools have been added to replace the Mirror and Polar Copy tools.
* All images which are rendered inside Evolve now include a Depth Channel (tiff). This Z-depth channel can now be saved in the Image Browser and used in post-processing tools such as Adobe Photoshop to simulate the natural blurring of foreground and background scene elements when viewed through a camera lens.
* New and improved import/export for SVG, PDF 2D, DWG, and DXF formats.
* New length parameter for the Line tool and Rounded Polyline tool.
* Improved Curve Offset tool to work directly on surface edges.

Inspire 2017 and Evolve 2017 are available through more than 200 channel partners worldwide, and through Altair’s patented HyperWorks licensing model.

SolidThinking is a wholly owned subsidiary of Altair, an engineering technology provider with more than 2,600 employees, 5,000 customers, and 45 offices in 20 countries. To learn more, visit www.altair.com.