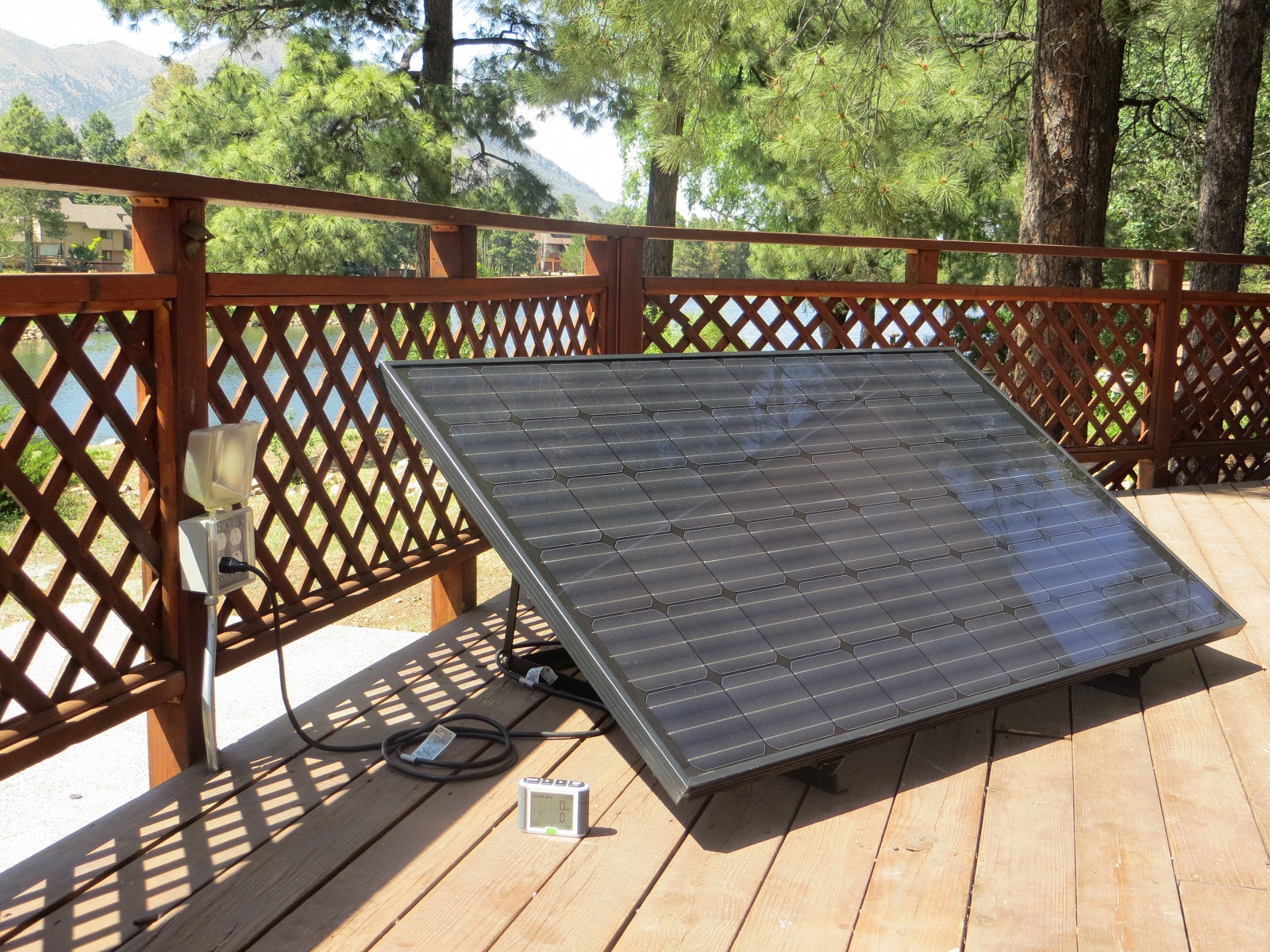 HOUGHTON — Support for solar energy is vast. According to a 2015 Gallup poll, 79 percent of Americans want the US to put more emphasis on developing solar power. Most of the same people, unfortunately, can’t afford to install solar energy systems in their homes. Even after federal tax credits, installing solar panels to cover all of a family’s electricity needs can cost tens of thousands of dollars. For others, a home solar system isn’t a consideration because they rent, or move frequently.

“Plug and play systems are affordable, easy to install, and portable,” said Pearce, an associate professor of materials science and engineering and of electrical and computer engineering. “The average American consumer can buy and install them with no training.”

In a study funded by the Conway Fellowship and published in Renewable Energy (DOI: 10.1016/j.renene.2016.11.034), Pearce and researchers Aishwarya Mundada and Emily Prehoda estimate that plug and play solar could provide 57 gigawatts of renewable energy – enough to power the cities of New York and Detroit – with potentially $14.3 to $71.7 billion in sales for retailers and $13 billion a year in cost savings for energy users.

Sounds great, right? Well, there’s one problem: in many parts of the United States, electrical regulations don’t allow consumers to plug and play.

Plug and play solar panels connect to an ordinary electrical outlet. You’re still on the grid, but you’ve become a “prosumer” — a consumer of energy who also produces it. The panels range in wattage and are relatively affordable, with some costing just a couple of hundred dollars. A prosumer can start small, with just one panel, and slowly build up over time to a system that produces 1 kilowatt of energy, the equivalent of powering 10 100-watt light bulbs.

The panels are also portable. So, for example, if a college student buys one 250-watt plug and play panel each year for four years, reaching 1 kilowatt of energy by senior year, that student can unplug the four panels when she graduates and take them to her next destination.

Pearce estimated that plug and play systems could generate more than four times the amount of electricity generated from all of U.S. solar last year.

“The vast majority of this energy never leaves the home,” Pearce said. “It’s the equivalent of handling a hair dryer load. We’re talking about almost nothing on the electrical grid – but that nothing adds up. It’s an appliance with a high rate of return.”

In the U.S., a patchwork of local jurisdictions and regulations make it difficult to figure out if and where plug and play panels are allowed.

“You can buy the panels, but you might not be able to plug them in, depending on your utility,” Pearce said.

In a paper published earlier this year in Solar Energy (DOI: 10.1016/j.solener.2016.06.002), Pearce, Mundada and researcher Yuenyong Nilsiam reviewed all regulations in the U.S. that would apply to plug and play systems. They found no safety or technical issues with the equipment on the market.

“This is an area where less regulation could really help renewable energy,” Pearce said. “We know that the technology is safe, and the law should reflect that.”

The risk, according to Pearce, is putting too much current on one circuit, so he recommends that homeowners keep their plug and play systems to a kilowatt or less. Simple precautions make this easy — if a panel is plugged into an outdoor outlet, for example, safety plugs on all other outdoor outlets on that circuit can prevent overload.

While some jurisdictions have recognized that there are no major safety or technical issues with plug and play panels, paperwork holds up the process. Potential prosumers often have to fill out complicated forms to fulfill utility requirements, and the paperwork and associated fees vary by utility. To simplify the process, Pearce and colleagues automated it, by writing open-source computer code that fills out every possible technical requirement. Utilities can easily use the free code on their websites.

“Some utilities have embraced plug and play, and some have ignored it because they think it’s a pittance,” Pearce says. “But plug and play solar is something that can help most Americans.”