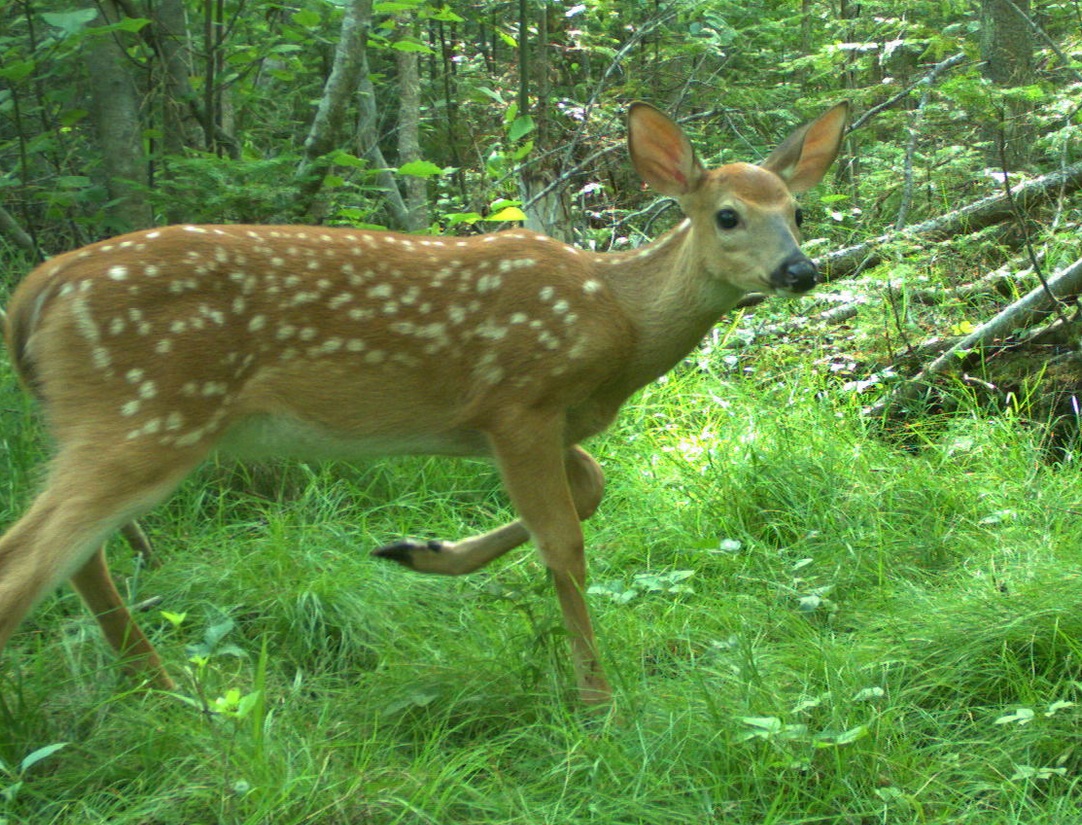 PELLSTON — University of Michigan wildlife ecologist Nyeema Harris and graduate student Corbin Kuntze are deep in the woods in the southeast corner of the UM Biological Station, a 10,000-acre property at the northern tip of Michigan’s Lower Peninsula.

While Harris looks on, Kuntze crawls slowly on all fours, imitating a coyote or a bear while glancing at the flashing red light on a digital camera strapped to the base of a hemlock trunk.

“We call this the walk test,” Harris said. “We need to simulate various animals passing in front of the camera, to make sure it goes off when it’s supposed to and that we get the small ones as well as the bigger ones.”

The U-M Biological Station is one of three Michigan sites—the others are in the Upper Peninsula and at a wildlife refuge near Saginaw—where Harris’ team recently installed motion-triggered “camera traps” to capture snapshots of the state’s diverse wildlife. They’re mainly interested in carnivores, the meat eaters.

The three-site wildlife survey uses about 150 digital cameras that will yield hundreds of thousands of snapshots. A fourth site is planned for Detroit to track urban wildlife in city parks next summer.

It’s the largest-ever camera-trap study of Michigan wildlife, according to Harris.

To help identify all those animals, the researchers have enlisted the support of volunteer citizen scientists—including Michigan students of all ages—in a project called Michigan ZoomIN, which launched this month.

“It’s a massive field effort followed by a massive identification effort involving hundreds of thousands of images,” said Harris, an assistant professor in the U-M Department of Ecology and Evolutionary Biology who also conducts camera-trap studies in Africa. “So our citizen scientists will be a huge help to us, whether that person is an elementary school student in Detroit or a retired accountant in Montana.”

Specifically, the researchers want to know how the animals’ daily activity patterns, the types of habitats they use, their diet and even the parasites that plague them differ between locations. This data trove is expected to yield insights for wildlife management and conservation efforts now and in the future, as these animal populations shift in response to human-induced pressures such as urbanization and climate change.

The study, which also includes the collection and analysis of animal scat and hair fibers, will enable the researchers to revise outdated wildlife “range maps,” which show where various species are found in the state.

“Our first question is: Is the species there?” Harris said. “Before we can figure out what a coyote eats or what a raccoon eats, we need to confirm that those species are actually there. That’s what the camera traps allow us to do.

“We think we know exactly where these animals are in our state, but we don’t. These communities are dynamic, not static. Things are shifting and changing constantly.”

For example, the team’s survey at the Shiawassee National Wildlife Refuge near Saginaw has already detected bobcat. That location is outside the current distribution maps for the species.

“So doing an on-the-ground study gives you indisputable visual evidence confirming what species are there,” Harris said. “And the baseline we’re establishing today will help us think more clearly about how things might change in the future.”