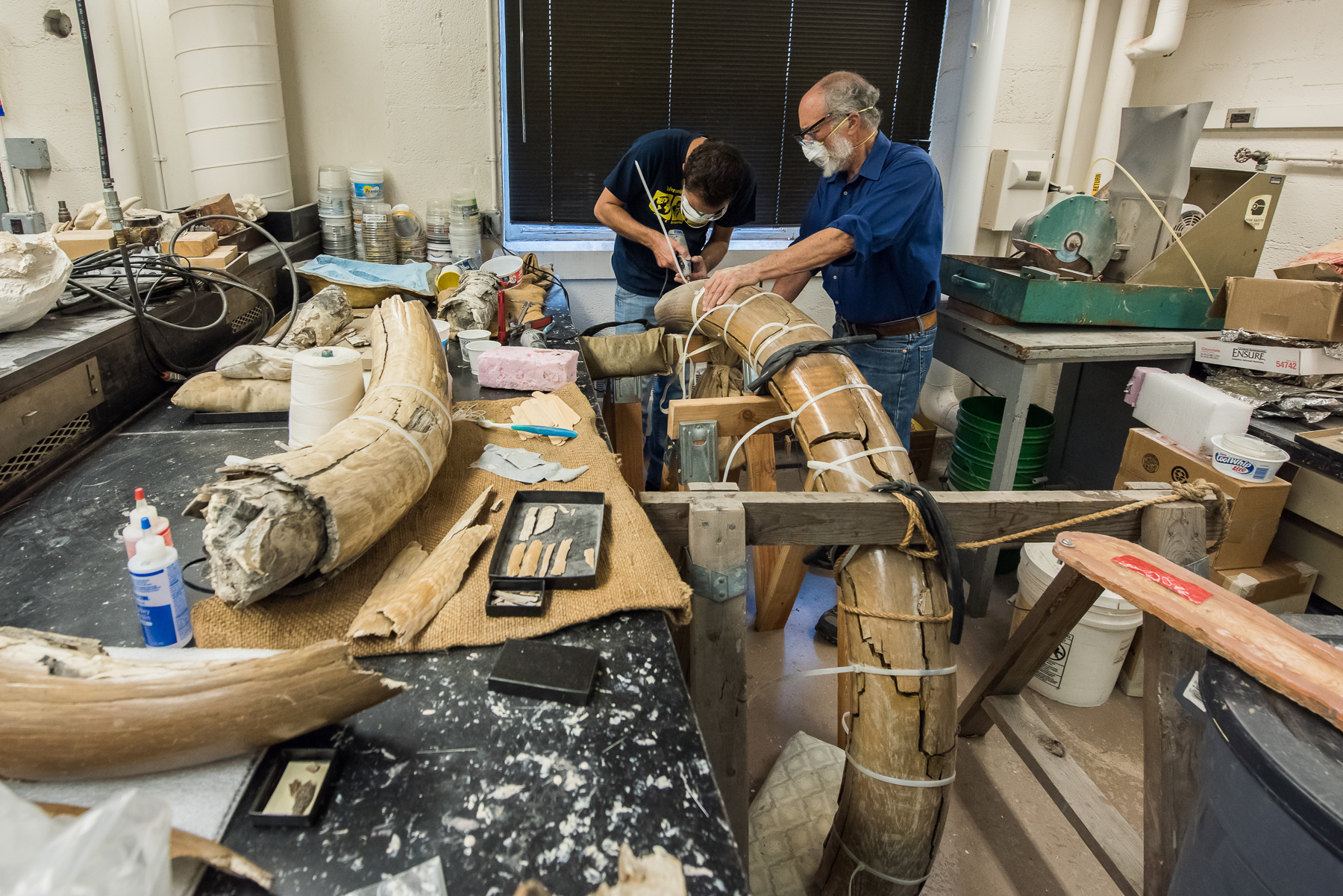 ANN ARBOR — On the fourth floor of the University of Michigan’s Museum of Natural History, in a large gallery set aside for temporary exhibits, a room has been built to display the remains of an ice age mammoth pulled from a farmer’s field near Chelsea on Oct. 1, 2015.

The Bristle Mammoth exhibit opens to the public Saturday, Nov. 5. And unlike most other museum exhibits, the designers left empty space to accommodate additional research findings and mammoth remains that could be added in the future.

That’s because the Bristle Mammoth investigation is a scientific work in progress. And if tantalizing preliminary results are confirmed through additional studies — including a planned return to the Bristle family’s farm near Chelsea next month for a second excavation — the museum curators will likely need every square foot of that extra display space.

A multi-pronged analysis of Bristle Mammoth bones, tusks and teeth over the past year suggests the specimen could help rewrite the story of Michigan prehistory, specifically the timing of the arrival of the first humans and their earliest interactions with mammoths, whose meat was a prized food source.

The oldest well-documented, published evidence for humans in Michigan is about 13,000 years ago, the age of the spear-wielding Clovis hunters. But several lines of evidence from the Bristle Mammoth, including a single, noteworthy radiocarbon date, imply that humans processed its carcass more than 1,000 years before the Clovis hunters arrived.

If the preliminary findings can be bolstered and then published in a peer-reviewed scientific journal, James Bristle’s farm could join a handful of well-documented pre-Clovis archaeological sites in the Americas, including locations in Texas, Washington, Oregon, Pennsylvania, Wisconsin, Florida and South America.

“What’s so interesting about the Bristle site is that there’s a mammoth with evidence of human association at a very early date — well before Clovis times,” said UM paleontologist Daniel Fisher, who led the Bristle dig and who is overseeing the analysis of the remains.

The first radiocarbon date is considered preliminary and will be reported when the team submits its findings for publication.

“That makes it all the more important to do a complete documentation of this site, and that’s why we intend to return to the Bristle farm and open a second excavation adjacent to where we dug before,” said Fisher, director of the UM Museum of Paleontology and a professor in both the Department of Earth and Environmental Science and the Department of Ecology and Evolutionary Biology.

The first mammoth bones were discovered last year while Bristle was installing drainage pipe at a low spot in one of his fields. Bristle gave UM researchers one day to recover whatever remains they could find; after that, the drainage project needed to resume.

As soon as the UM team opened the excavation the morning of Oct. 1, 2015, they exposed the skull with both tusks still attached, and a number of other bones. The team spent most of the day uncovering the skull and tusks, using a backhoe to hoist them from the muddy pit as daylight faded.

Several days after the dig, the Bristles donated the mammoth remains to UM.

“The striking thing about this project is how incredibly excited people are about it,” said Amy Harris, director of the UM Museum of Natural History. “The community has shown more excitement about the Bristle Mammoth than any other project I can remember.”

A direct mail and crowdfunding campaign raised about $48,000 to pay for the exhibit and to help defray Fisher’s ongoing research expenses.

“This exhibit is really about viewing research as an unfolding process of discovery,” Harris said. “We don’t find all the answers right away. It takes time to pursue lines of investigation.”

The Bristle exhibit will remain on display until January 2018 and will then move to the Museum of Natural History’s new home in the UM Biological Science Building, which is under construction now.

“I didn’t realize how big this was going to be, how important it would be to a lot of people. It’s still overwhelming to me,” Bristle said. “Any inconvenience to us is a small price to pay for what we may learn. Who am I, in the whole scheme of things, to stand in the way of learning more about our past?”

Late in 2015, once the mud was washed from the bones, Fisher’s crew began documenting three main lines of evidence for human involvement with the Bristle Mammoth. The animal was a male in its mid-40s and would have weighed about 9 tons.

First, they found what Fisher describes as “intentional breakage” of multiple skull bones “targeted toward removal of nutritious tissues that humans might wish to harvest,” including the brain, the trunk and the tusk pulp cavities. Wooden, stone or bone tools were apparently used to break bones around the base of both tusks, the base of the trunk, and along the back rear portion of the skull, Fisher said.

For the upcoming exhibit, the researchers modeled the broken skull fragments digitally and used a 3-D printer to make plastic replacements for them. Exhibit visitors will see the real skull on display, fitted with a mosaic of white plastic segments so the scientists can continue to study the real broken bones.

The exhibit will also include a fiberglass cast of the Bristle Mammoth’s left tusk, which is 11 feet long and curved like a banana with a slight spiral twist.

The second line of evidence for human involvement with the Bristle Mammoth consists of three boulders recovered alongside the skull during the dig. One is the size of a medicine ball, one is about as big as a basketball, and the third is roughly the size and shape of a football.

The mammoth bones were found embedded in fine-grained pond sediments, with no signs of a stream or other natural geologic feature that could have carried the boulders to their final resting place next to the mammoth skull. Fisher suspects early humans butchered the carcass and placed selected portions at the bottom of the pond for storage, then used the boulders to anchor their meat stash.

The third line of evidence for human involvement fits into the meat-storage scenario. Some of the recovered bones were fully articulated when found, meaning they remained in the same positions, relative to each other, as when the animal was alive.

But some of these fully articulated sections were separated from other parts of the carcass, as if placed in separate piles. Such a pattern is unlikely to occur naturally but could happen if humans placed chunks of the carcass in the pond for storage, Fisher said.

During the Bristle dig, 55 to 60 nearly complete mammoth bones were found. In addition to the skull with teeth and tusks, most of the vertebrae and ribs were found, along with parts of the shoulder blades and the pelvis.

Altogether, 30 to 40 percent of the animal’s skeletal mass was recovered, Fisher said. Notably missing are the limb and foot bones and the tail vertebrae. One goal of the second excavation is to find more bones.

But a much higher priority during the second dig will be to reconstruct the geological context of the mammoth remains, something that simply wasn’t possible during last year’s get-what-you-can-in-a-day dig. The Bristle bones were found about 10 feet below the current land surface, in fine-grained clays and marls from a pond that no longer exists.

A prime goal of the next dig is to sample each of the sediment layers above the bones, as well as the clays up to 2 feet below the bone layer. Whenever possible, organic material from each layer — whether it’s twigs or spruce cones or just the remains of phytoplankton that grew in the ancient pond — will be radiocarbon-dated. Pollen grains and fungal spores will also be analyzed in this effort to reconstruct ancient environments and provide proper context for the mammoth find.

“If we went down to a depth of 12 feet, that would be back 16,000 years or so, shortly after the ice sheets melted back, revealing the landscape of Michigan’s Lower Peninsula,” Fisher said. “And if we could get a series of dates from the sequence of sediments in the various layers, then the expectation would be that the lower ones would be older than the higher ones. And those radiocarbon dates had better come back from the lab in the expected order, or you’re going to know that something is seriously wrong.”

Other tests completed or under way include a season-of-death study and a mitochondrial DNA analysis.

In the season-of-death study, growth layers in the base of the mammoth’s tusk are analyzed using microCT scans to determine the time of year the animal died. Autumn is typically the time when early hunters pursued mammoths and mastodons, because that’s when it was critical to cache food for the winter, Fisher said. Also, these extinct relatives of elephants gained weight throughout the summer and were in prime condition by fall.

On the other hand, late spring or early summer deaths have been associated with animals that died in mating-season battles. Death from starvation, in contrast, would have been more likely at the end of winter.

Mitochondrial DNA is genetic material passed from mother to offspring. The Bristle Mammoth’s skeleton shows physical signs that it may have been a hybrid between a woolly mammoth and a Columbian mammoth, Fisher said. Such hybrids are not unusual among the mammoths found in the Great Lakes region.

The mitochondrial DNA test will examine the animal’s matrilineal ancestry to see if its genetic inheritance supports hybridization between a woolly and Columbian mammoth.

Over the decades, pieces from about 300 mastodons and 30 mammoths have been recovered in Michigan. The UM Museum of Natural History currently displays two mounted mastodon skeletons but has not previously exhibited mammoth bones, according to Harris.

In addition to the skull and tusk, the Bristle exhibit will include a sequence of neck vertebrae, part of the pelvis, part of the mandible, and a rib that visitors can touch.  Those specimens are real mammoth bones, not casts.

Visitors will also be able to closely examine some of the mammoth bones by manipulating 3-D digital models on a touch-screen monitor. Dramatic videos from the October 2015 dig will also be available, along with a life-size mammoth silhouette suitable for selfies.