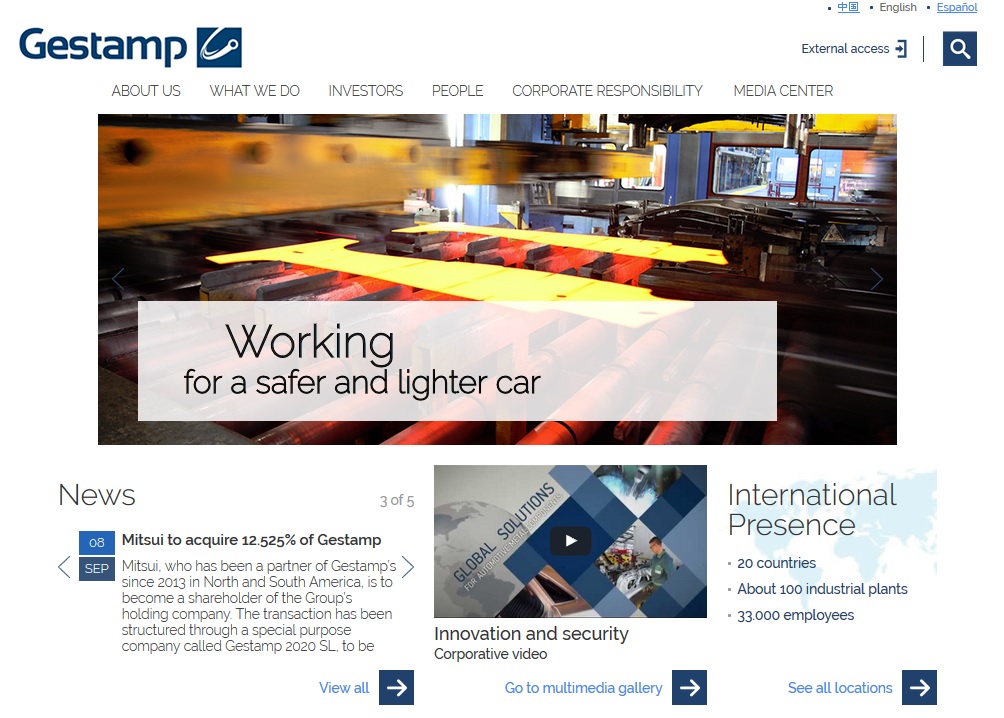 The international supplier of automotive chassis, bumpers, hinges and other components, plans to invest $158 million at its plants in Chelsea and Mason, and an additional $700,000 at its North American headquarters in Troy. A total of 235 jobs will be created at the Chelsea and Mason plants, and another 60 new jobs in Troy.

Gestamp Washtenaw LLC, a new subsidiary of Gestamp, will invest $68 million and create 195 new jobs in Chelsea over the next four years.

The company specializes in products that lead to the development of lighter, safer, more energy efficient and environmentally friendly vehicles. In Chelsea, Gestamp is building a chassis assembly line, and electronic coat paint line, as well as add a laser welding line.

As a result, Gestamp was awarded $1.575 million in Michigan Business Development Program performance-based grants from the Michigan Strategic Fund. The grant is administered by the Michigan Economic Development Corp., the state’s marketing and business attraction arm, which also researches and measures progress on the state business grants.

For three consecutive years, Michigan has ranked among the top seven U.S. states for major new and expanded facilities, according to Site Selection. In addition, Michigan is the top state for fabricated metal product and primary metal manufacturing, according to the Center for Automotive Research.

Michigan is home to 63 of the top 100 North American automotive suppliers with the largest concentration of automotive-related research and development centers in the nation. Michigan is also home to Lightweight Innovations for Tomorrow (LIFT), whose mission is to assist Michigan-based automakers and manufacturers to find ways to build high-tech, safer, and cost-and-fuel efficient vehicles. LIFT shares a 100,000-square-foot innovation acceleration center in Detroit’s Corktown district with the Institute for Advanced Composites Manufacturing Innovation, a recipient of a $70 million grant last year from the U.S. Department of Energy to fund composites manufacturing research.

“Michigan provides the best environment for us to compete and succeed in our mission to develop lighter, safer, more energy efficient and environmentally friendly vehicles,” said Jeff Wilson, president and CO of Gestamp North America and Asia Pacific. “We take great pride in our innovation and technologies, and are strategically located to benefit from the many advantages of being headquartered in the preeminent automotive-industry state.”

Wilson said Gestamp plans to expand operations in Chelsea with a new chassis assembly line, electronic coat paint line, and a press-hardening line with an integrated laser cutting cell in Mason. Both the cities of Mason and Chelsea have offered support to the project with property tax abatements.

The city of Troy will provide marketing and promotion assistance in support of Gestamp North America expanded headquarters. The metro Detroit suburb was selected over competing sites in the southern U.S. and Mexico.

Ann Arbor Spark, the economic development agency for Washtenaw and Livingston counties, supported the project with assistance throughout the process of applying for and obtaining incentives.