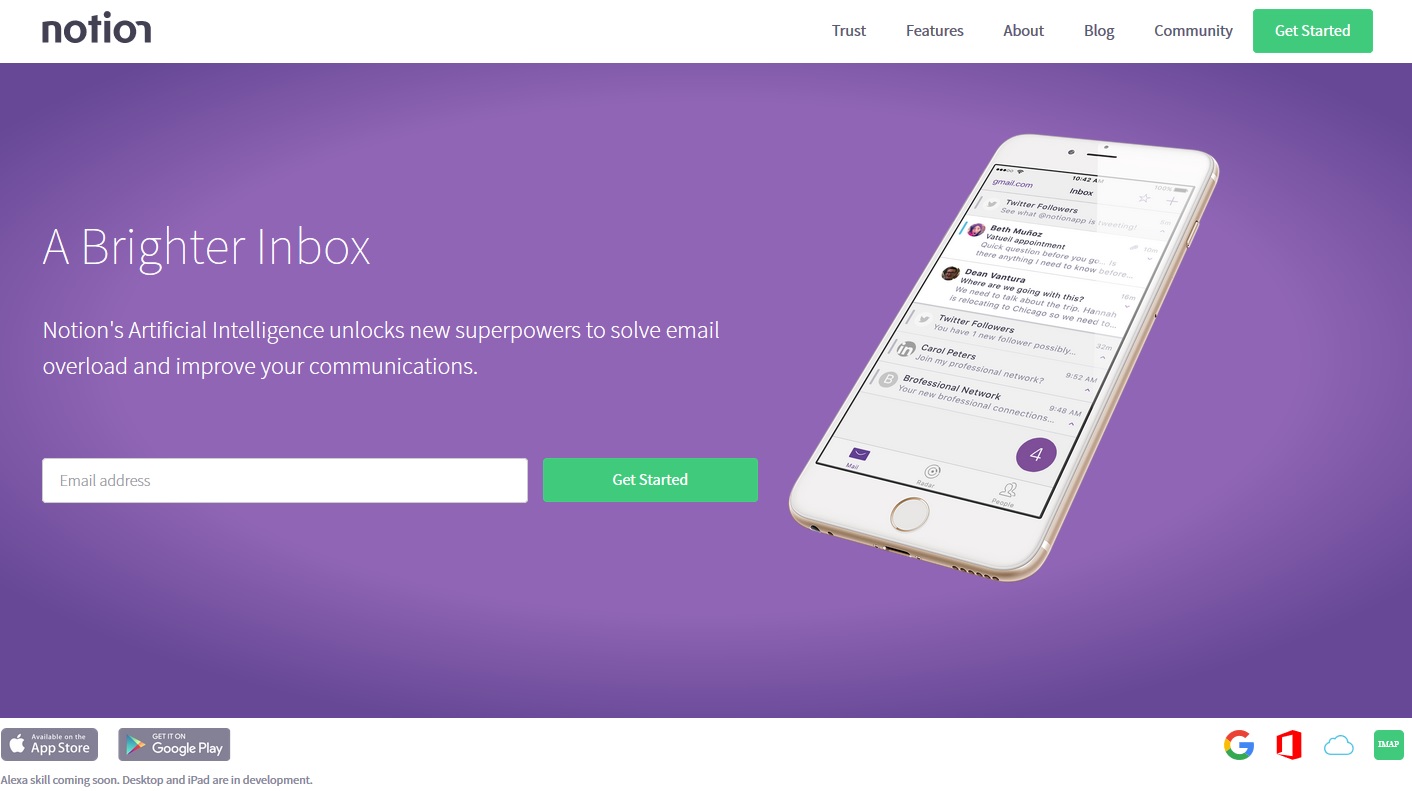 ANN ARBOR — A new company called Notion AI Inc. has launched with $9.5 million in capital, promising a better way to manage the deluge of email faced by many office workers today.

Notion’s initial offering is a mobile email app, now available in the App Store for iPhone and Google Play for Android. The app works with existing email services. The company says it saves people time and reduces communications stress. By understanding which messages are most important to the user, Notion makes keeping up easier. Notion also improves responsiveness by highlighting emails waiting for replies so people get the answers they need and no longer have to worry about dropping the ball.

Notion noted that in 2015, people sent and received more than 205 billion emails each day, and that 25 percent of the average worker’s day is spent on email, making it the second most time consuming activity in their jobs.

Subscribers to Notion get access to insights about their relationships with the people behind every email. In this way, Notion uncovers the largest social network users already have, which, until now, has been buried in their email history. Expanded access to Notion’s cloud intelligence is planned for desktop on Mac and Windows, via the Web, and more.

Also available soon, subscribers can link Notion to Amazon’s personal assistant device, Alexa, for a voice-activated experience that lets users talk to their email. Through the integration, Alexa can read important emails, emails waiting for replies, relationship details and even archive, snooze or send messages — all through voice communication. This allows people to stay on top of important email without being tied to their phone.

A demo is available at https://www.youtube.com/watch?v=ux-uzPFE4rI.

“Today’s communication tools offer little in the way of improving the way we communicate or the underlying relationships behind our conversations,” said Guy Suter, co-founder and CEO of Notion. “Artificial intelligence will improve how people communicate by focusing our time and encouraging behaviors that build stronger relationships.”

Notion promises strict standards for user security and privacy in its operations and policies. Notion’s policies, which transparently outline the data it collects, are publicly available at https://www.notion.ai/trust.

Notion was founded in 2013 by CEO Guy Suter and technical co-founders Lindsay Snider and Ian Berry. The trio co-founded data backup company BitLeap, which they led to become the world’s top-selling backup appliance product after being acquired by Barracuda Networks in 2008. By combining their expertise in building powerful data platforms with talent from the University of Michigan in their backyard, the three turned their attention to tackling today’s communication overload. Jason Mars, University of Michigan professor and AI research team co-director, and CEO of applied AI startup Clinc, is an advisor. Additionally, Notion employs current and former University of Michigan students.

Notion will focus on expanding its cloud intelligence technology to power the next suite of features for the Notion app and beyond.

“Notion is built on cutting-edge AI technology, applied in ways we’ve dreamed of and are only now able to realize,” said Mark Kvamme, partner at Drive Capital. “The Notion team has a vision that extends beyond email. They have goals, and the means and expertise, to use AI to impact the way we all communicate. In this age of social media, texting, and email reliance, Notion wants to put people back at the center of communication.”