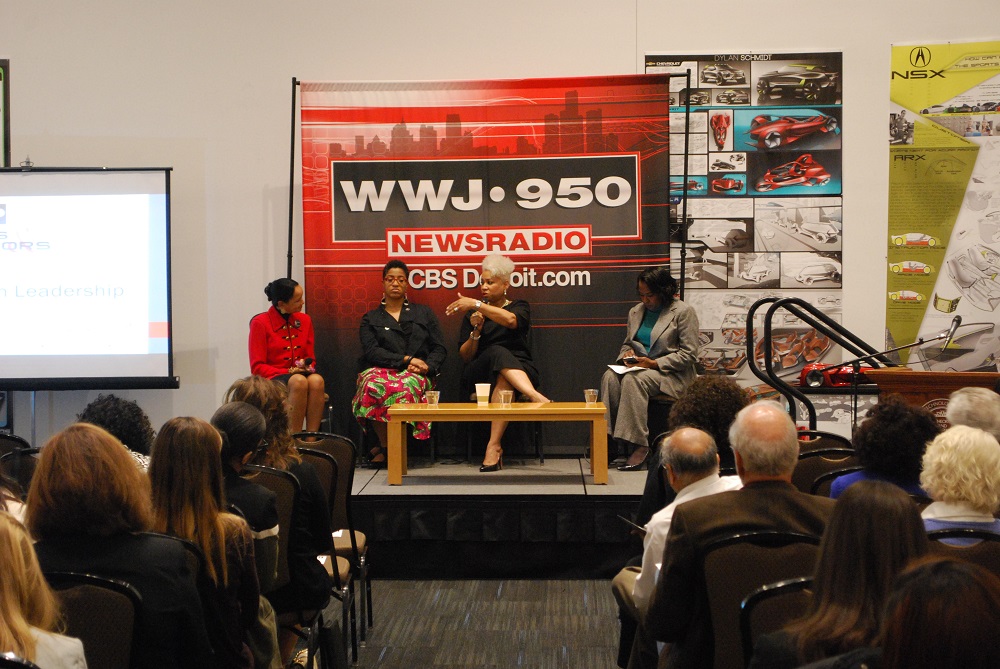 SOUTHFIELD – Good leadership requires getting outside your comfort zone, responding well to criticism, keeping lines of communication open, and taking care of the community, family and friends.

That was the word Thursday morning from a panel discussion on “Women in Leadership” at Lawrence Technological University, part of the “Leaders & Innovators” series sponsored by LTU and WWJ Newsradio 950.

WWJ reporter Vicki Thomas moderated the discussion, which was attended by more than 100 people.

Sommer Woods, director of external relations for Detroit’s M-1 Rail project, said that when it comes to career success and leadership, “You don’t really live until you are in an uncomfortable zone. That’s when you grow.”

And in a career that started with the male-dominated PGA Tour, she joked, “I have been uncomfortable my entire career.”

Leadership also requires a compassionate, human touch, according to panelist Lisa A. Newman, M.D., director of the breast oncology program at Henry Ford Health System. She defined leadership in part by paraphrasing former First Lady Jacqueline Kennedy Onassis, who said that if you’re not proud of how you’ve taken care of your family, no other success will matter.

“Now that doesn’t only mean raising kids,” she said. “Your family also includes your community and your friends, all the people who love you and care for you. And if you don’t take care of them, everything else will pale by comparison.”

Panelist Janice Cosby, chief marketing and communications officer for the Catholic healthcare system Ascension Michigan, noted that she was originally a music major and wanted to be a Broadway star. When she moved to Michigan in 1984, she returned to school at Wayne State University, where an advisor noted her writing talent and advised her to switch to public relations, marketing or journalism.

“I’m glad I listened,” she said. “We may want to do one thing, but other people may see something else in us.”

She also said real leadership has to involve giving back to the community. She said her job in health care marketing has given her a sense of giving back by helping to prevent disease.

All three panelists also said the current presidential campaign has offered both good and bad examples of leadership.

“A good leader is one who inspires, who can listen, but who can also get down in the mud with their associates,” Cosby said.

Cosby also recommended seeking out a trusted friend when criticism comes. “That person will give you honest feedback,” she said.

And Newman said a good leader should provide the same kind of example as a parent does to a child.
“We have to always provide guidance,” she said. “People have to understand they can always come to us when they have questions.”