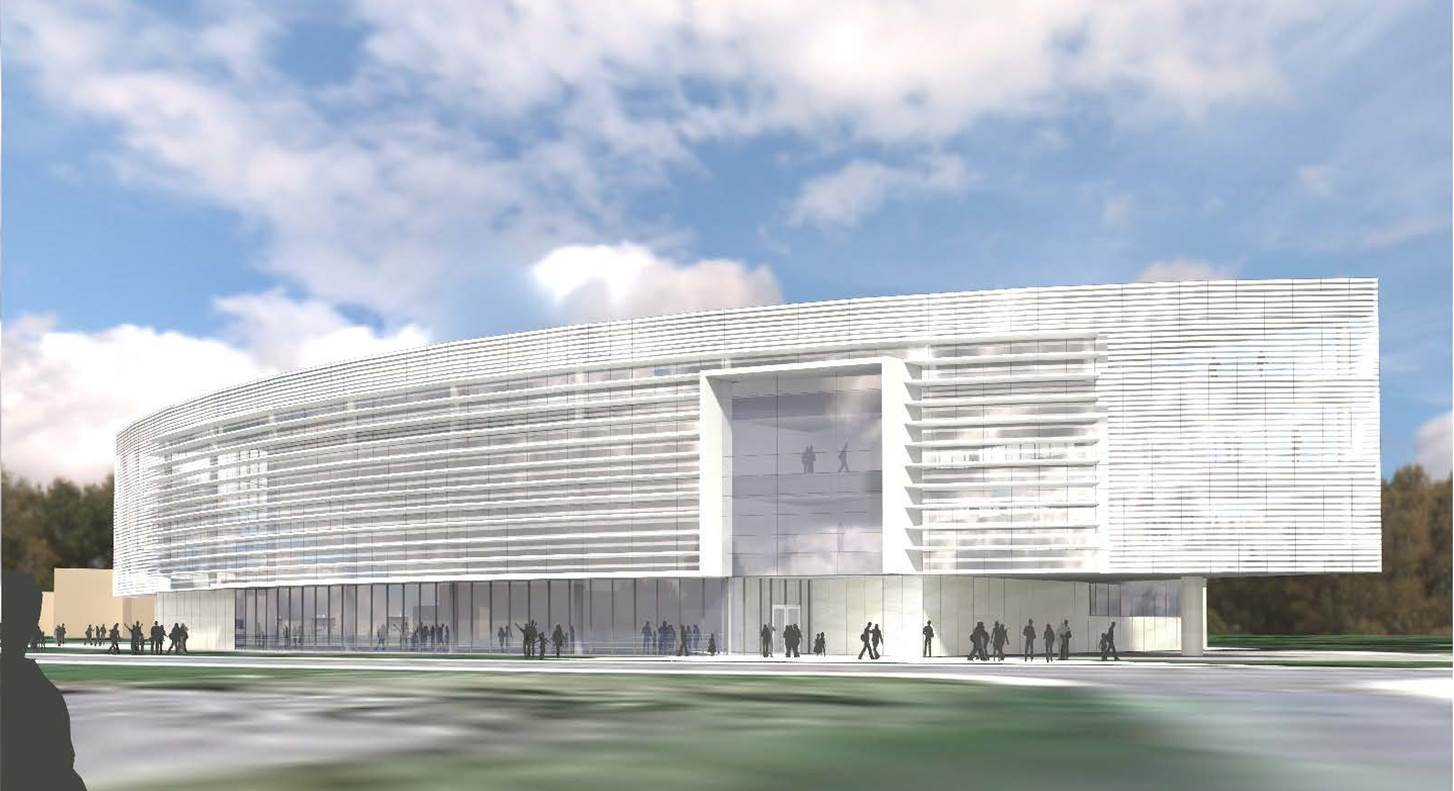 ANN ARBOR — Robotic technologies for air, sea and roads, for factories, hospitals and homes will have tailored lab space in the University of Michigan’s planned Robotics Laboratory.

The UM Board of Regents has approved the schematic design for the $75 million building, which is slated for the northeast corner of North Campus in the College of Engineering.

The 140,000-square-foot building will house a three-story fly zone for autonomous aerial vehicles, an outdoor obstacle course for walking robots, and high-bay garage space for self-driving cars, among other features.

Also, Ford Motor Co. will provide funding to add a fourth floor that it will lease for dedicated space where Ford researchers will eventually be based. The shared space grows a long-standing and broad partnership between UM and Ford that includes projects to advance a variety of technologies such as driverless and connected vehicles.

Construction is scheduled to begin after a comprehensive fundraising effort for College of Engineering funds and be completed in winter 2020.

Mcity, UM’s simulated urban and suburban environment for controlled testing of advanced mobility and autonomous vehicles and technologies, is located a half mile from the Robotics Laboratory site.

Said Alec Gallimore, the Robert J. Vlasic Dean of Engineering: “Robots have come a long way from programmed machines bolted to the factory floor. Today they move through the world around us. They communicate and interact with each other and with us. They’re making our work, our travel and our lives easier, more efficient and safer.”

Fifteen professors will be core robotics faculty members when the building opens, and more than 35 across the university are working in the field. They are developing prosthetic limbs that could one day be controlled by the brain, an autonomous wheelchair that can sense obstacles and avoid them, efficient walking robots that have the potential to assist in search or rescue operations, and self-driving and connected cars designed to transform transportation, among other innovations.

Most of the core faculty members conduct their research on an actual robot, which is unique to UM.

“What makes us special is that most of us here do both robotics theory and hardware,” said Jessy Grizzle, the Elmer G. Gilbert Distinguished University Professor and the Jerry W. and Carol L. Levin Professor of Engineering. “Many places with strong robotics reputations are computer science-dominated and they don’t test their theories on machines to the extent that we do. At UM, most of our faculty members have an in-house robot. We put our algorithms in motion.”

Grizzle has been named director of robotics at UM. He came to the university in 1987 as a feedback control theorist, but quickly expanded his research into other areas. Among his achievements is the development of a theoretically sound and efficient method for control of bipedal robot locomotion, which resulted in the world’s fastest two-legged running robot with knees.

He was also a key player in pioneering a model-based programming approach to the control of hybrid electric vehicles that is rapidly becoming an industry standard. The approach takes into account the random fluctuations in traffic patterns to make these vehicles as efficient as possible.

“This new facility will give us cutting-edge lab space to test our theories on a broader scale, and in a collaborative environment that invites the exchange of ideas,” Grizzle said.

The building’s schematic design shows a slate gray and silver façade integrated into the environment in a style described as “machine in the garden.” In addition to the specialized labs, it will include two large shared lab spaces, a startup-style open collaboration area, offices for 30 faculty members and more than 100 graduate students and postdoctoral researchers, and two classrooms. UM offers interdisciplinary master’s and doctoral degrees in robotics.

An atrium will be flanked by glass walls that serve as windows into high-tech labs and a museum for retired robots. Public and school tours will be available.

The partnership that puts Ford engineers on the fourth floor is designed to enrich opportunities for collaborative research, as well as provide educational opportunities for students to gain hands-on experiences.

“With the new building’s proximity to Mcity, Ford and UM are poised to accelerate the development of autonomous vehicles,” said Ken Washington, Ford vice president of research and advanced engineering. “This co-located lab on the UM campus will magnify and deepen a collaborative research effort that is already unprecedented in scale.”

With a decade-long history, the Ford-UM Innovation Alliance has led to nearly 200 collaborative research projects. Its joint autonomous vehicle project is the largest university research effort Ford has sponsored on any campus, and the largest industry-funded individual research project at UM. The technical innovations Ford and UM produce through it are intended to deliver order of magnitude reductions in traffic deaths and collisions.

The robotics building project is expected to provide an average of 66 onsite construction jobs.

Grizzle will take part in a Reddit Science AMA (ask me anything) about his work with bipedal robots 1-2 p.m. Wednesday, Sept. 28.