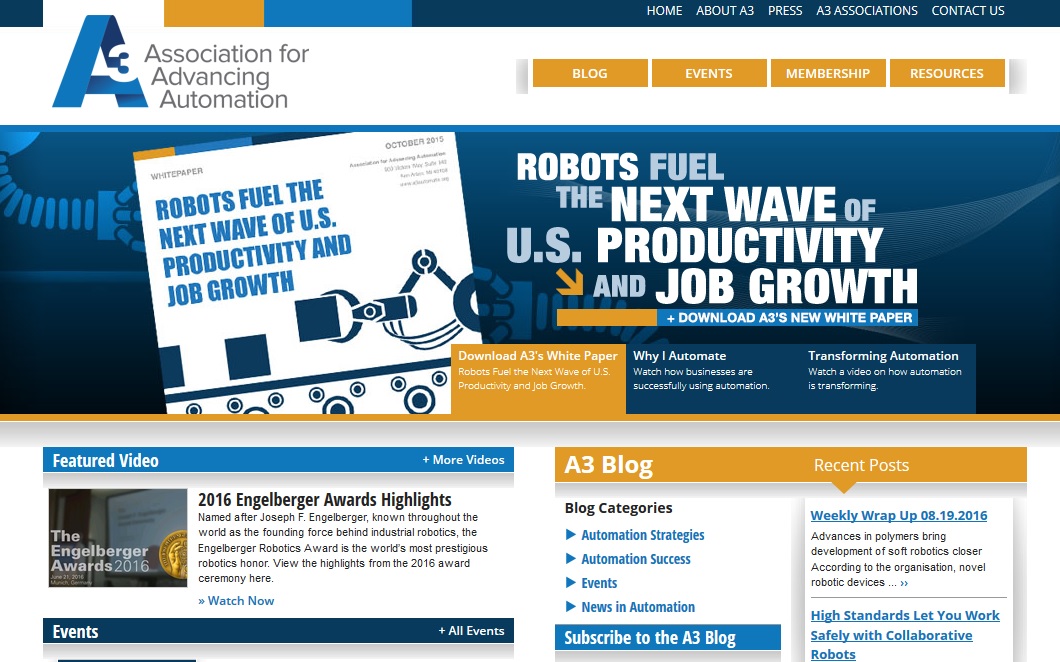 ANN ARBOR — The North American automation industry has set new records to begin 2016, according to the Association for Advancing Automation, the industry’s Ann Arbor-based trade group.

A3 is at its highest membership level ever, welcoming 119 new member companies so far in 2016. A3 now represents 965 member companies directly involved with robotics, vision, motion control and motors.

The number of robots ordered by automakers and suppliers rose 16 percent and 4 percent respectively to begin the year, and was the largest driver of the market’s record performance. Similarly, the food and consumer goods industry soared in the first half of the year, ordering 41 percent more robots than the same period in 2015. Total orders to all other non-automotive industries fell 14 percent. In terms of applications, the biggest increases were realized in inspection (69 percent), assembly (38 percent), and spot welding (21 percent). RIA estimates that some 265,000 robots are now at use in North American factories, which is third to only Japan and China.

“The robotics industry is thriving today as more companies of all sizes are realizing the benefits of automation,” said Jeff Burnstein, A3 president. “The increasing functionality, flexibility, affordability and safety of robots today contributes to how this dynamic market is reshaping the global manufacturing landscape.”

Global shipments for motion control products grew 3 percent to $1.54 billion in the first half of 2016.

“The encouraging first half performance was largely driven by growth in three important product categories,” said Alex Shikany, MCMA Director of Market Analysis. “Two of the largest segments we track, actuators/mechanical systems (up 11 percent and electronic drives (up 8 percent), saw strong growth in the first half of the year. Motion controllers, one of the hottest current product markets, also increased by eight percent in the first half of 2016.”

The second quarter of 2016 increased on a year over year basis 5 percent to $820 million. The categories which grew the most in the second quarter were electronic drives (up 16 percent), actuators and mechanical systems (up 12 percent, and motion controllers (up 11 percent). Additionally, the latest MCMA survey of motion control and motor suppliers revealed that the majority of industry experts believe the market will increase in the next six months.

The machine vision market entered 2016 on the heels of two consecutive record-setting years for sales in North America. Despite a 7 percent cyclical contraction in the first half of the year to $1.1 billion, which was largely tied to the stagnation in the semiconductor industry, the machine vision market in North America remains a key growth segment within the booming automation landscape.

As the “eyes” of emerging smart-factories and robotic systems, machine vision is critical to the success of next-generation automation solutions. Products such as smart cameras, which are complete vision systems contained within the same camera enclosure, are opening new application areas for manufacturers. In North America, the smart camera category has grown four percent year over year to $157 million in the first half of 2016.

Burnstein also noted that A3 is seeing the growing demand for machine vision, robotics, and related automation in events like the upcoming Automate 2017 trade show.

“The exhibit floor at Automate 2017 is expected to be significantly larger than our 2015 event,” he said. “This growth is attributed to the fact that leading automation companies are reaching out to small and medium sized customers. These companies, many of whom are just now beginning to explore automation, make up the core of the Automate 2017 attendee base.”

Automate 2017, the industry’s trade conference, will take place April 3-6 at McCormick Place in Chicago. For details on Automate, which is held every two years, visit www.automateshow.com.