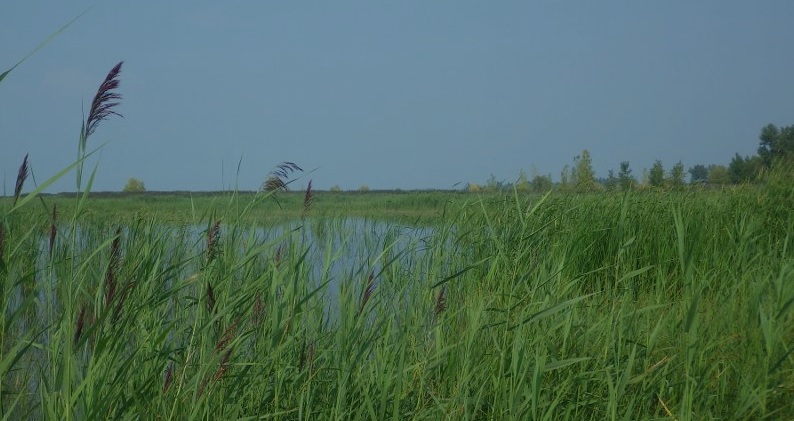 Laura Bourgeau-Chavez and Colin Brooks — research scientists at the Michigan Tech Research Institute, the Ann Arbor research center of Michigan Technological University — and Casey Huckins, a professor of biology at Michigan Tech, are leading projects to develop better management strategies to protect the state’s shorelines along the Great Lakes.

Bourgeau-Chavez is the lead investigator on a US Environmental Protection Agency Great Lakes Restoration Initiative (EPA-GLRI) project looking at managing Phragmites, a tall, invasive perennial grass known as the common reed, in Saginaw Bay. The work is also supported by the Michigan Invasive Species Grant Program.

“Some Phragmites stands are so dense that you can’t see someone only ten feet from you,” Bourgeau-Chavez said. “We use remote sensing to get a bird’s eye view.”

Bourgeau-Chavez and her team follow a process starting with the big picture from satellite data. Next, they examine site-specific conditions.  Data from previous projects suggests high nitrogen levels help Phragmites outcompete native species. A complementary project through the The Nature Conservancy is working on building buffer zones in agricultural areas. Additionally, water level — particularly in areas controlled by dikes or locks — can also affect the species’ ability to take over. Some parameters can be monitored by remote sensing, but the research team goes the extra mile, backing up the data with samples and field mapping gathered on smaller scales. For this project, they will be managing 310 acres of Saginaw bay to study treatments and field-test their models.

The main goal is to create tools and a reference guide for land managers that integrates local and regional knowledge, high resolution maps and predictive modeling, and outlines the best practices for different treatments.

“Depending on the site, comprehensive aerial spraying isn’t always the best solution; there are birds, fish, amphibians, native vegetation and the broader ecosystem to consider,” Bourgeau-Chavez said, adding that managing Phragmites in the field with herbicide, cutting and burning can be time-consuming. “We want to make sure those treatments are being used most effectively in an adaptive management strategy.”

Milfoil in the Les Cheneaux Islands

Farther north, in the Straits of Mackinac, where Lake Superior and Lake Michigan meet, Eurasian Watermilfoil has spread. In the Les Cheneaux Islands, the ongoing spread of the invader chokes local waterways and has stymied the tourism that drives the area’s economy.

Brooks has a solution up in the air.

“I want to bring tech out of the lab,” he said, adding that the goal in his EPA-GLRI project is to use unmanned aerial vehicles (UAVs or drones) and refined analysis of satellite data to track milfoil invasions in the islands.

“Satellite data can cover a lot of ground,” he said. “But when you need high-resolution, scalable imagery, a drone is the best solution.”

Brooks flies a modified hexacopter to do surveys, which he and his team will be verifying as an efficient and reliable method for field mapping an 800-acre area. The camera on the drone gathers images like the one below.

The drone footage feeds back into the satellite data, and Brooks is developing methods to see milfoil from space. Specifically, he is using spectrometer data to discern different signatures of plants from reflected light that returns from earth to the atmosphere. Milfoil, Brooks said, has a distinct — and very green — fingerprint in reflectance data. (Below is a photo of milfoil in a marina.)

His team will also be doing a 10-acre control test of a native fungus that could help keep the invasive plant in check. He will be working with Amy Marcarelli and Casey Huckins, with whom he collaborates on other invasive species research, to monitor the treatment.

Additionally, Brooks is working with other MTRI researchers and local representatives from the Les Cheneaux Watershed Council. The grant covers two years and totals $470,000.

Huckins, a professor in the Department of Biological Sciences and Great Lakes Research Center at Michigan Tech, is the lead researcher for several milfoil projects funded by the EPA and Michigan Department of Natural Resources that focus more generally on the northern Great Lakes, including the Les Cheneaux Islands. As a biologist with research experience on the ecology of aquatic invasive species, he thinks of Eurasian Watermilfoil as a potential disturbance to the native ecosystem — knowing that “controlling it like a weed” is a common management technique.

“Some people say, ‘throw at it whatever you have, as much as you have,’ so we can just get rid of it,” Huckins said, explaining that milfoil treatments can include mower-like harvesters, beetles, fungi and herbicide applications. “But then there are other communities that aren’t comfortable with putting herbicides and other treatments in their water — so we’re trying to figure out the ecological effects of Eurasian Watermilfoil, what’s the level of the threat and at what point does that threat require treatment.”

Connecting the threat and treatment is not straightforward. Huckins said the milfoil group is particularly difficult because there are native species, an exotic species and many varieties in between — and each hybrid may be genetically different.

“We’re working on linking the genetics of the plants and their sensitivity to herbicides,” he said. “We also then want to understand alternative treatment methods — there are several of them that have been applied with varying degrees of success.”

Additionally, understanding the physical and ecological needs of milfoil is important. For one, it doesn’t do well in deep water, proliferating in shallow bays instead.  Understanding these preferences, and potential adaptations, will help determine the best treatments and predict where invasive milfoil might spread next.