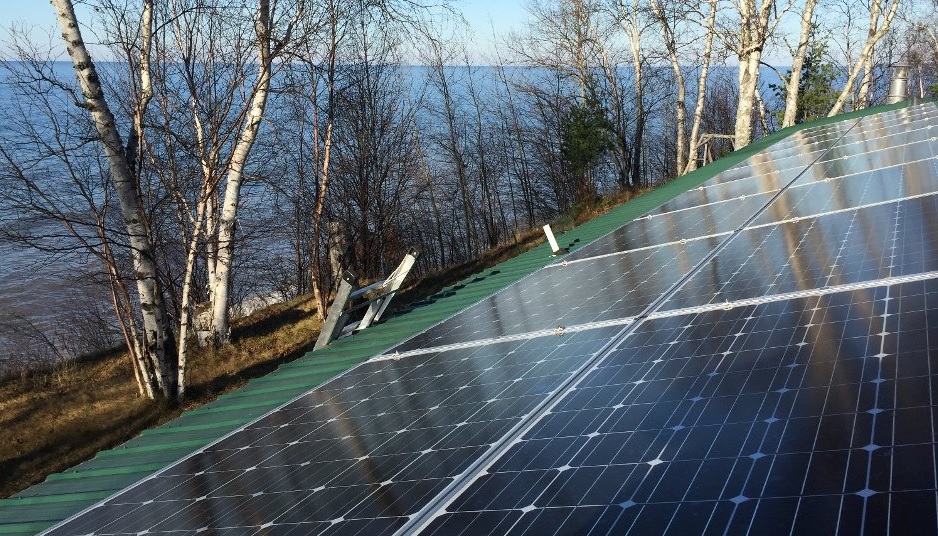 HOUGHTON — While Michigan’s Upper Peninsula is not the sunniest place in the world, solar energy is viable in the region. With new technologies, some people might be inclined to leave the electrical grid. A team from Michigan Technological University looked into the economic viability of grid defection in the Upper Peninsula.

Known for snow rather than sun, the region could still support a significant network of solar photovoltaic energy systems. Solar energy alone in the Upper Peninsula is seasonally restricted. However, solar coupled with cogeneration and batteries could overcome any cloudy, cold winter day.

Michigan Tech engineers and sociologists explored what this new triple-threat technology, and the role of demographics, could mean for energy alternatives in the Upper Peninsula in a new study published in Energy Policy. Their analysis found that by 2020, leaving the electrical grid is a viable economic option for the majority of seasonal households (92 percent) as well as single-family owner-occupied households (65 percent). The study was published in the journal Energy Policy.

Cogeneration systems are small-scale combined heat and power systems, which usually run on natural gas and produce heat as they generate electricity. They can function year-round and are most effective in the winter when solar production is low. Along with improved battery storage, these hybrid systems would not require being tied into the electrical grid. The costs of hybrid systems are coming down and are projected to keep decreasing.

“The costs of centralized energy distribution, on the other hand, are going to be higher than they are today,” says Joshua Pearce, an associate professor of electrical and computer engineering as well as materials science and engineering at Michigan Tech. He co-authored the study looking at the economics behind coupled PV, CHP and battery hybrid systems.

“With these new technologies,” Pearce says, “you can put the CHP in your basement, the battery bank in your garage, and solar on your roof—this could actually work for regular people.”

Recent advances in cogeneration, battery storage and solar have made going off-grid more economically viable for UP residents.

Lucia Gauchia, an assistant professor of electrical and computer engineering as well as mechanical engineering, helped the team determine what battery technologies are needed to make solar-hybrid systems successful.

“PV systems are intermittent, and production depends on whether it’s sunny or cloudy, night or day,” Gauchia said. So, a stand-alone electric system needs a flexible element to balance the load. “And the battery is the only element in the system that can produce or absorb energy.”

In addition to new technologies, the team looked at regional demographics to assess whether or not it makes sense for residents to choose to leave the electrical grid in the Upper Peninsula.

Richelle Winkler, an associate professor of sociology and demography at Michigan Tech, led the demographic analysis. She used utility data on electric rates, data from the 2010 census and income estimates from the American Community Survey. In general, utility rates across the Upper Peninsula vary between average to some of the highest in the nation. Winkler also looked at the number and size of households in each utility service area in the Upper Peninsula along with how many homes are seasonal and how many are year-round residences.

“It is the people living with the highest rates for whom it is economically viable to get off the grid very soon,” Winkler says. “The study shows that even here in the Upper Peninsula, where solar is not as productive as other regions and with a high proportion of relatively low income people, it is starting to be economically viable to get off the grid using a solar-hybrid system.”

Determining the threshold for when buying hybrid systems becomes feasible depends in part on income and people’s ability to get financing. As a baseline, Winkler and her team assumed households making less than $30,000 would not be able to afford solar-hybrid systems, even if technology prices continue to drop as projected. Households making between $30,000 and $149,000 would be able to pursue financing, given current options that don’t require a down payment. Households making more than that are likely to be able to afford solar-hybrid systems directly. Many seasonal residents also have extra incentive to pursue solar for primarily summer residences.

Power to the People

Environmental justice does play a role when considering discrepancy in income, the cost of PV systems and solar-hybrid systems, and availability.

As of now, none of the study’s data takes into account social or cultural drivers that affect solar adoption, environmental justice and social justice. This is a line of research that the team is interested in pursuing in addition to examining options that incorporate CHP and renewable energies into the grid. Unraveling the connections, Winkler says, is “interesting and complicated — in this paper, we showed that it is becoming increasingly viable for people to just get off the grid altogether when good net metering options are not available.”

Net metering — under which solar-producing homeowners are fully compensated for their energy production, in essence giving them the right to sell they excess power they generate back to utilities at the retail rate — is the current policy in place in Michigan. In the Upper Peninsula, there are limits on how much grid-tied solar can be installed. If people did leave the grid, the researchers said, defection could be more disruptive for utility companies and pose challenges to maintaining existing infrastructure at reasonable costs to remaining customers. Also,  two Michigan Senate bills (SB437 and SB438) just came out of committee that will keep a 1 percent cap on residential grid-tied systems. The UP is on track to meet that cap this summer.

Many states, including Michigan, are looking at changing net metering and renewable energy policies, including charging consumers extra fees for installing rooftop solar systems and forcing consumers to sell excess electricity to utilities at the lower wholesale rate, not the higher retail rate. In most cases, the utility and fossil fuel industries are behind these proposals.

The study’s first author and Michigan Tech graduate student Abhilash Kantamneni is invested in policies that help make individual energy access more affordable, reliable and sustainable. For his work in the Keweenaw, Midwest Energy News named him one of “40 Under 40 young leaders accelerating clean energy transition in America.”

“Studies like this one help drive home the urgency for utilities to figure out a path forward,” Kantamneni said, adding that choice and free agency is important to many consumers. “And it’s becoming increasingly easier to choose distributed energy.”

To Pearce, the Upper Peninsula is an extreme example of potential grid defection, but represents a challenge for utilities across the country trying to figure out how to incorporate distributed energy production. Besides the potential for CHP on a home-scale, there are also neighborhood, community and municipal models being proposed.

“For everyone else in America, the Upper Peninsula’s situation indicates that distributed energy is in play and it’s up to the utilities,” Pearce said, explaining that if utilities prevent grid-tied solar with rate manipulation, then customers could simply leave the grid. “Solar hybrid systems are a very different way to operate — it’s literally giving power to the people.”