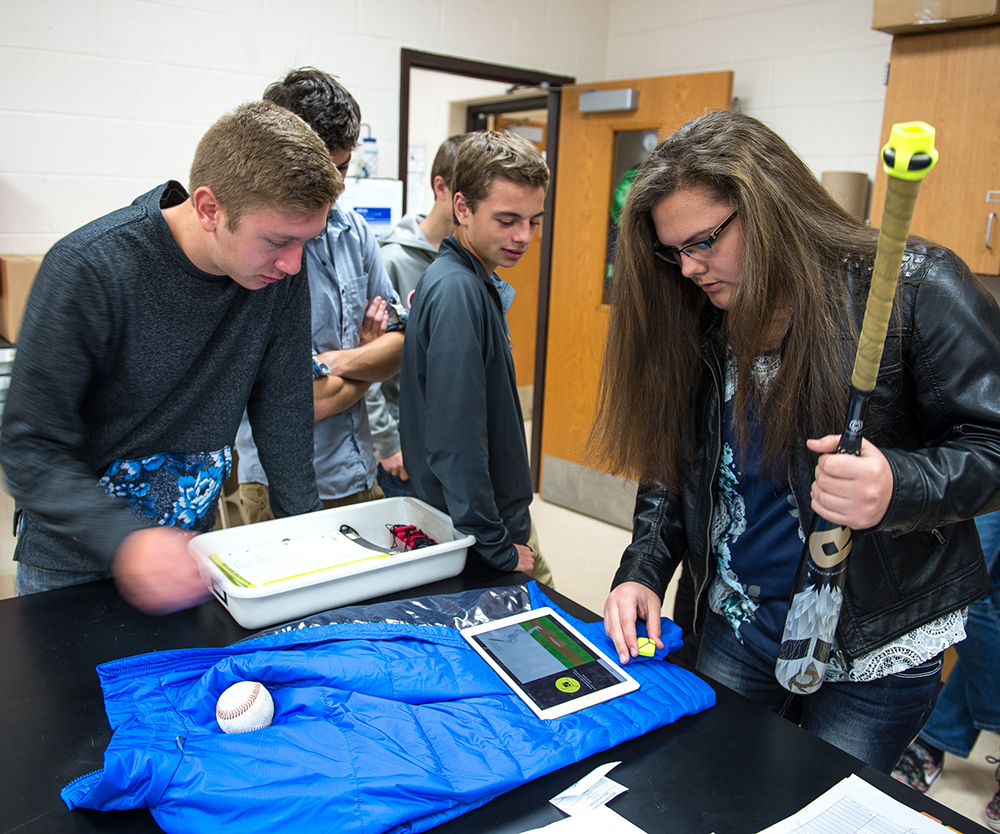 BAY CITY — Jarret Deming is a natural with a tennis racquet in his grip. But until recently, he never considered how it could empower him to better understand physics.

On a brisk morning — temperatures below 40 degrees — the 17-year-old junior at Bay City Western High School doesn’t appear fazed by the cold as he swings at the tennis ball. Deming is a natural, after all.

But this year he is getting a little help on his tennis posture and follow through. That support isn’t coming from a coach or a teammate or even a how-to video. It’s happening in Deming’s third hour physics class, where science, sports and technology are colliding thanks to a community partnership aimed at improving K-12 education in STEM (science, technology, engineering and math).

“I enjoy this more than sitting in a classroom and listening to a teacher talk,” said Deming, who spent class time mapping out and analyzing the physics of his tennis form.

The initiative is aimed at influencing 4,000 K-12 students within the Great Lakes Bay Region, which includes Saginaw, Bay City, Midland and Mt. Pleasant and surrounding areas. Funded by a $254,000 Dow Corning Foundation grant, the project connects teachers with SVSU faculty and Dow Corning officials as they work on ideas for stimulating student interest in STEM.

In summer 2014, Welch was among 12 teachers in the region selected as part of the inaugural group of participants. In summer 2015, Welch was one of 16 educators enrolled in the initiative. She and her colleagues participated in education seminars and interacted with STEM professionals.

That same group of Dow Corning Fellows plans to discuss how the program impacts their classroom during a symposium Tuesday, May 31, from 5 p.m. to 8:30 p.m. in SVSU’s Curtiss Hall banquet rooms. The event is free and open to the public.

Welch plans to share how Deming — and other students involved in her classroom’s sports physics research — benefit from the initiative.

Along with tennis balls, students in Welch’s third hour physics class are hitting baseballs and golf balls in the name of science in the name of sports physics research. With iPad technology purchased through the partnership, students are using computer software to produce 3-D maps of their peers simulating at-bats, tennis serves and golf ball chipping.

“I’m really interested to see what we learn from all this,” Welch said. “It’s great seeing the way students are reacting to this. They are getting a chance to see firsthand how the topics we are learning in class apply in the bigger picture of sports perfection.”

Welch said partnership has inspired her – and given her resources – to keep students engaged in STEM-geared learning.

Another benefit: “The network of people I’ve met, from SVSU and Dow Corning,” she said. “I’m not teaching in a small room anymore, on my own. I have a league of people who want to help me teach.”

Broker is impressed with how Welch has found new ways to engage students in STEM education.

“There’s so much more to science than just what you learn in the classroom,” Broker said. “Experiences such as these give students
such a broader perspective of what science is about.”

“This has been fun,” the 17-year-old says of the classroom assignment. “If it helps me understand the most efficient way to swing in tennis, then that’s even better.”