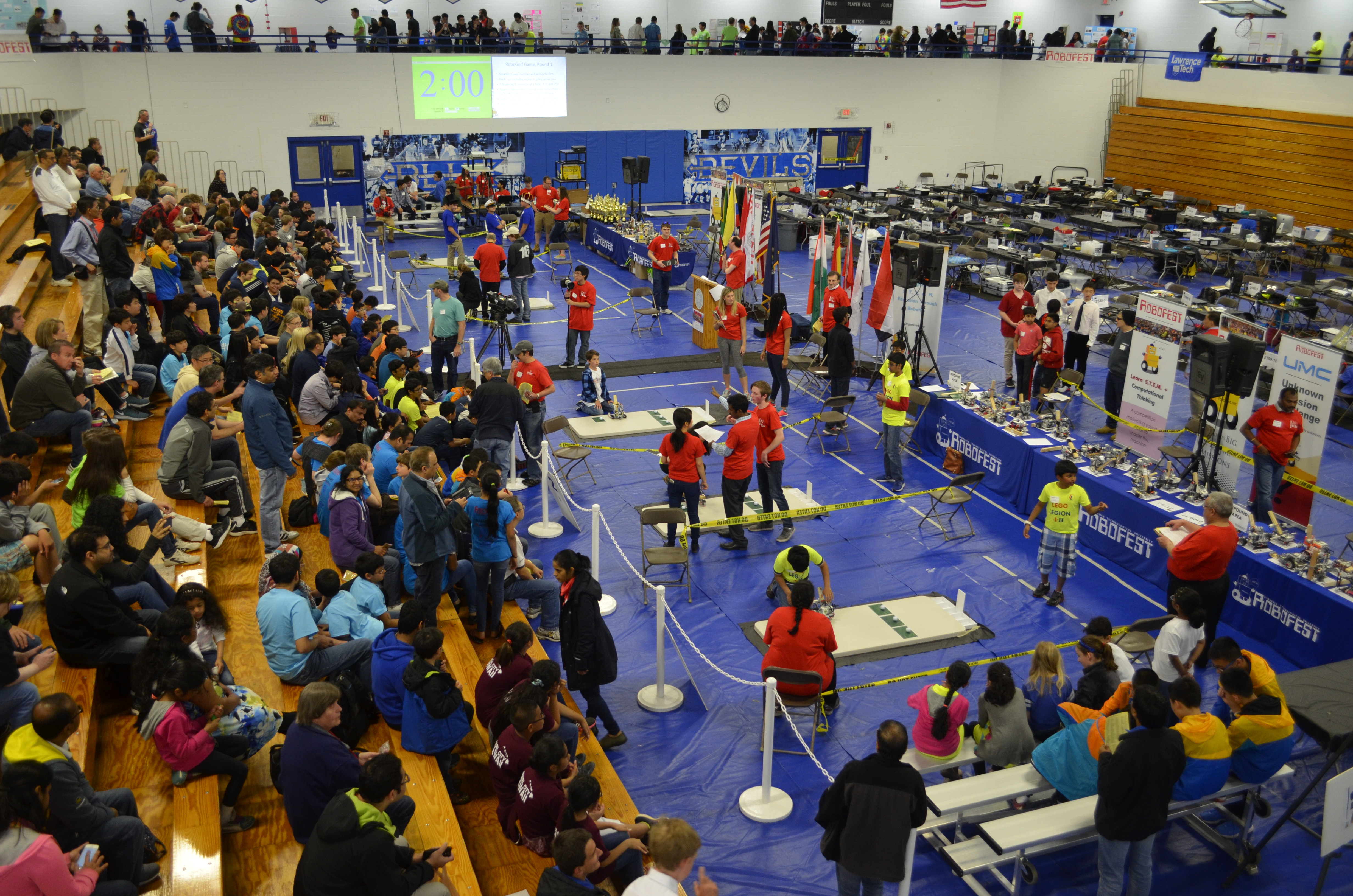 SOUTHFIELD – Nearly 500 students on 176 teams from 10 nations competed Friday and Saturday in the World Championships of Robofest, a worldwide youth robotics competition held since 1999 at Lawrence Technological University in Southfield.

In keeping with the international nature of the competition, teams winning top awards were from China, Colombia, Ghana, Korea, and the United States.

Robofest is unique in that competitors can use whatever type of robot they choose to complete a task – and they can even invent their own tasks. In the Exhibition category, students use their imaginations to design robots to accomplish a task they choose. In the Game category, robots compete to play a game successfully in the fastest time. The game changes each year to keep the competition fresh. There are also categories for machine-vision-controlled robots for advanced high school and college teams, and a “Bottle Sumo” division for beginners that has teams simply pushing a bottle off a table. There was even an “Unknown Mission Challenge” where team members weren’t told their task until the competition.

This year’s Game competition was RoboGolf. Robots had to be able to find the green on a golf course – actually, patches of green paper on a six-foot table – locate a golf ball on the green, and putt the ball into the hole. Each table had four “greens” in different positions and four golf balls. Teams were scored for how close they got to the hole on each shot, and how quickly they shot the four balls.

In the Junior Game category for grades 5-8, first place was taken by Team R&G 4, from Seoul, Korea. Second place went to Tek101, a team from Discovery Middle School in Canton Township. And third place went to RoboGals from Chasewood Learning Center in Aurora, Ill.

In the Senior Game category, for grades 9-12, first place went to Layin’ Brikz, a team from the Calhoun Area Career Center in Battle Creek. Second place went to Team R&G 2 from Seoul, Korea. And third place went to the Home School Connection team from Ann Arbor.

In the Vision Centric Challenge, first place in the senior category went to ICON 01 of Inchon, Korea, and in the collegiate category, to Luxrobo of Seoul, Korea.

Finally, People’s Choice Awards were given in the Exhibition category by spectators attending the event. Winners were Galactic Arcade of Welsh Hills School, Granville, Ohio; Spark, of Seoul, Korea; TechSisters of Canton Township; and Leaders, of Beijing, China.

Robofest was developed by CJ Chung, professor of mathematics and computer science at Lawrence Tech. More than 18,000 students around the world have participated in Robofest since then.

For the official list of world championship winners, visit www.robofest.net/rms/uploads/scoresheets/World_Championship2016/world16winners.pdf.  And for a video of the event, visit https://www.facebook.com/robofest.

Vaz and Chung also announced that next year’s Robofest World Championships will be held in the city of St. Pete Beach, Fla., a coastal city in the Tampa area.