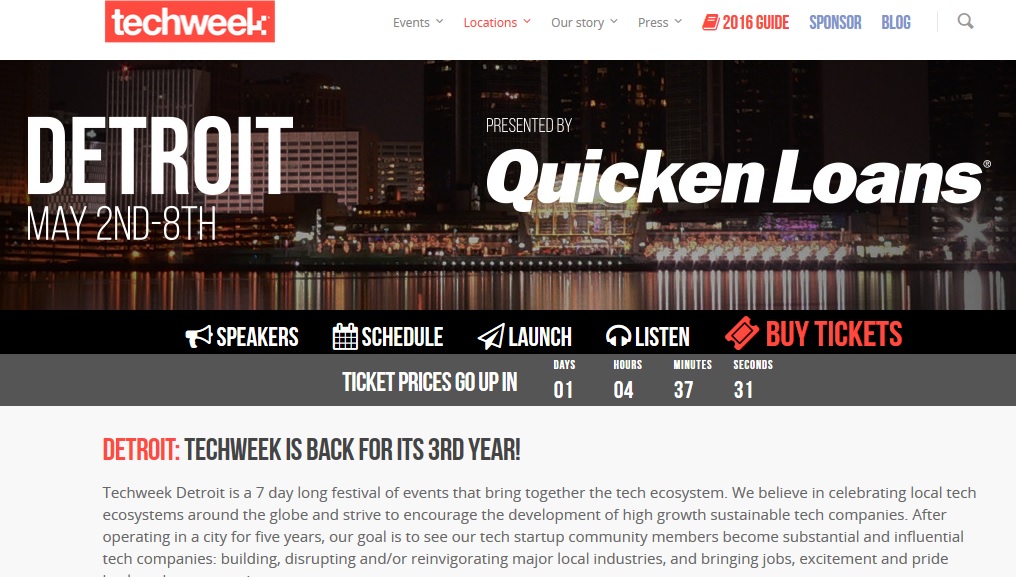 DETROIT — Out with the trade show, in with more speakers.

That’s the plan for the third annual Techweek Detroit, May 2-8 at various venues around the city.

Throughout the week, the conference will host numerous events including interactive workshops, a hackathon, startup pitch competition, networking events and educational speaker panels – all with the goal of helping local tech startups become substantial and influential companies, bringing jobs, excitement and pride to Detroit.

Organizers said that without a trade show, there will be more panels and speakers than years past, focusing on some of the biggest and most sensitive issues in the city today, such as diversity in tech, the evolution of automotive tech and the intersection of sports & technology.

* The Launch startup competition, with startups competing for potential investment and to be crowned Launch National Champion, Tuesday, May 3 at TechTown, 440 Burroughs in Detroit.

* A Hiring Fair, where candidates gain face-to-face access with companies looking to hire tech talent, Thursday, May 5 at 11 a.m. at TechTown

* A “Hack the Streets” Civic Hackathon, creating value for citizens through open source infrastructure, Saturday and Sunday, May 6 and 7, at various locations.

There are a wide variety of other presentations and panel discussions, featuring industry leaders such as Lyft’s Director of Product, Taggart Matthiesen, or Detroit’s Head of Innovation, Jill Ford. For a full schedule, visit https://techweekdetroit2016.sched.org/.

“Recent innovation from the automotive industry has jumpstarted the Detroit tech scene,” said Techweek CEO Amanda Signorelli. “The Motor City is seeing a resurgence in growth and investment in the tech field. If we can help raise awareness of all the great companies, influencers and entrepreneurs here in Detroit, then we know we have done our job.”

Techweek Detroit 2016 is one of eight conferences across the country, with other cities  Chicago, Toronto, Kansas City, Los Angeles, Miami, New York City, and Dallas. For more details about Techweek Detroit or other events throughout the country, visit www.techweek.com. The Detroit event is presented by Quicken Loans.