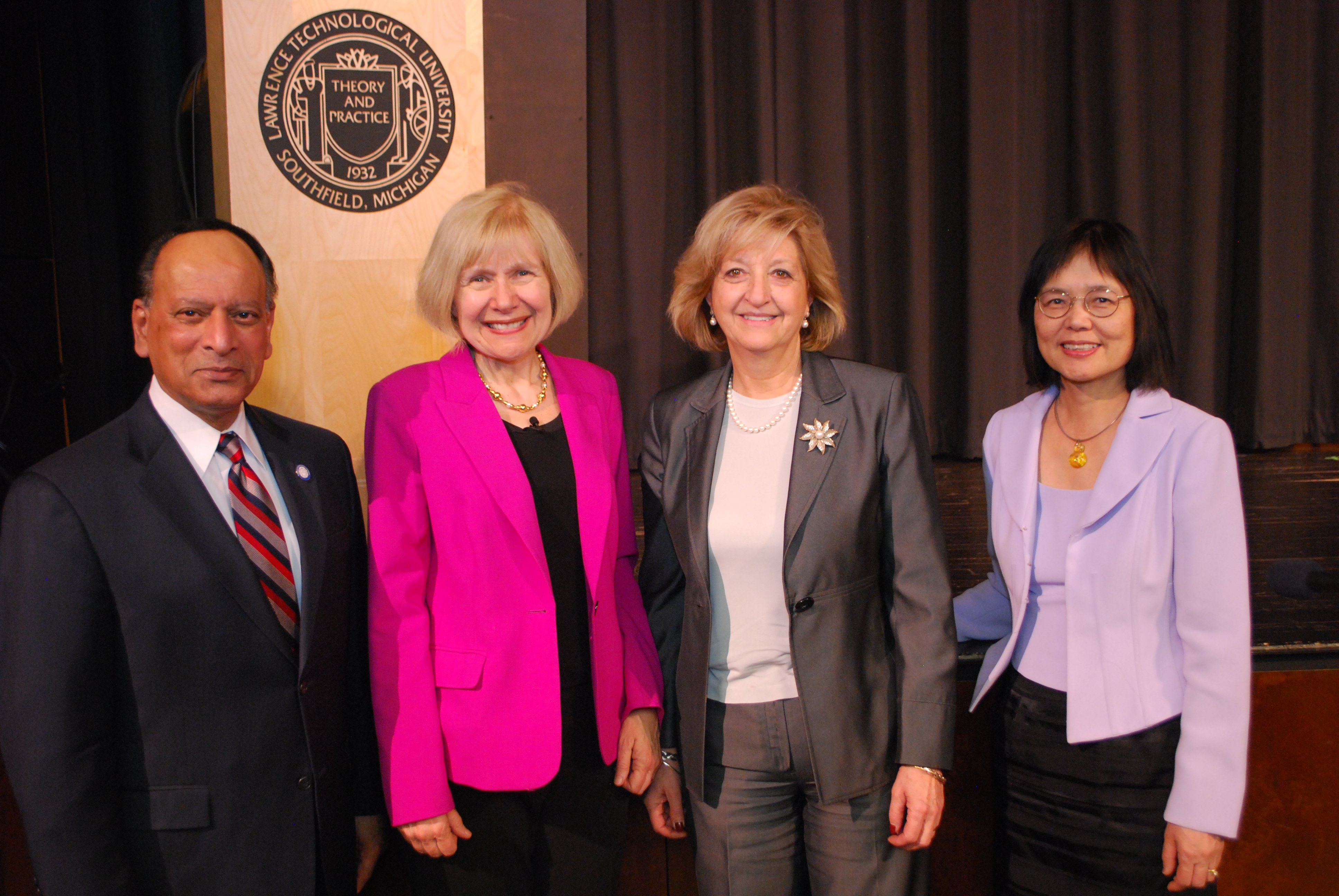 Stem cell treatments now in clinical trials offer the prospect of a treatment for one of humanity’s most dread neurological diseases, a Lawrence Technological University audience learned Tuesday night.

Feldman said ALS kills by destroying the body’s large motor neurons, so large muscles are no longer connected to the body’s nerves, and so they atrophy. Patients gradually lose motor skills and the ability to walk, and die when the muscles involved in breathing become disconnected. The average time from diagnosis to death is three years.

Earlier, treatment approaches focused on the method by which ALS might kill those neurons – but, Feldman said, since those processes are still poorly understood, she’s focused her research on repairing the damaged neurons. Stem cells, she said, hold the key – because these cells can form new neurons and strengthen existing damaged ones.

Feldman began her research with embryonic stem cells, those found in human blastocysts and five days’ gestation. The blastocysts are those used in fertility treatments that will be disposed of anyway, she said. Those blastocysts contain a few hundred undifferentiated stem cells that have the potential to form any cell in the body. Those cells were grown in the lab and injected into test rats with ALS. Some rats did very well in the experiments, but others did very poorly – because some of the undifferentiated stem cells grew into tumors. And in one unfortunate rat’s spinal cord, a tooth formed.

So, embryonic stem cells were out. Feldman’s team then turned to neural progenitor cells, a more mature form of stem cell found in 2- to 3-week-old embryos that grow only into nerve cells.

“We put those cells into rat spines, and what we saw was quite remarkable,” Feldman said. “Rat motor function and survival were improved.”

Next up was a study on large mammals – in this case, 130 pigs with ALS. They also showed a sharp improvement in ALS symptoms.

Once again, the results were promising, with most of the patients either improving in function or at least stabilizing. One exception was for patients with a form of the disease called bulbar ALS that involves the brain – they didn’t fare well and will not be given the treatment in the future, Feldman said.

A phase 3 clinical trial is now being designed, she said.

One thing’s for sure, the treatment is complex and will be expensive. It involves multiple major surgeries to inject the stem cells into the patient’s spinal column.

Feldman also pointed out that stem cells are being tested as treatments for cancer, Alzheimer’s disease, multiple sclerosis, Parkinson’s disease, Huntington’s disease, diabetes and spinal cord injury, with varying degrees of promise. “Keep your fingers crossed,” she told the audience.

Feldman and LTU dedicated the 2016 Cisler lecture to Feldman’s benefactor, shopping center magnate A. Alfred Taubman, who attended LTU before beginning his storied career, and who returned to LTU after his retirement to teach a business course. Feldman joked that after his experience at LTU, Taubman told her, “call me Professor.”

LTU president Virinder Moudgil noted that Taubman gave away more than $250 million of his fortune to charity – including numerous medical buildings at UM and several major campus buildings at LTU. (Pictured above are Moudgil, Feldman, LTU dean Maria Vaz, and Hsiao-Ping Moore, dean of the LTU College of Arts and Sciences.)

The lecture is named after Walker L. Cisler through a grant from the Holley Foundation, where Cisler served on the board for many years. Cisler, 1897-1994, was a prominent American engineer, business executive, and founding member of the National Academy of Engineering. After serving as chief of public utilities for the U.S. Armed Forces after World War II, supervising rebuilding power plants in Europe, Cisler served Detroit Edison in a variety of positions, including chief engineer, executive vice president, president, CEO, and board chairman, from 1954 to 1971.

At UM, Feldman is Russell N. DeJong Professor of Neurology, Director of the ALS Clinic, Director of the JDRF Center for the Study of Complications in Diabetes, Director of the Program for Neurology Research and Discovery, and Director of the A. Alfred Taubman Medical Research Institute. Feldman completed both her medical degree and PhD in neuroscience at UM. She completed a residency in neurology at Johns Hopkins University, and a neuromuscular fellowship at UM.

In addition to running an active clinical practice at UM, Feldman directs a team of 30 scientists who collaborate to understand and find new treatments for a wide variety of neurological diseases, including ALS, diabetic neuropathy, Alzheimer’s disease, and muscular dystrophies. She is the author of more than 220 articles, 50 book chapters, and two books. She is the Principal Investigator of four major National Institutes of Health research grants, three private foundation grants, and five clinical trials focused on understanding and treating neurological disorders, with an emphasis on ALS and diabetic neuropathy.