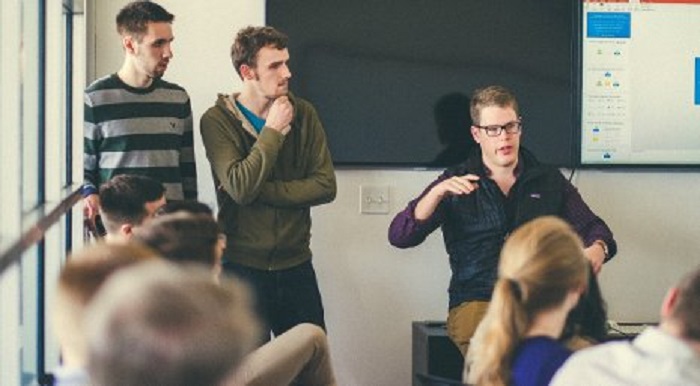 HOUGHTON — Eighteen months ago, Garrett Lord was studying computer science at Michigan Technological University and trying to find an internship in Silicon Valley. He wasn’t having much luck. Silicon Valley companies didn’t tend to look for interns at a small, engineering-centric school on the Upper Peninsula of Michigan. Yet he knew that students at big-name schools nationwide had no trouble finding those opportunities.

What could level the playing field? The answer was a Handshake away.

Lord and fellow Michigan Tech students Scott Ringwelski and Ben Christensen designed a new college-career network called Handshake, a software program that makes it easy for students to find and apply for internships and jobs, enables employers of all sizes to locate the talent they’re looking for and helps college career centers do their job.

They started going to career fairs and talking to students. That’s when Christensen — now Handshake’s product manager — became convinced that they were onto something big.  “College students are smart, knowledgeable people who were struggling to find a job that was a perfect fit,” he said.

Like so many start-ups, the young entrepreneurs developed Handshake in the shabby confines of an old rental house near the Michigan Tech campus.  They piled into a rusty Ford Focus and drove 40,000 miles, talking up their product and looking for their first client.

From Houghton to Silicon Valley

But unlike many other start-ups, theirs was an idea that clicked. Handshake has since moved to Silicon Valley, grown from three to 30 employees and just received $10.5 million in venture capital funding. Sixty universities and 40,000 companies are using the career-finder app, and Lord’s goal is to have 180 or more schools and 75,000 employers on board in the next six months.

Not that it was easy. “It’s incredibly hard to build a company,” said Lord, at right in the photo above. “It’s the hardest thing I’ve ever done. There wasn’t a single month during the first year that one of us didn’t get sick from not sleeping.”

Ringwelski, Handshake’s chief technical officer (at left in photo above), agreed: “It’s a whole new world to build something on this scale. You have to think about security and usability, so many issues. You can learn those things in school, but doing them in the real world is something else.”

But Lord and his co-founders are young men on a mission. Said Ringwelski explains: “Getting your first job or your first internship is a really big deal. We want to help make that painless.”

Success has not been a straight upward trajectory. “The highs are really high, and the lows are really low,” saif Christensen, Handshake’s product manager, and center in the photo above. “You start to think, ‘How is this ever going to work.’ But when we hear individual feedback from students, stories of students who are getting opportunities they wouldn’t have gotten otherwise, that’s when it gets exciting. There’s no feeling like it.”

Michigan Tech Career Services jumped on the Handshake bandwagon last June.  They replaced their old job placement software — which neither students, employers or Career Services staff liked much — with Handshake, and when students returned for the fall 2015 semester, every student got a free Handshake account.

Since then, 1,960 companies have posted 6,695 jobs, an exponential increase over the old system. Currently, there are 1,756 open jobs posted on Handshake. Nearly 4,700 students have used the new app.

On the program, students can track industries or individual employers, see internships and jobs available, even apply for them.

First they have to build a profile. Michigan Tech itself populates each student’s account with basic information such as major, minor and grade point average, but the students can add all kinds of details, such as industries that interest them, locations they might like to work, specific focuses within their major, Enterprise or Senior Design experiences.

Jim Desrochers, associate director for employer relations in Career Services, compared Handshake to an online dating site: “You have to tell it enough about you for it to be smart about what you might like.”

“I like the fact that Handshake is simple to navigate,” said Matthew Rennell, a fourth year mechanical engineering student. “Handshake allows me to select between a number of filters to make it easier for me to find the position I am looking for with the criteria that I desire.”