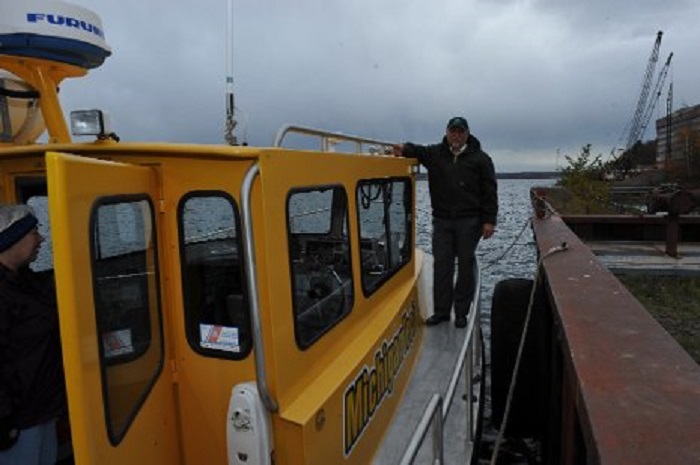 HOUGHTON — The northern Great Lakes are praised for being clean, but these aquatic systems don’t exist in a vacuum. Contaminants still find their way into lake water and sediments. Mercury is of particular interest because of its toxicity and persistence.

In a new study published in the Journal of Great Lakes Research in February, an interdisciplinary team from Michigan Technological University examined the legacy of mercury in Lake Superior.

Currently, the National Atmospheric Deposition Program reports low levels of mercury deposition across most of the upper Midwest. However, those figures don’t account for past mercury deposition and what that might mean for heavy metal contamination. In fact, when mining was booming around the lake in Michigan, Minnesota and Canada in the 1800s and early 1900s, the researchers found mercury input was higher than expected.

“We document that the mining effort was discharging mercury at 1,000 times the normal deposition rate in the region,” said W. Charles Kerfoot, professor of biology and director of the Lake Superior Ecosystem Research Center at Michigan Tech. “We set out to quantify this deposition — and it was a real wake-up call.”

Kerfoot collaborated with Noel Urban, a professor of civil and environmental engineering and director of the Center for Water and Society at Michigan Tech. Together they dug into mine tailings buried at the bottom of local waterways near campus to start piecing together the region’s mercurial history.

Booms and busts rocked not just the area’s economy, but also heavy metal contamination. Naturally, some metals — including mercury — make their way into water bodies. Mining speeds up that process, and the more mining, smelting and processing taking place, then the more heavy metals get deposited. In the Keweenaw Waterway and Torch Lake, lakebed sediments record these mercury-rich layers in lighter bands.

Because of the unique environment of the Keweenaw Peninsula, the team was able to quantify two kinds of mercury in these layers.

“That’s normally difficult to do,” Urban explains. “But here, we can show that the amount of mercury in the environment due to local activities is huge compared to the amount coming from other sources, like regional coal power plants.”

Urban, Kerfoot and their team gathered dozens of 5-centimeter diameter core samples by boat, then lugged them back to the lab for analysis. That’s where Kerfoot and Urban uncovered some of the “lingering effects” from mercury deposits.

Mercury as an inorganic metal is not as toxic as its organic form, methyl mercury, which is formed by bacteria. The organic form is bioavailable — meaning it is readily taken up and stored in organisms — and tends to accumulate up the food chain. A little plankton feeds an invertebrate that feeds a fish and then another fish. By the time a person eats that fish, the methyl mercury has accumulated every smidge from every plankton and fish into a sizable dose of heavy metals. Because of bioaccumulation, there are guidelines on how much fish is safe to consume.

“For each core, you need to know the concentration of the total inorganic mercury, and then you need to know how much time it took to be deposited,” Kerfoot said. Once that data is compiled, it’s compared to a similar set of data for methyl mercury. In this case, as the team writes in their paper, the results “reveal that methylation occurred at the time of mining operations and shortly afterwards, with an apparent time lag of 20 to 40 years.”

The question remains why the lag is there, and there are several possible explanations. The delay could be from the time it takes the watershed to move mercury back into surface waters. Following clear-cutting and other landscape-scale changes, forest and wetland regrowth could have played a part in remobilizing mercury. On a smaller scale, the microbes living in sediments needed time to recover from copper toxicity before being abundant enough to methylate mercury.

To better understand the time lag, and connect local activities to regional impacts, the next step of the research is to scale up. Kerfoot points out that the research in the Keweenaw gives researchers a baseline to start comparing additional sites around the lake.

The work can also affect how remediation is done with mercury contamination. At the very least, knowing how much mercury is present in the environment changes the conversation about how to deal with heavy metal contaminants in the Lake Superior region.