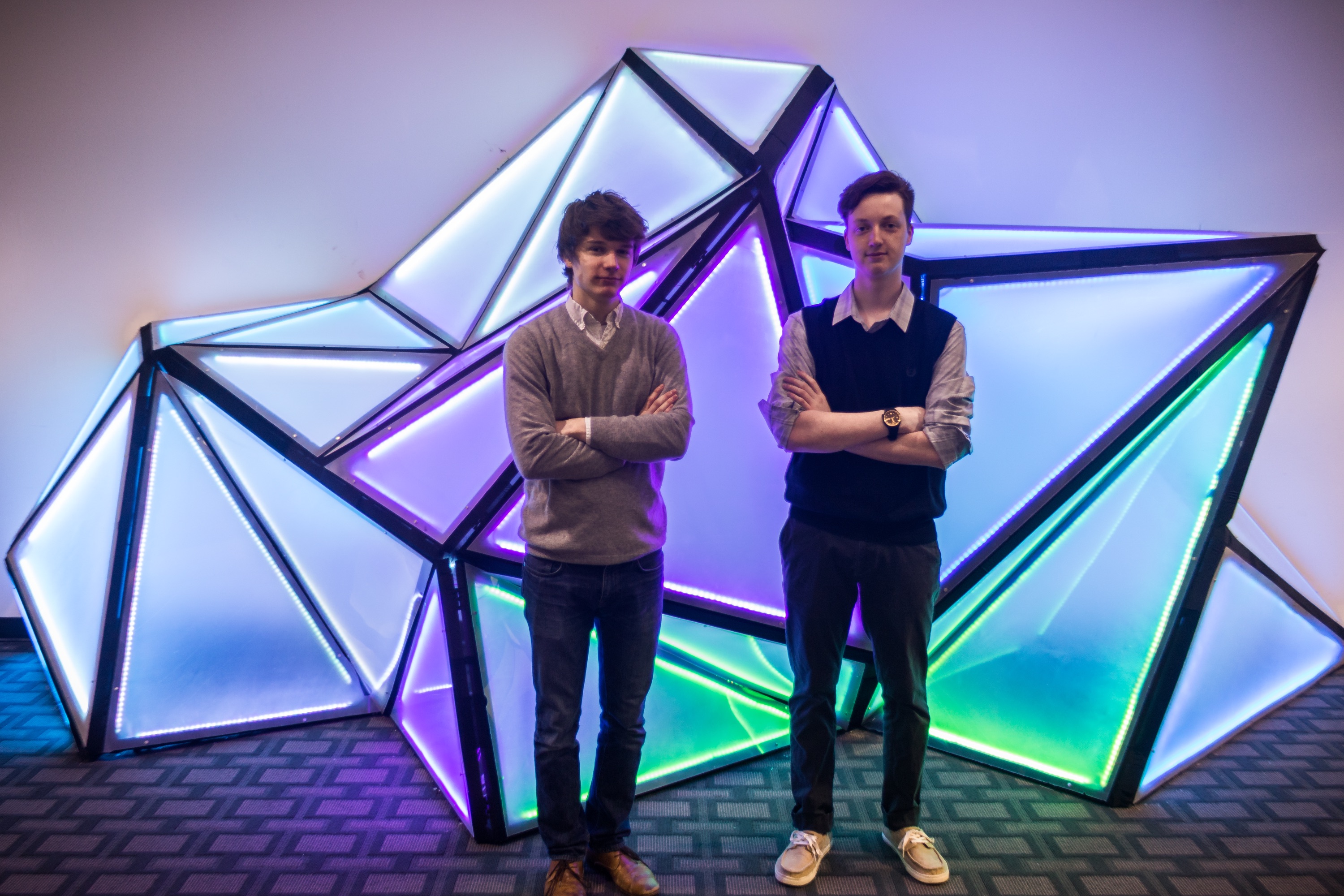 The 20-foot-long, 7-foot-tall sculpture, called “Hedron,” is a series of triangular Plexiglas sections held in place by wood framing.

As a statement of sustainability, the lights are power-saving LEDs, and the wood framing was recycled from another sculpture. The LEDs change color to add dynamic motion to the art.

“The idea was to take the simple geometric form and make an organic composition through repetition and distortion,” said one of the sculpture’s designers, Daniel Stack, a junior graphic design major from Farmington Hills.

Added the other designer, Alek Cummings, a junior graphic design major from White Lake: “As for the inspiration, I’d say it’s inspired by the ‘80s … wild geometry and colors, but still pretty modern. It’s kind of just to inspire happiness.”

Cummings added that he hopes the sculpture helps those who work at Town Center “forget about stress” at their jobs.

Lucas, in turn, contacted Steven Coy, associate professor in LTU’s College of Architecture and Design, who teaches a sculpture class each fall, and Coy’s students got busy.

The result is two public art installations with a third coming soon.

Besides the glowing art in Town Center, Coy’s students also created a set of hanging stainless steel orbs, pictured below, for the lobby of Arbor Lofts, a refurbished office building on Civic Center Drive that’s now home to apartments, many of which are rented by students from nearby LTU.

And soon, they’ll be working on a new art installation in an office and retail building on Evergreen Road, just north of 10 Mile Road.

“This is the first major public installation of its kind for LTU in this area, and hopefully the first of many more to come,” Lucas said. “It’s part of the college town atmosphere we’re trying to build and maintain in Southfield.”

Financial support from the project was provided by the Southfield City Centre as part of their efforts to create a vibrant mixed-use environment in the City Centre district. The Southfield Public Arts Commission also assisted in implementation and will ensure proper future maintenance of the art.

Kimberly Heslep, senior property manager for Town Center owner Transwestern, said the art is an example of the company being “a  firm believer in supporting the community.”

Lawrence Technological University, www.ltu.edu, is a private university founded in 1932 that offers more than 100 programs through the doctoral level in Colleges of Architecture and Design, Arts and Sciences, Engineering, and Management. The Brookings Institution ranks Lawrence Tech fifth nationwide for boosting graduates’ earning power, PayScale lists it in the nation’s top 10 percent of universities for graduates’ salaries, and U.S. News and World Report places it in the top tier of best Midwestern universities. Students benefit from small class sizes and a real-world, hands-on, “theory and practice” education with an emphasis on leadership. Activities on Lawrence Tech’s 107-acre campus in Southfield include more than 60 student organizations and NAIA varsity sports.