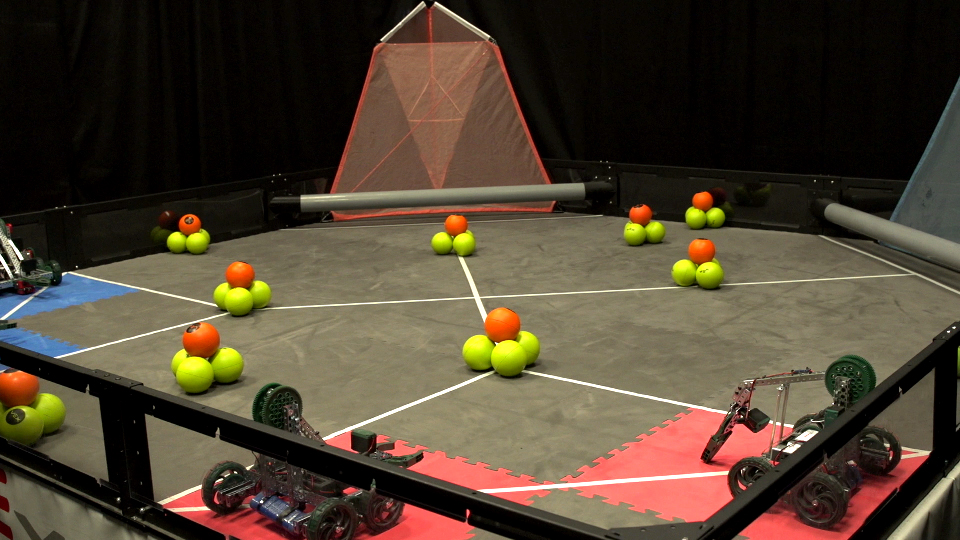 Seventy-four teams, including 48 high school and 26 middle school teams, will compete at the state games from 9 a.m. to 5 p.m. The young robotics masters will challenge each other for top state honors and the right to represent Michigan in the 2016 VEX Robotics World Games in Louisville, Ky., April 20-23.

Teams will travel from across Michigan to compete at the state tournament. Fifteen high school and six middle school teams will qualify for the world championship.

“VEX Robotics challenges our state’s youngest aspiring engineers and designers, and draws them into science, technology, engineering and mathematics in fun, interesting, and competitive ways,” said Drew Kim, assistant to the dean for recruitment, scholarship and K-12 outreach in MSU’s College of Engineering. “The tournaments around Michigan, and the championship games here at MSU, have a tremendous impact on recruiting future engineers by encouraging and recognizing their talents in the technical fields.”

Kim said the VEX games are a family-oriented event that are free and open to the public. Elimination rounds run from 2-5 p.m., with awards handed out at approximately 5 p.m.

This year’s game, “Nothing But Net,” is played by two competing alliances of two teams each on a 12-foot by 12-foot square field. Teams score goals by shooting rubber foam balls into low and high baskets, and can score additional points by elevating their robots in a climbing zone at the end of the match. Matches include both autonomous play by the robots and almost two minutes of driver-controlled action.
http://www.vexrobotics.com/vexedr/competition/competition-resources)

“This year’s game is quite different than from the past,” said Bob Watson, K-12 outreach/robotics coordinator for MSU’s College of Engineering. “They are shooting foam rubber balls, so teams have to learn about flywheel rpms and moving devices.”

Watson noted that because students compete in multiple tournaments, they learn to integrate changes and improve their troubleshooting skills.

“This year’s game is very creative, but there is lots of teamwork needed, too,” Watson added. “I know it’ll be a lot of fun.”

Michigan State University was the first in the national to host a VEX state championship tournament, with state finals starting in Michigan four years ago.

MSU is the largest university sponsor of VEX Robotics in Michigan with 30 teams around the state, many of them from underrepresented schools.

A large corps of more than 130 volunteers, many of them MSU engineering students, help VEX team members learn the principles of engineering as they design and build their robots for competition.