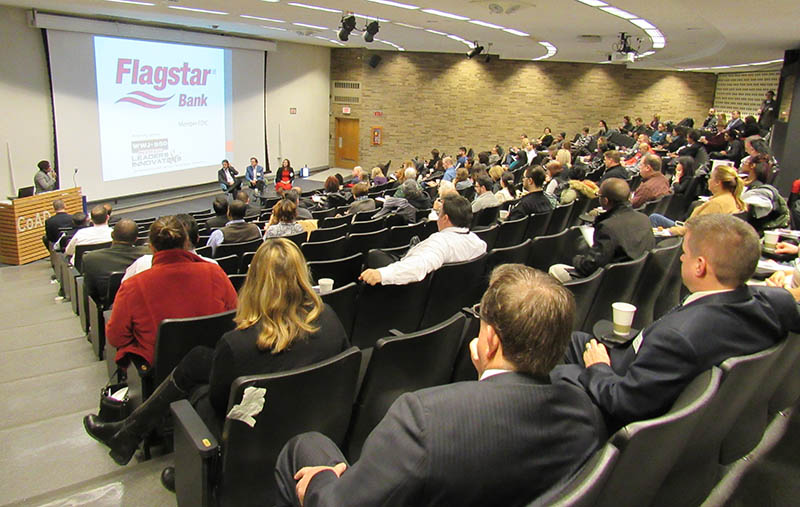 SOUTHFIELD — You will negotiate today, whether you think you will or not.

And a panel discussion Thursday morning at Lawrence Technological University offered solid, concrete tips on being a better negotiator in a program hosted by WWJ Newsradio 950 and sponsored by Flagstar Bank.

LTU Professor Karen Evans, pre-law adviser and co-director of the university’s Coleman Entrepreneurial Faculty Fellows Program, advised negotiators not to put all their cards on the table when starting negotiations.

“Know your goal, but don’t start out with your goal,” she said. “Don’t say exactly what you want, exactly the number you want to settle for. Don’t put everything on the table in negotiating. Give yourself room to back down.”

Lawrence Levy, founder and CEO of Levy & Associates Tax Consultants, said it’s important to understand what the other side can and cannot do — giving as an example his negotiation of a $250,000 tax liability down to $22,000 for a struggling restauranteur.

He also said how tough you can be in negotiations frequently depends on how badly you need the object in question. And he said polite and professional negotiators are generally responded to in kind — but that you can’t be afraid to “go from zero to 100 in about three seconds” on the toughness scale if the other side does.

Panelist Dave Zilko, former vice chairman of Garden Fresh Gourmet, said his key to negotiating with Garden Fresh was to come to the table with a competitive advantage.

“Negotiating with customers is not a zero sum game,” he said. “We tried to look long term and build a strategic partnership.”

Zilko pointed to a Woody Allen quote, “80 percent of success is just showing up.” He said the strategy at Garden Fresh was “to build a company Woody Allen would be proud of,” a company where all the sales staff had to do was just show up, not sell. And he said the company did that through “many strategic advantages that your competitors cannot match.” That way, he said, the sales staff is “not selling, they’re just having a conversation.”

The panelists also stressed the importance of face-to-face communication, and that eye contact and strong hand gestures are important.

Levy also recommended a tactic in contentious negotiations of offering the other party a free course at a charm school. And he said some people are simply not well-suited to learning the art of negotiating.

Evans also advised negotiators to learn the professional language and organizational details of the other party to increase credibility and influence.

Zilko also said Garden Fresh Gourmet turned down an offer from Nestle before selling for $231 million last year to Campbell Soup Co., which pledged to keep production in Michigan (and which, in fact, plans to expand Garden Fresh’s Ferndale plant).

Panel moderator Murray Feldman, reporter on WWJ Newsradio 950 and news anchor at Fox 2 Detroit TV, also recommended a book called “Think Like A Negotiator” by Eldonna Lewis Fernandez. And he said one tactic from the book he liked was to ask the other party, “What part of my proposal gives you the most concern?”

And Zilko recommended his own book, “Irrational Persistence: Seven Secrets That Turned a Bankrupt Startup Into a $231 Million Business,” due out in April.