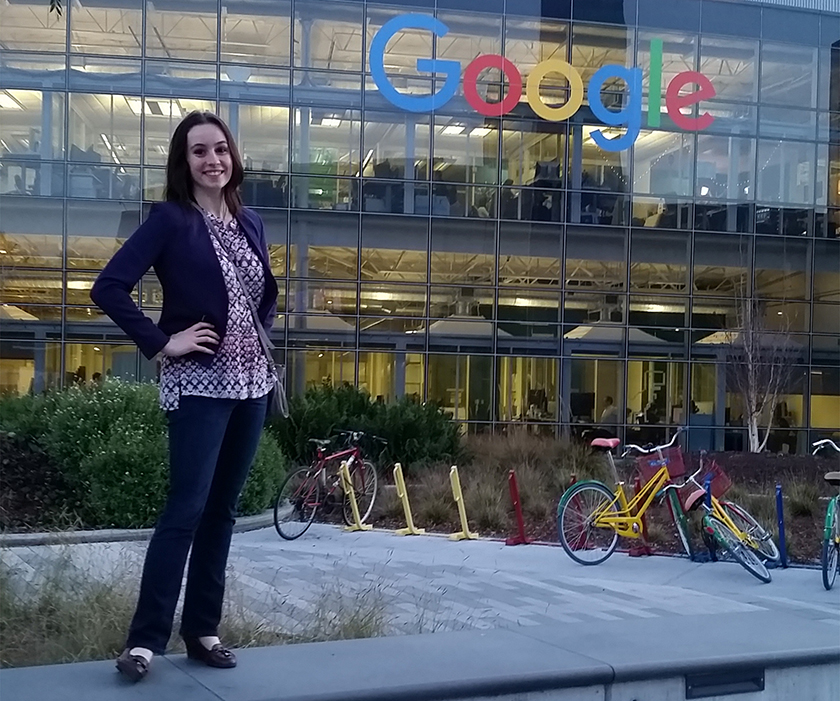 When Google wanted to explore how to ignite more interest in computer science among women students, they tapped a Michigan State University College of Engineering senior, partly because Acker has been actively involved in MSU’s IgniteCS program to introduce computer science to young minds, but also because she is among the many current students who started in computer science and changed her major.

Acker will graduate in December with a degree in mechanical engineering and a minor in computer science. An internship at Whirlpool in Benton Harbor, Mich., last summer confirmed that her academic choices are a good fit for her — “Whirlpool was a blast,” she said.

She’ll spend this summer working at iRobot in Boston.

“I’m deciding on whether to focus on robotics or advanced product development.  I think an internship at iRobot will help me decide,” she said.

Acker was among the 15 students from across the United States who spent Jan. 14-15 at Google’s Mountain View, Calif., headquarters brainstorming in a “retention think tank” seminar. A half dozen professors and four Google employees also participated.

“It was an amazing meeting,” Acker said. “The faculty were awesome, and I got to meet students from all over the country, including some really small schools.”

The meeting was a combination of support and enrichment, she explained.

Acker said they focused on ‘why the drop?’ and came up with five big points:
• introductory classes need to showcase more than just programming;
• the field needs more mentors;
• more attention needs to be focused on exclusion issues (“it’s mostly men gamers”);
• universities need to embrace the surging changes in the field; and
• teachers/faculty need to engage with students, rather than lecture to them.

“We talked about creating a semester-long event that would attract majors from across the university to explore computer science. Teams would meet with faculty guides to create a prototype presentation. The cross-discipline idea would feature more than just programming, and perhaps could attract students who might not ever consider computer science,” she said.

Acker said she will spend time this semester helping MSU continue its IgniteCS efforts in the Lansing area. This semester’s work will focus on Lansing Eastern, East Lansing and Okemos high schools.

“I’ll work as a mentor. After my Google experience, I have a new appreciation for the student side of this,” she said.

Encouraging women in computing at MSU

It almost takes a computer program to keep up with MSU’s efforts to recruit and retain girls and women in computer science.

Female majors in computer science at MSU have steadily increased from 7 percent in 2008 to the current 15 percent, said Laura Dillon, professor of computer science and engineering, and one of the college’s leading advocates.

MSU is active with the National Center for Women and Information Technology (NCWIT), a non-profit community of more than 600 universities, companies, non-profits, and government organizations nationwide working to increase women’s participation in computing and technology.

Dillon said MSU was one of only 10 universities in the country to receive a 2015 NCWIT Student Seed Fund Award – which MSU used to host a tech workshop for female students in grades 6-8 at the Lansing STEM Academy.

In 2016, MSU joined Michigan Technological University, and the University of Michigan in NCWIT’s Pacesetters program. The two-year effort will develop aggressive and measurable goals for increasing the number of women in the U.S. computing and technology workforce.

“MSU and the college have a number of other initiatives,” Dillon explained.

MSU joined forces with Google in January to amp up computer science in schools. More than 400 students and teachers from across the state huddled around iPads and other computer devices inside the Breslin Center to launch a new partnership and get youth interested in evolving technology early.

The college’s list of recruiting and retention efforts also includes local activities like 2020 Girls Clubs at Lansing area schools and IgniteCS events, statewide – Aspirations in Computing awards, programming competitions, and Women in Computing workshops, and nationally – sending dozens of current MSU students to the annual Grace Hopper Celebration of Women in Computing conference to meet fellow students and leaders in computing and information technology from around the world, and internationally – teaching residential technology camps for secondary-school girls in Rwanda and their ICT teachers.

The college supports active Women in Computing and Women in Engineering programs, too.

“It’s thrilling to see females who we’ve encouraged join the next wave of innovators,” Dillon said. “Getting to know them, and being part of their academic and professional development is one of the rewards of these efforts.”