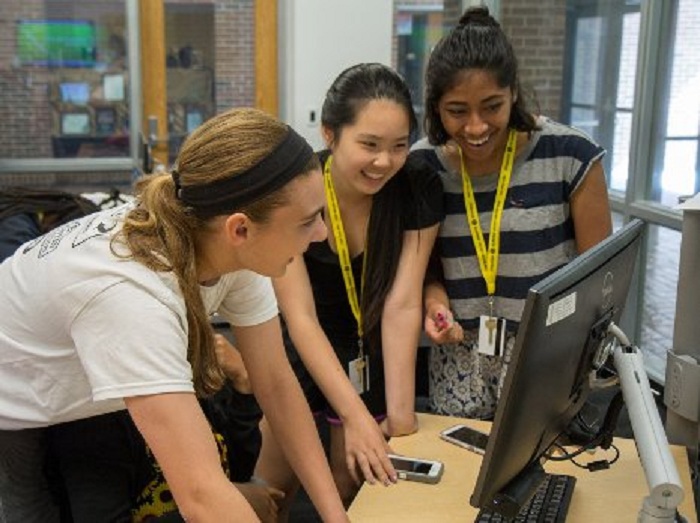 Pacesetters is a 2-year program under which participating institutions develop aggressive and measurable goals for increasing the number of women in the American computing and technology workforce.

Michigan currently has more than 16,000 job openings in computing, according to code.org, a nonprofit founded to improve access to computer science for women and underrepresented minorities.

With three universities chosen and a community college partnership, Michigan is one of the three best-represented states in Pacesetters.

This is the second Pacesetters grant that Michigan Tech has received.

“We had been selected for the 2013 cohort, and the decision to apply again was a simple one,” said Linda Ott, professor of computer science and associate dean of special initiatives in Michigan Tech’s College of Sciences and Arts. “Although we’ve made progress, we still have a long way to go.”

Ott, former chair of computer science, has been the driving force in getting Michigan Tech Pacesetters grants from the NCWIT.

“We had percentages of female students in the single digits for decades,” Ott said, referring to the number of female computer science majors. “We set a goal to double it, and we hit that goal this fall.”

NCWIT introduced a new two-track program this year to distinguish organizations new to the program from those that have participated before.

This year’s grants went to 42 organizations nationwide, including MTU, UM and MSU. Tech is the only one from Michigan that has participated before, although Michigan State and UM have been active in NCWIT’s Academic Alliance and Extension Services for Undergraduate Programs.

Michigan Tech will expand on the successful outreach programs that were developed during the initial Pacesetters project. Tech also plans to encourage alumnae across Michigan to support local outreach programs in an effort to broaden the impact statewide.

“A big advantage of being a part of this program is the opportunity to work with others, sharing ideas and support,” Ott said. “With a larger infrastructure, we can make an impact. To recruit more women to computing science, we need to work on a global level. So many girls are not exposed to computer science, programming and that type of problem solving in high school, and they don’t realize they might like it.”

Michigan Tech has been working to improve that pre-college experience. The University’s Summer Youth Programs offers a week-long Women in Computer Science session that introduces pre-college women to the computing sciences. During the school year, Tech hosts outreach programs in the local schools, such as Women in Computing Day.

“Attending WICS made me think more about computer science as a degree, and it made me sure that that was what I wanted to do,” said Emily Morningstar, who attended WICS in 2014 and is now a first-year student in computer science at Michigan Tech. “My advice for pre-college women interested in computer science is that you can do programming. Some people might tell you that you can’t or that it’s not something girls can do, but if it’s what you want to do, you should do it.”

Along with the support from NCWIT, the effort to attract more women to computer science has been possible with the support of many different departments on campus, including Career Services, Admissions, Summer Youth Programs and Enrollment, Marketing, and Communications.
“It has taken a broad base of support to be successful,” Ott said. “It means people are realizing the importance of this.”

NCWIT has also supported broad-based programs to improve recruitment and retention of female engineering students at MSU in multiple grants over the last seven years and through the Extension Services for Undergraduate Programs. Female majors in computer science at MSU have steadily increased from 7 percent in 2008 to the current 13 percent. On the strength of these programs, MSU was awarded a 2015 NCWIT Extension Services Transformation Award.

In its Pacesetters program, Michigan State is partnering with Lansing Community College to increase recruitment and retention of women, first-generation students and students of color in computer science, said Laura Dillon, professor of computer science and engineering at MSU. The partnership will use courses at the community college to provide affordable introductory programming experiences for at-risk students enrolled at Michigan State. Pacesetters will also reach out to K-12 guidance counselors to help broaden the diversity of the computing workforce, Dillon said.

“To be competitive in tomorrow’s economy, Michigan needs the talents and contributions of a more diverse workforce skilled in how to create — not just use — technology,” Dillon said. “This MSU-LCC Pacesetter partnership is a great opportunity to better support and prepare diverse students, many of whom lack opportunity in K-12, for the rigors of the computer science major at MSU. And getting the message about computing to K-12 administrators and guidance counselors is critical to solving the pipeline problem.”

There is a high level of enthusiasm at the University of Michigan for the Pacesetters program.

“In my view, Pacesetters is a great way for academic institutions to collaborate and arrive at an aggressive plan to accomplish a 50/50 (female/male) representation in computer science within four years,” said Mary Lou Dorf, a lecturer in computer science at UM. “Female computer science majors at UM have increased from 12 to 18 percent in the last five years, even as the overall number of CS majors has more than doubled to over 1,000. I believe that with a continued focus on this issue, we can achieve 50-50 representation.”

In addition to building a K-12 pipeline, higher education institutions must make the structural changes necessary to transform CS programs into more welcoming environments, Dorf says. At UM, events have been designed to showcase the potential for impact in CS, and courses have been redesigned with an across-the-board focus on inclusiveness and teamwork. Student groups exist for both undergraduate and graduate women, and the department sponsors participation in conferences and associations dedicated to equity in computing.

“Our goal is to embody a spirit of inclusiveness that will attract a broad and growing array of students into computer science, while at the same time providing support for women and other underrepresented groups in order to help them access these programs,” Dorf said.