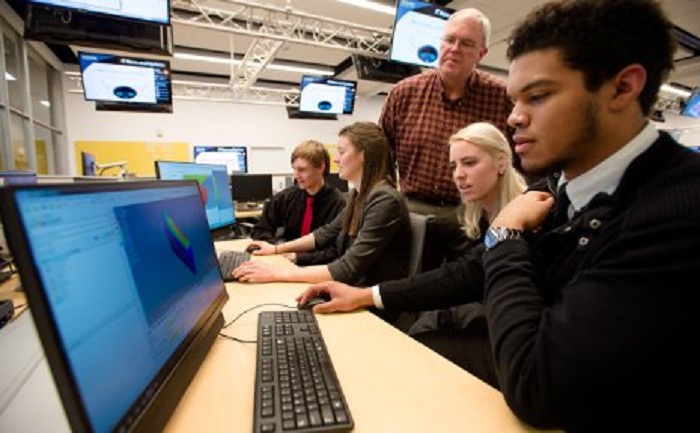 HOUGHTON — There’s a new way of doing mechanical engineering, and Michigan Technological University is taking steps to make sure that their students come out of school skilled at using the new technology.

HyperWorks modeling and simulation software, developed by Troy-based Altair Engineering, is delivering a new class of design tools for tomorrow’s engineer. And Michigan Tech is one of the first engineering schools to incorporate this commercial suite of computer-aided engineering software into its entire mechanical engineering curriculum.

The software enables engineers to do simulation-driven design, which takes the place of prototyping, testing and prototyping again.

“It’s faster and cheaper,” said Associate Professor Chuck Van Karsen, pictured above teaching students about the new Altair software. “Students are learning to make better decisions without as much guesswork.”

Now, instead of guessing what their engineering project should look like, building it, testing it to see what doesn’t work, going back and building it again, engineers — and Tech engineering students — are sitting down to their computers, where they enter the parameters, and the software does the complicated math and physics for them, generating a colorful, three-D model that they can virtually test, explore, and alter, over and over.

“We can evaluate hundreds of design variations through optimization to improve passenger safety without having to do hundreds of physical [vehicle] crashes,” Chouinard said. “We can build and run a virtual model in 24 hours that would take months to build and test physically.”

Michigan Tech has a lot of ties to Altair. Chouinard, the company’s chief operating officer, serves on the ME-EM Advisory Board. Another alumnus, Michael Heskitt, is one of Altair’s chief technical officers, while another alumnus, Erik Larson, is an applications engineer and training manager.

Bill Predebon, chair of Michigan Tech’s Department of Mechanical Engineering-Engineering Mechanics, uses a lot of modeling and simulation in his own research, so he’s been following Altair’s pioneering efforts on that front closely. He visited Chouinard a couple of years ago, “and I was very impressed with the optimization capabilities of their simulation software,” he said.

Predebon returned to Tech determined to make Altair’s simulation software a cornerstone of his curriculum. He found enthusiastic advocates in Van Karsen and Jim DeClerck, a professor of practice in mechanical engineering.

“We want to teach skills that the students are going to need on the job,” Van Karsen said. “This solves the physics problem. It does the math for the students, does it accurately and does it fast.”

In other words, the technology transforms a physics and math problem to be solved into a design tool, allowing students to apply their engineering knowledge and creativity to explore solutions to meet complex design challenges.

DeClerck, who worked in industry, said the software “brings a dose of reality to engineering education. In industry, the question comes down to, is your customer happy or sad? And there’s no equation for that.”

Last year, ME-EM incorporated Altair’s simulation software into its second-year curriculum. This year, second and third-year students are using it. By next year, it will be a pervasive tool from the second through fourth year of mechanical engineering studies.

Second-year students use the Altair software to model and predict the deflection of a truss bridge. Then they build a plastic model of the bridge and compare their results to the software’s. Following that static design project, the students design and model a crane, with its additional dynamic challenge of weight and mass that is swinging around.

Third-year students are using Altair to model an even more challenging project. They are simulating and building a “Harry Potter elevator” that goes up, then moves sideways, then goes up again.

The new simulation approach is a sea change for mechanical engineering.

“When I was a student in the late ‘80s, I might have had one class that touched on simulation,” Chouinard said. Added Van Karsen: “I’ve been an engineer for 40 years, and I certainly didn’t grow up this way.”

But both believe that the new simulation-based curriculum will prepare engineering students for the workplace that awaits them.

“This is a special opportunity to integrate a tool into the curriculum that is beginning to be more and more important in industry,” Chouinard said

Many engineering schools are using Altair software, but Michigan Tech is the first to incorporate it the entire mechanical engineering curriculum. Chouinard hopes others will follow.

“Employers are saying, ‘We need students to come out of university with these skills,’” he said.