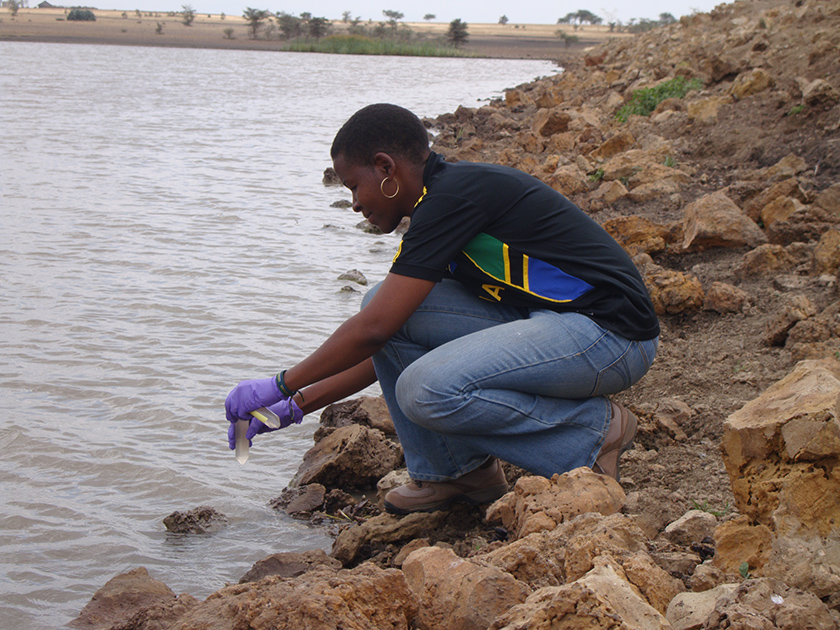 As a girl, growing up in Dar-es-Salaam, Tanzania, she lived with the constant frustration of too little water and ongoing water quality problems.

As an employee of the U.S. Department of Agriculture’s Natural Resources Conservation Service, she helped farmers and property owners identify natural resource concerns and implement conservation practices to preserve, protect, and restore wildlife and a natural environment. Among the most important practices was to design roof runoff structures — rainwater harvesting — and teach techniques to collect unwanted rainfall and move it safely to avoid erosion and flooding.

Now, the naturalist and humanitarian is hoping her life experiences and PhD studies in civil and environmental engineering cascade into sustainability solutions, whether the issue is too little or too much water.

“I have already lived in the middle of water scarcity in Tanzania,” she explained. “There, wells go really deep to find water. In some parts of Michigan, you can find water as shallow as five feet. One of the sustainability solutions I’m learning about is optimizing water collection in both situations, and there’s a lot of civil engineering that goes into that.”

Tula, currently in her second year of doctoral studies at MSU, first came to East Lansing with her husband, Sifa, a PhD student in geological sciences. She initially deferred her advanced education to focus on the couple’s three young daughters. That also gave her an opportunity to work for the NRCS for two years, using what she had learned during her master’s study in water resources engineering at the University of Dar-es-Salaam.

When her daughters all entered school, so did Tula.

“The main thing I have learned is that water resource techniques are at a much higher level here than in Tanzania,” she said. “Water resources management is not a priority in Tanzania, and it has few advocates. For example, most communities have these giant roofs that have a potential to collect a lot of water during the rainy season, but no gutters to collect the rainwater and no place to store it. And yet, families want for water. I am interested in helping provide sustainable solutions for my home country, and I’d like to tackle water quality and treatment in developing a sustainability plan.”

Her efforts to help Tanzania have already begun. They began in 2013 through a project with the MSU chapter of Engineers Without Borders. She served as project coordinator and was part of the EWB team that made trips to Mabibo-Makuburi in Dar-es-Salaam during the construction of a well water distribution system. Thanks to the international collaborative effort, a borehole well system was implemented in August 2014 at the Mabibo External Lutheran Church. It now provides the community with a reliable source of cost-effective, readily accessible, clean water. EWB members also presented lessons on proper health and sanitation to local children and adults.

In 2014, her work continued when she joined the MSU Tanzania Partnership Program to focus on water issues in Tanzania’s poorest rural villages. Working in the village of Naitolia, in Monduli district in Arusha, she joined an effort to develop water resources through water access, sampling, and testing for contamination. Villagers were also educated about cost effective and simple ways to treat drinking water while longer-term solutions were created. This international project continues to involve MSU undergraduates in a study abroad program.

Her efforts in Tanzania are continuing in 2016, with research for her dissertation taking her home to Dar-es-Salaam to examine water problems in both urban and rural settings.

“Whether it’s urban issues in Dar-es-Salaam or rural issues in Arusha, it’s the same problems – scarcity and water quality – we just have to look at them in different ways,” she said. “The problem in rural areas is contamination from sharing water sources with animals and the lack of toilets, which causes contamination from the run-off every time it rains. In the urban areas, we deal with surface and groundwater contamination from human waste due to poor sanitation practices. Hopefully I’m helping, because I know I’m learning.”

(In the photos above, Ngasala is at work in the village of Naitolia, Tanzania, with Daudi Mollel.)